Speaking up for the world's poor and oppressed Speaking up for the world's poor and oppressed

Captain Simone Smalley (back row, second from right) was one of three Salvation Army representatives at Micah Australia’s Voices for Justice event in Canberra this week.

Three Salvationists joined other Christians from around the country at Parliament House in Canberra this week to advocate for the world’s most poor, vulnerable and oppressed.

Captain Simone Smalley, Corps Officer at Heathridge in Western Australia, Major Uraia Dravikula from Fiji, and Steph Elkington from Camberwell, Victoria, were an active part of Micah Australia’s ‘Voices for Justice’, an annual event that brings together a diverse range of people from all denominations and backgrounds who share the same passion: to speak up for the world’s poor.

Micah Australia is a coalition of churches and Australia’s largest Christian non-government organisation.

The 250 delegates attended a two-day training conference last weekend to prepare them to meet with and lobby politicians from their local areas throughout Monday and Tuesday this week. More than 90 appointments were scheduled.

Church leaders from the Pacific region, including Major Uraia, were invited to share the issues impacting their vulnerable communities, including those that are affected by the decisions of larger, and more wealthy, neighbouring countries.

“Micah Australia specifically asked the Pacific leaders what they needed, and we took those recommendations into our meetings,” said Simone.

“These were focused around climate change, the Step Up program that helps address rampant violence against vulnerable women and girls, and reviewing Australia’s overseas aid budget.”

Stephanie said it was extremely powerful to hear the Pacific leaders’ voices.

“They are not asking for a hand up or a handout; they want to partner with the Australian Department of Foreign Affairs and Trade and engage with them, but measure their success as a nation based on their tools and achievements. 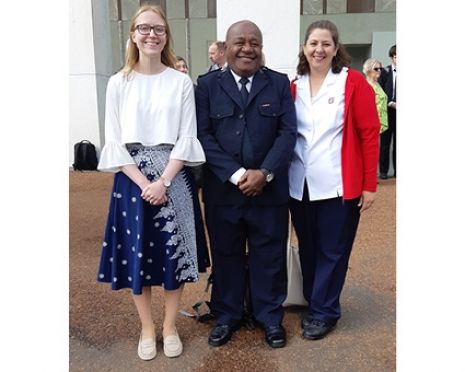 “It was also amazing to hear them ask for continued funding for a Bible study, for both men and women, which addresses the rampant issue of violence against women and children. Church leaders in the various island nations have brought this training to their people – 90 per cent of whom affirm a Christian faith – which has had a massive impact on reducing the level of violence.”

The Salvation Army delegates were encouraged by the opportunity to continue the movement’s partnership with Micah and lobby the government on profound social justice issues.

“I have been so inspired and challenged by this event,” said Simone. “Social justice is my passion, and so being able to develop my skills in this area and learn from such expertise has been incredibly motivating.

“It’s a privilege to hear directly from our Pacific family, to see Micah’s engagement with our government, and to be a part of this.

“As Christians, our faith propels us to act for justice and to speak up when there is an injustice to the marginalised and oppressed. It’s a key part of our faith. We really can lobby the government for the things that honour God’s heart.

“As churches, we are connected and we have so much more that unites us, not divides us, as one voice. It’s amazing.”

All event delegates will return to their electorates and continue lobbying for the recommendations brought up during this week.

“After such encouraging and empowering training, we’re not stopping here,” said Stephanie. “We will lobby for what we believe in. I have met with my local member here and will continue to build that relationship and address further recommendations.

“Politicians are elected to represent us, and it’s really important to share our values with them and what we believe needs to be done.

Simone will reconnect with her Western Australia lobby group when she returns from Canberra.

“The meeting with the member for Curtin was cancelled, so we are hoping we can reschedule this and stay in touch with our group,” said Simone. “Each of us has roles that connect us with the community.”

For more information on Micah Australia and Voices for Justice, click here.