SAES recognised for work at the fire front 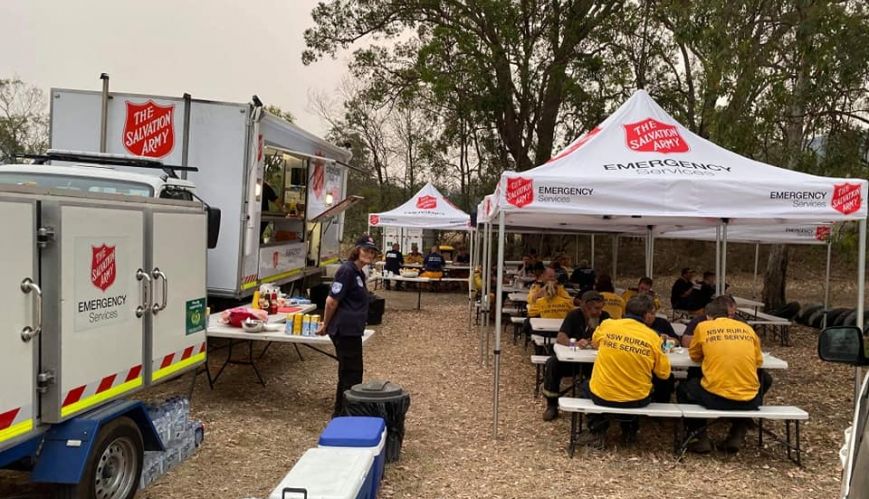 SAES recognised for work at the fire front

The Salvation Army Emergency Services (SAES) has been honoured at the 2019 National Pride of Australia Awards, hosted by News Corp Australia and Australia Post, for its work supporting firefighters and people impacted by the ongoing bushfire emergency.

As part of the awards, News Corp Australia pledged $25,000 to support the SAES.

The Salvation Army General Manager for Strategic Emergency and Disaster Management, Major Topher Holland, said the honour goes not just to the SAES but to Salvos in all of the local areas affected by the bushfires who have stepped up and responded.

“It’s times like these that we live out our vision statement, that where there is hardship and injustice, we will live, love and fight alongside others,” he said.

“In this unprecedented and unrelenting fire season, our teams have worked extremely well ... they don’t do it for any kind of reward but to get this recognition is an encouragement and an honour.”

Crews are serving around 2000 meals a day at a bushfire that threatened homes north of Perth.

The Salvation Army Strategic Emergency and Disaster Management Coordinator for Western Australia, Ben Day, said the past four weeks had been busy for teams, with many volunteers already stretched due to Salvation Army Christmas Cheer operations.

“Please pray that our volunteers and staff can manage our fatigue and that the fires are brought under control quickly,” he said.

Over the weekend, Western Australia Premier Mark McGowan visited Salvation Army Emergency Services teams at the fire-front to give them a morale boost.

The state has had numerous days with temperatures spiking above 40 degrees and Ben expects teams to be required to support fire crews for some time yet.

“This is the start of summer for us and we have a long way to go. We expected a busy fire season this year, but we probably didn’t expect it this soon.”

Teams are still serving meals to fire-fighters at the Wollombi bushfire in the Hunter Valley, with all other teams on stand-by as conditions continue to change at short notice, impacting other bushfires across the state that are still burning.

“The effort and commitment from our SAES volunteers continues to be exceptional,” said Norm Archer, The Salvation Army Strategic Emergency and Disaster Management Coordinator for NSW/ACT.

Salvation Army Emergency Services teams have been activated at Mount Maria in central Queensland. SAES volunteers from Gladstone Corps are supporting more than 80 fire-fighters with meals and are expected to continue to do so for the next few days.

"It's a great team and we just love supporting our community and the firies," said Gladstone Corps Officer, Lieutenant Chris Ford.