Spirit of Christmas lives on in Salvationist figures Spirit of Christmas lives on in Salvationist figures

Myer celebrated 100 years with Christmas window displays in Melbourne with a stunning setting of A Christmas Carol.

The words of Charles Dickens’ A Christmas Carol have transcended time, captivating the religious and secular world alike.

Set in Victorian England, the image of Salvation Army bell-ringers, resplendent in full uniform, was appropriated by storytellers in the United States to accompany the tale of Scrooge and Tiny Tim.

At the turn of the millennium, we saw this intersection of Dickens’ most famous work and The Salvation Army come to life in Australia, when Myer celebrated 100 years of its Christmas window displays in Melbourne with a stunning setting of A Christmas Carol.

The first window meticulously showed what the story would have looked like in Bendigo – the birthplace of Myer – at the turn of the century.

And once you looked past the shrivelled face of Scrooge, you noticed two figures melting into the background – a woman and man dressed in Salvation Army uniform.

A timbrel is poised in the woman’s hand and a bell in the man’s, as the pair seem to ask locals to support those in need over the Christmas season.

Today, these two figures live in the storied shelves of the Salvation Army Museum in Melbourne – only a few hundred metres from their original home in Myer on Bourke Street.

Crafted lovingly by production designer John Kerr of Stage One Production and 30-40 artisans, they were viewed as part of the Myer Christmas Window Display in 2000 for six weeks. 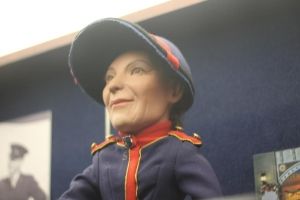 Over this time, hundreds of thousands of people bustled through the Melbourne CBD, readying themselves for Christmas Day.

While many display pieces were recycled, becoming iconic characters in the 2001 movie Wind in the Willows, John and his team decided these humble Salvo figures deserved some posterity.

And, so, they were donated to The Salvation Army Museum.

Today, they stand beside an exhibit of the flying padre, unwittingly drawing attention to themselves due to their craftsmanship and unassuming stance.

While they celebrate the role of The Salvation Army in an iconic anniversary for the City of Melbourne, they also encapsulate the spirit of so many Salvationists who went before us, braving the harsh conditions of Victorian England to embody the true meaning of Christmas.

Just as Dickens’ Tiny Tim did in the historic story when he was recounted as saying, “The people saw him in the church, because he was a cripple, and it might be pleasant to them to remember upon Christmas Day, who made lame beggars walk, and blind men see”, these figures remind us that a traditional Christmas story finds its true meaning in the incarnation of our Saviour.