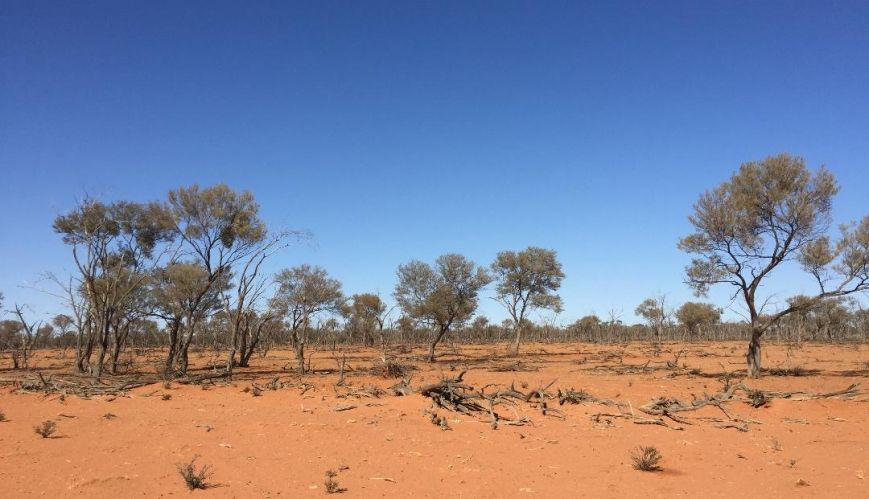 More than two-thirds of Queensland has now officially been drought-declared, with no meaningful rain in sight. Bushfires are also a real and ongoing threat.

“This farm has been in my family for four generations, but I am not leaving my kids an inheritance, it’s a liability,” one farmer in western Queensland said to a Salvation Army worker at a recent community engagement event in Warwick, 200km south-west of Brisbane.

During the two-day event, different expressions of The Salvation Army worked together with other agencies to bring some relief and hope to Warwick and the surrounding farming community.

This barren and parched land is part of the two-thirds of Queensland that is now officially drought-declared.

“The local Southern Downs Regional Council organised the community day, and we were there to assess and assist the farmers with round two of the Drought Community Support Initiative Funding,” said Major Sue Hopper, Strategic Emergency and Disaster Management Specialist, Queensland Division. 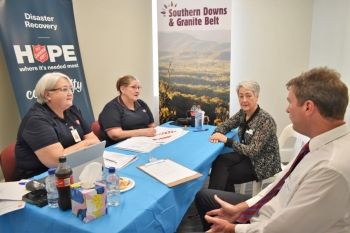 “This funding provides financial help for farmers currently suffering from the hardships of the drought, offering emergency payments of up to $3000. Those eligible for the funding include farmers, farmworkers or farm suppliers and contractors.”

During the event, Sue, along with Warwick Corps Officers Captains Leanne and Richard Hardaker, saw more than 70 farming households.

“It’s desperate out there, so it was good for all the organisations to come together and help the farmers,” said Sue.

“Most of them now are selling off stock, including breeders, just to survive. They are buying hay and water, and many are making decisions as to whether they will be able to sustain this until the drought ends.

“No two of their stories are the same, except for the overriding issue of hardship. There are elderly people, over 70, physically working hard and facing multiple and complex issues with physical and mental health, stress and exhaustion. 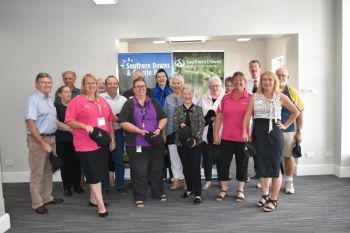 The Salvation Army worked together with other agencies to assist the farmers.

“One single elderly lady says she can never retire, she just needs to keep punching on to keep the farm her parents left her. It’s either that or walk away with nothing.

“Children are pitching in to help their families and trying to make it all work. The kids have the same stresses as the adults; there is no sugar coating what is going on.

“In another family, the parents have jobs off the farm, work all day, and then again at night and weekends on the farm, as well as looking after children. It’s overwhelming.

“We can’t give a lot in terms of finances, but we helped where we could, as well as offered a listening ear, support and hope, especially at this time of year.

“One man said that thanks to the money we could give him, his kids would get presents for Christmas. Another lady would only take the money when she knew it was government and not Salvation Army funds as ‘The Salvation Army helps people worse off than me’.”

Leanne and Richard were able to connect with several farmers to assist with additional gift cards and presents for children.

“The issues they face are so huge,” said Leanne. “I’m not a country girl, but when I see these people selling their breeders, I don’t know where the future of the cattle and sheep industries will be.”

Some of the farmers have also been impacted by recent bushfires, including one couple who left their home to come into the community day, with firefighters bulldozing around their home to help protect it. 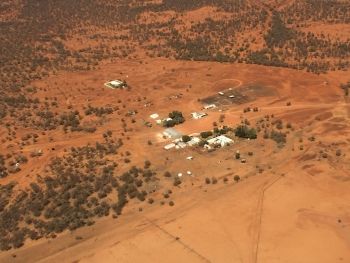 Farmers struggling in the drought face huge and ongoing challenges.

“It’s a double blow for these people and they just keep on going, doing what they can,” said Leanne.

“We are just trying to reach out to people, encourage social connections, and let people know they are not alone. We also want to let people know that we are there and available for them as The Salvation Army.”

The Hardakers pastor the Warwick Corps and Stanthorpe congregation, as well as oversee three Family Stores in nearby towns. A fulltime drought worker also operates in the area, showing the desperate nature of the situation.

“It was great to meet some of the farmers and those who live on the outskirts of town because we don’t often see them,” said Leanne. “To be a part of helping them in some way was great.

“It was also humbling, sitting with people who’ve worked hard all their lives and are now crying because they’re desperate and have never had to ask for help before.

“Getting to know other professional agencies in the community was also useful as we are more aware of what help is out there for people.

“We didn’t know we would walk into this, but focusing on the drought and its impact has increased our potential in the community. It’s the church standing up and wanting to make a difference.”

For the Stevens’, this was part of a three-week visit to drought-afflicted areas across Queensland, travelling in their Strategic Emergency and Disaster Management mobile home.

At the request of the Department of Communities, Disability Services and Seniors, the Stevens’ provided financial and emotional support to smaller communities in the outer areas of the recent bushfires – communities that had been greatly impacted by the fires, but were not necessarily eligible for any government assistance.

The North Brisbane Corps gave a generous water donation to Warwick Corps to distribute to farmers. This also enabled them to hand out their contact cards and assure people of their availability and support. 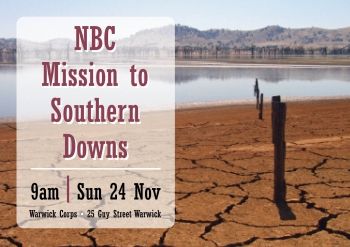 Leading the Sunday service was part of the mission weekend.

“Our phone has not stopped ringing since, and we’re helping with toys, food and extra financial assistance,” said Leanne.

North Brisbane Corps also sent a group of volunteers to Warwick for a weekend, intending to stay locally and spend on meals and accommodation to help support the community

They took over the local laundry in Stanthorpe and paid for people to come and drop off their clothes to be washed and dried; they gave out free gas cylinders and, while Rotary provided a barbecue, the volunteers made tea and coffee.

One of the volunteers from Stafford Corps, Brisbane, a teenage girl who is state champion for her age group in the 400m, started chatting with a family who came into the laundry and ended up going out to their Little Athletics training, encouraging the children and sharing Jesus.

The Brisbane team also led the Sunday service in Warwick and bought pizza for everyone for lunch.

“The visitors were spending time with the locals, encouraging them, listening to them, it was very humbling,” said Leanne.