Salvation Army recovery operations are well underway across parts of Australia that have been affected by the devastating 2019-20 bushfires.

Norm Archer, The Salvation Army Strategic Emergency and Disaster Management Coordinator for NSW/ACT, said Salvation Army Emergency Services (SAES) teams remained active as required across many states despite an easing of the bushfires. 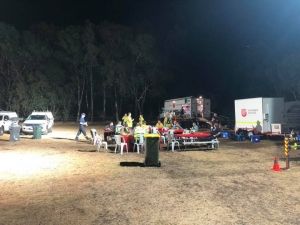 Salvation Army Emergency Services volunteers providing meals for firefighters and other responders working at the scene of a bushfire south of Perth.

“We are still responding to requests for assistance as they arise due to changing weather conditions on active fire grounds,” he said.

In Western Australia, teams have recently been deployed at Karnup, south of Perth, to feed 280 firefighters, police officers, State Emergency Services personnel and other volunteers who are working to contain a bushfire in the area. In Perth, at Bullbrook, a team fed firefighters responding to a blaze near the RAAF Airbase.

The Salvation Army’s emergency response in Victoria continues as needed and SAES teams in South Australia are moving towards providing long-term support for locals on Kangaroo Island and at Cudlee Creek.

In Tasmania, the SAES was called out to a fire in Winkleigh, north of Launceston, last Friday that was brought under control.

And in Queensland, SAES teams are now on flood-alert as monsoonal conditions threaten various areas throughout the state.

At Bega, Corps Officer Captain Deb Parsons has been distributing Salvation Army recovery funding since the centre opened a few weeks ago. She said The Salvation Army was able to assist a broad range of people, some of whom had “fallen through the cracks” due to complex circumstances.

“It’s about listening to their stories, hearing their hardships and identifying – with them – the needs that they have,” she said. “Some cases are not straightforward and fall between the cracks, or in the ‘too hard basket’ ... and that’s exactly where The Salvation Army needs to be because that’s where Jesus is always found – standing alongside those that others have passed by.”

Deb and her husband [Captain Rod Parsons] have been visiting bushfire-affected properties in the area. Recently, they delivered water, food and pet food to Lindy Marshall, whose home was destroyed (main photo above).

“She and her four dogs are living in her garage with no water and no power,” said Deb. “Her insurance is happy to pay for emergency accommodation, but there is nowhere she can go with her dogs.”

Captains Leanne and Lincoln Stevens, the Associate Strategic Emergency and Disaster Management Coordinators for Queensland, have spent the month of January travelling through Northern NSW supporting small communities impacted by drought and bushfires. 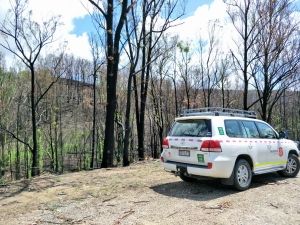 “As we interviewed people, we frequently heard people say, ‘There are people worse off than me’,” said Leanne Hardaker. “For some reason, people felt that if their house was still standing, that they didn’t deserve financial assistance.”

She said, on the surface, recovery work was about distributing the funds needed to assist people as they move forward after a disaster. But she’s convinced that, just as importantly, the act of listening and caring for people who tell their stories, was just as powerful: “People recounted the day [that the bushfire hit] as the fiercest fire ever seen in that area.

“One man told me that his house burnt down in four minutes. The fire was described to me as a ‘monster’ and ‘evil’. One gentleman even called it the ‘devil’. No matter what people lost, the trauma was very apparent in so many of the people we met with. There were many tears as people described the hellish one-and-a-half hours that took everything from them.”

In parts of Northern NSW, the bushfires of late 2019 hit as a secondary disaster, with farms and communities already impacted by the long-term drought.

“As money was distributed in that town, I became convinced that The Salvation Army is afforded the opportunity of listening,” said Leanne Hardaker. “People may forget monetary gifts and physical help over time. However, the human heart does not forget genuine encounters of love and compassion when offered by the people of Jesus at just the right time.”

Bushfire activity has significantly decreased across the state over the past couple of weeks, allowing Salvation Army staff and volunteers to support people who are either reluctant to ask for help or are overlooked.

“We’re continuing to respond to the needs of those impacted by the fires, wrapping a blanket of support around communities and picking up people who fall into the cracks, such as fruit pickers and other transient workers,” said Captain Rob Champion, Strategic Disaster and Emergency Management Specialist with The Salvation Army.

“We’re also assisting a number of graziers who have come across the border from New South Wales.”

Remnants of December and January’s fires across the East Gippsland region continue to flare up, and the SAES is on-call to support firefighters manning between 80 and 90 fire trucks in the area.

“We need to be ready in case of evacuations, [but aside from that] we are actively engaged in recovery through the centres and outreach, and helping people as we encounter them and meeting their needs,” said Rob.

The Salvation Army has a presence in centres at Corryong, East Gippsland and Bairnsdale, where trained staff are conducting face-to-face assessments, offering financial assistance and providing a listening ear. There are also six recovery workers on the ground, liaising with locals and other services to debrief and provide support.

As roads open up to Cann River and Mallacoota, The Salvation Army is working with government agencies as part of the initial response to distribute aid.

Captain Simon Mapleback, Brimbank Corps Officer, has been assisting with relief efforts at Bairnsdale and has witnessed the huge emotional toll the disaster has taken on people.

“There was one gentleman, aged 91, who shared a property with his son that was surrounded by national parks. They each had a home on the property and both were destroyed. Rebuilding will take from five to seven years, which was devastating news for the older man to hear, and really confronting. ‘I’m not going to see that’ he said.”

As locals come to the recovery centre with a variety of needs and responses, Simon and other staff provide them with aid, link them with other services and are simply there for them. According to Simon, there is a range of people coming in – large families, single parents, members of the homeless community.

“One man came in today and he was struggling to deal with what had happened. It wasn’t just the bushfires and being evacuated, but general life that was still going on with all its issues,” said Simon.

“He was almost at breaking point, working out whether he could go on. We talked for an hour. I told him the good things happening in his life – what he means to his kids especially. He needed to hear that.”

Referring to the collective effort as “emotional first aid”, Simon sees it as his responsibility to check on people spiritually and mentally too.

“God brings people together at the right place and the right time. Community comes together too,” he said. “It’s amazing to see people coming together, whether they know they are being used by God or not. The community is being used to heal itself.”

After a mammoth bushfire season that saw Cudlee Creek (Adelaide Hills) and much of Kangaroo Island devastated by fires, Salvo volunteers in South Australia are moving into recovery mode. 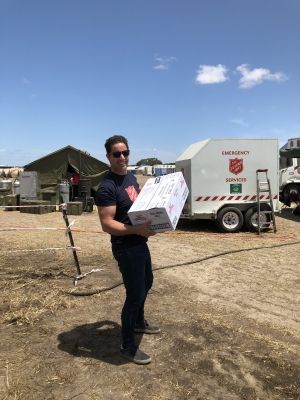 Volunteers and staff on Kangaroo Island are assessing how they can support the community with relief over the next 12 months.

Heavy rains over the weekend washed out the fire-staging area in Kingscote and eliminated the need for emergency services, giving the SAES opportunity to assess what their recovery work will look like over the next 12 months.

“We are still very active in the middle of Kangaroo Island, and in Cudlee Creek, and we are still doing emergency assistance payments,” said Mark Foyle, Public Relations Secretary for South Australia/Northern Territory Division.

“At this stage, we need monetary donations and prayer – we don’t need physical assistance as much as we did over the past four weeks on Kangaroo Island,” he added.

The Salvation Army is expecting people affected by the fires to seek support in the coming months after the initial shock of the disaster wears off. The Salvos’ 12-month proposal will detail how they can best assist.

“We appreciate everything people have been doing for us in South Australia, and we want to thank everyone who came and volunteered for days on end to help out,” said Mark.

Captains Leanne and Lincoln Stevens have been travelling around the state to meet with people and deliver assistance. 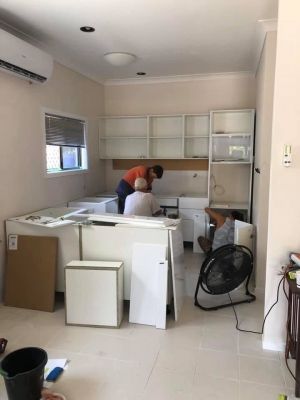 The Salvation Army is partnering with other churches and agencies to repair homes in Townsville one year on from devastating flooding in the city.

In Townsville, long-term flood recovery efforts are still underway one year on from floods that inundated hundreds of homes in the North Queensland city. The Salvation Army is part of the ‘Community Rebuild Project’, a combined churches and inter-agency initiative that has identified dozens of homes whose occupiers need assistance in rebuilding.

Late last year, with Department of Communities funding, The Salvation Army partnered with The Oasis, a charity that supports members and ex-members of the Australian Defence Force for ‘Operation Townsville Assist’. The operation was a pilot project and part of the Community Rebuild Project, during which five flood-affected homes in Townsville were repaired.

“The ex-servos from Oasis have been amazing,” said Leanne. “The statistics of how much time they have provided is astronomical. The savings of dollars because people didn’t have to pay labour is incredible. Some of the things they did [during Operation Townsville Assist] have been putting gyprock back on walls, help with painting or help to put vanities in or putting wardrobes together.

“It’s ongoing. There’s another 40 houses that we have identified that need help, some sort of assistance in rebuilding.”

An SAES team was called out to Winkleigh, north of Launceston, last week after a bushfire flared up. They assisted State Emergency Services for a short time, while the public was evacuated to Exeter, 20 minutes from Launceston. The fire has since been contained and the evacuation centre shut down.

“At the moment our recovery response is on the East Coast; that’s where the biggest fires were and two homes were lost. It’s all very low key though,” said Major Brad Watson, Public Relations Secretary for Tasmania.

The Salvation Army has put out a request for personnel (staff and officers) who can spend a week at a time in bushfire-affected areas in Victoria and NSW to assist with The Salvation Army’s recovery efforts.

“There is an urgent need to relieve our teams on the ground,” the request stated.

Those interested would need to undergo basic training and be comfortable supporting people who had been traumatised.

Interested people should speak to their line manager and make an application by emailing Sue Hopper at sue.hopper@salvationarmy.org.au