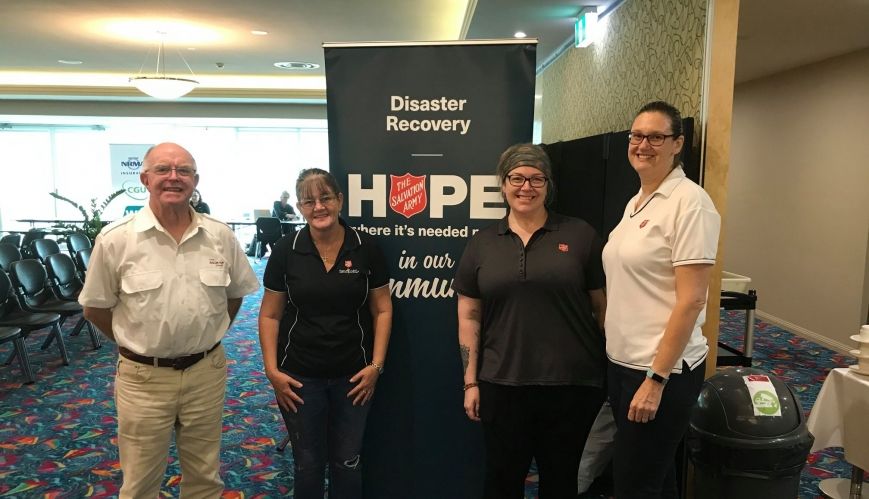 The Salvation Army has progressed to the recovery phase of its assistance during the national bushfire crisis, thanks to the generous support and contributions of the Australian public.

“The focus of The Salvation Army’s work now is to provide support to people who have lost everything in this disaster,” said Communications Secretary Lieutenant-Colonel Neil Venables.

“Our experience tells us that up to 70 per cent of donated funds will need to be spent in the recovery stages – that is, anywhere from now up to two to three years.”

Since the first response in September, The Salvation Army has distributed $11.9 million of the more than $18 million that has been received and banked from the national Bushfire Disaster Appeal.

More than $7 million has gone towards immediate emergency and relief efforts for first responders and evacuees, while $4.86 million in hardship payments have been distributed to people in need.

“We have been overwhelmed by the support and generosity of Australians from all walks of life and stand by our history of getting donated funds to those in need, as fast as possible,” said Neil. 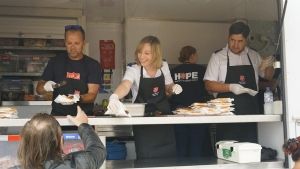 Salvation Army personnel and volunteers serve a meal at Batemans Bay on the NSW South Coast in late January, 2020.

“We’d like to acknowledge the significant support of Woolworths, our national disaster partner and their S.T.A.N.D* (Support Through Australian Natural Disasters) program, as well as the generosity of their team and customers.

“It all means the Salvos will be equipped to stand alongside Australians who are rebuilding their lives and communities after this wave of natural disasters.”

The Salvation Army Emergency Services (SAES) is still operating at four official recovery hubs in New South Wales and three in Victoria while providing an outreach service on Kangaroo Island in South Australia.

The Salvation Army is establishing a dedicated Bushfire Recovery Team, nationally coordinated and locally embedded. The team will lead the Army’s engagement with federal, state, regional and community groups.

Bushfire Recovery Team services will include financial assistance and counselling, a dedicated telephone line where workers can assess and deliver material aid, outreach workers embedded in local communities across NSW, Queensland, Victoria and South Australia and caseworkers based in communities to deliver holistic assistance, including financial, emotional and psychological responses.

Australia’s disaster season is far from over as flooding rains create new challenges to be met by the SAES, which operates in a 24/7 state of readiness.

The Salvation Army encourages anyone in need of assistance to reach out immediately. For details visit salvationarmy.org.au.

* S.T.A.N.D. (Support Through Australian Natural Disasters) raises funds to help the community with disaster preparedness, response, recovery and resilience. Woolworths accepts donations at its checkouts and through the sale of the S.T.A.N.D. branded water.