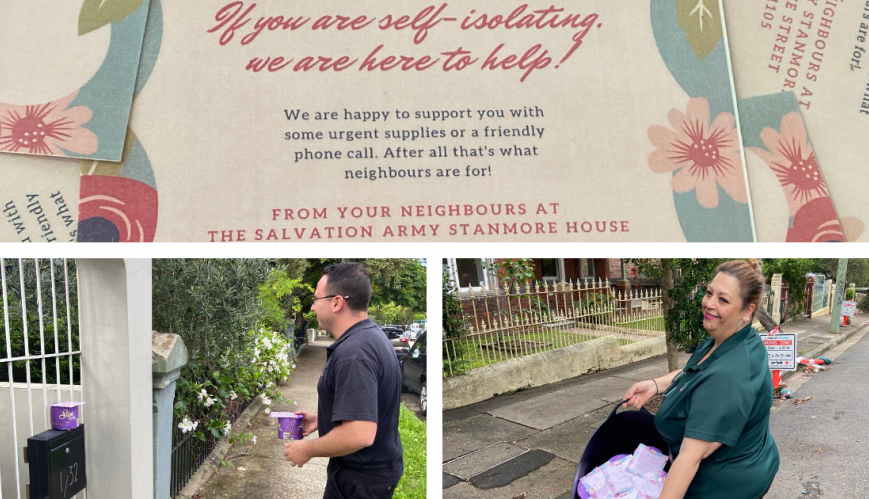 As Australians grapple to keep up with the changes to home, work and community life as a result of the coronavirus outbreak, The Salvation Army across the country is also changing its practices but continuing to ‘live, love and fight’ in local communities.

This afternoon in Sydney, Major Nicole Viles, manager of Stanmore House (Salvation Army conference and training centre) and her staff hit the streets to show love to their community, dropping a gift of toilet paper and a card to the doorsteps of their local neighbourhood. The card read: “If you are self-isolating we are here to help!” with details including Stanmore House phone numbers. 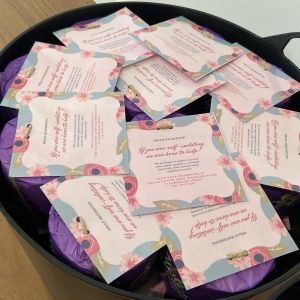 The toilet paper and cards that Stanmore House staff left on their neighbours' doorsteps.

“I was reading in my devotions today about St Patrick and who he was and that he was about fighting for justice,” said Nicole. “So, the devotion today was all about, ‘What is your call to justice? What can you do? And as I was praying about that, I was asking what our mission here at Stanmore House will be in this season, and God told me to reach out to our neighbours.”

She said she spoke to staff about it and they decided to be generous with a box of toilet rolls. The team is hoping the small gesture of love will cut through the fear and uncertainty many people are feeling at this time.

Across the city at The Salvation Army Streetlevel Mission, Team Leader Mitchell Evans said he and other team members were trying to work with the community to be a source of truth in this confusing time.

“There is a lot of misinformation at the moment that is portrayed as truth and this is incredibly dangerous,” Mitchell said. “Social media can be an incredible tool for people to connect, but what we’re seeing at the moment is this becoming a platform for conspiracy theories, crackpot remedies and fear-mongering.

“Practically speaking, we’re encouraging the community to practise good personal hygiene, something we do anyway, and to look after themselves and one another. This is what being a community is all about – celebrating the good times and also coming together and supporting one another in the tough times. We will get through this. We just need to ensure we keep our humanity in the process.”

While COVID-19 is impacting the way The Salvation Army is operating, mission and ministry are still going ahead across Australia.

At this stage, most corps are still meeting on Sundays. Wollongong Corps, south of Sydney, was one of the majority of corps that met last Sunday, with extra precautions in place. These included encouraging people to wash hands and use hand sanitiser, and not to attend the meeting if unwell.

“We will be having a no-touch policy,” Corps Officer Major Phil Inglis wrote on the corps Facebook page. “I know the Bible says to greet each other with a holy kiss – I want to recommend that a holy kiss means a whole lot of space between you, so air kiss like you’re a diva!”

The corps encouraged those at home to continue to connect with Sunday worship through its regular live-streaming service, a medium also being used by other corps.

Auxiliary-Lieutenant Debbie Bartlett, who could not get to her meeting in the Blue Mountains, west of Sydney, on Sunday, said: “It was just really good that I could be at home but I didn’t miss out. I could go about being a mum and caring for my son who was unwell, but I still felt like I had quality church time.”

Many other corps across the territory already live-stream their services.

“This a good chance for us to starting think of new creative ways of doing church and being church,” NSW/ACT Divisional Commander Lieut-Colonel Miriam Gluyas said. “How will we engage, how will our engagement be wider and more effective? How will people know that we are Christians by the way we live, how we act, and what we do? How do we balance social interaction and social media? How will we create real community in these times?”

Many corps, like Carindale Corps in Brisbane, have paused all programs. “This includes dance group, playgroup, youth and young adults services and events, Mainly Music, Just Brass, Friday Kids and all other ongoing activities and events,” reads a post on the corps Facebook page, which also noted that Sunday worship and the Family Store will remain open “until further notice”. 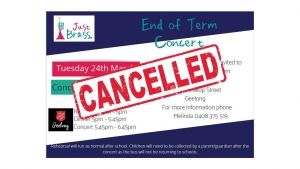 Many Salvation Army corps, like Geelong in Victoria, have cancelled ministries.

However, not all corps have taken the same approach. Some, like Mainly Music at Shellharbour Corps in the Illawarra, and ‘Jitterbugs’ playgroup in western Sydney, are remaining operational, but have taken extra precautions, as outlined on the Greater West Salvos (Sydney) Facebook page: “We ask that you bring your own packed morning tea so that we are not as a group handling food. Tea and coffee will still be provided. Hand sanitiser will be available at the registration table when you sign in and be assured that toys and equipment will be disinfected after each session later that day.”

Shellharbour Corps Officer Lieutenant Jess Farthing said it’s prudent to take precautions: “While I understand that we ‘don’t want to live in fear’, I think it’s important to show our community that we are doing our best to keep them safe by making some small changes.

“It doesn’t hurt to clean our equipment. It doesn’t hurt to serve individually wrapped food. That’s not living in fear, it’s empathising that these are uncertain times for a lot of people, And we want our church to be seen as a safe place,” she said.

Many Salvation Army corps and centres are having to re-adjust the way they deliver regular meal services for people in need. Most are reporting two-fold reasons for this – not just the impact of coronavirus and its potential for transmission, but also due to panic buying and the inability to source food for large numbers of people. Some, like Caloundra Corps on Queensland’s Sunshine Coast, opted to give packaged meals away instead of having a sit-down meal service.

The Salvation Army is continuing to monitor the situation and update its processes accordingly. A statement released on 16 March by Chief Secretary Colonel Winsome Merrett stated: “Our work with the community, particularly vulnerable members of the community, commands us to take all potential risks seriously. We have a team of senior leaders meeting regularly to discuss our ongoing response and ensure we closely follow all advice received from Australian medical authorities, as well as the World Health Organisation (WHO), regarding precautions that are needed to minimise risks associated with COVID-19.”