Allan Border goes into bat for the Salvos Allan Border goes into bat for the Salvos

The Salvation Army has received a welcome boost to its national Bushfire Relief Appeal with solar power company Sunboost handing over a cheque for $18,400.

Former Australian and Queensland cricket captain Allan Border, who is the public face of Sunboost, presented the donation to Major Neil Dickson at Queensland Divisional Headquarters earlier this month.

The money will be added to the more than $43 million Australians have so far pledged to the appeal.

The appeal was launched on 9 November last year. So far $37.3 million of the pledged $43 million has been received and more than $22 million distributed to where it is most needed.

“(The donation) is an indicator of the generosity of Sunboost and their intention to show good corporate responsibility and, more particularly, to think about people affected by the bushfires,” Neil said. “The Salvation Army has been doing several things in the course of bushfire relief and recovery. Initially, we were providing catering services in 165 locations across Australia.”

“That took our attention in the early days,” Neil said. “Now we are in the recovery phase of helping families who really need financial support. We are assessing each family individually and determining what level of assistance we are giving so the $18,400 will go directly to helping those families.

“We know that this is going to be a long haul. It’s not going to be over in a few weeks or months. We’re committed to being there with people who are really struggling and need support like Sunboost has recognised.

“We know that Aussies love sport and it’s great that ambassadors and Aussie legends like Allan Border get on board with a cause like this.”

This is the first time The Salvation Army in Australia has tackled a major crisis as one territory and set up a nationally co-ordinated and locally embedded Bushfire Recovery Team. The processing of the donations is the focus of the team, which is providing support primarily to people who have lost everything.

The Bushfire Recovery Team’s services include financial assistance and counselling.

When handing over the cheque, Allan said that it was good to have a successful business but with that success must come corporate and social responsibility.

“We know The Salvation Army does great things in the community and, in general helping people out, but certainly this as an opportunity for Sunboost to do something and show corporate responsibility; to put something back into the community,” Allan said.

“There has been an incredible outpouring from the Australian public (to support the bushfire-affected). The amount of money that’s been raised has been quite extraordinary.

“It’s a long-term fix. It’s not going to be fixed overnight. The damage has been catastrophic so it’s going to take a while but those funds that have been raised and continue to be raised are going to a lot of those communities who are going to be doing it tough for a long, long time – not just the short term. Aussies are a pretty resilient people. Over time, they will bounce back stronger than ever.”

Allan also said the Army had a strong reputation for the way it used donated funds. “Everything that comes in gets used in some way shape or form; to help people affected by the bushfires. They’ll put it to good use. They always do,” he said. 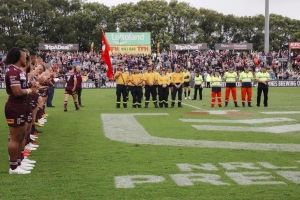 Salvation Army Emergency Services volunteers were recognised for their efforts over the bushfire season during the first round of the NRL, where collections were taken to support The Salvation Army Bushfire Appeal.

Salvation Army Emergency Services volunteers were recognised for their work in the community at the height of the bushfires and collected donations for the appeal at all first-round games of the National Rugby League (NRL).

Captain Bradley McIver (NSW Public Relations Secretary) said it was the first public evidence of a new national partnership agreement the NRL, which had signed as one of the Army’s disaster support partners.

Brad said each NRL club had the opportunity to nominate where the money collected at their home game was to be used – fire, drought or flood. While the Sydney clubs chose to target bushfire-ravaged Australia, the North Queensland Cowboys wanted the money used in flood-related relief because the Army is still working to support people affected by the Townsville floods of early 2019.

About 25,000 fans were at the first game of the round between the Paramatta Eels and the Canterbury Bulldogs at Bankwest Stadium, Sydney, on Thursday 12 March, but, as COVID19 restrictions and concern began to widen, the Army made the decision to not collect at the last game of the round.

Brad said, although crowds were good at the match at Brookvale Oval between Manly Sea Eagles and the Melbourne Storm, it had been decided well before that game not to fundraise there.

“The beautiful thing at Brookvale was that our SAES volunteers along with the Rural Fire Service volunteers were actually honoured on the ground as part of the pre-game,” Brad said. “It was good to have the profile and the recognition of our volunteers.

“The bulk of the volunteers at the games were SAES personnel and so, not only did they get to be part of the fundraising, but also had an opportunity to be recognised for their efforts throughout the bushfires.

“It was a nice way for the NRL and various clubs to honour our volunteers whilst also providing the opportunity for a few dollars to be thrown in the bucket along the way.”

People who have been affected by the recent bushfires and looking for support should contact the Bushfire Recovery Team by email at sal.disasters@salvationarmy.org.au or by telephone on 1300 662 217.