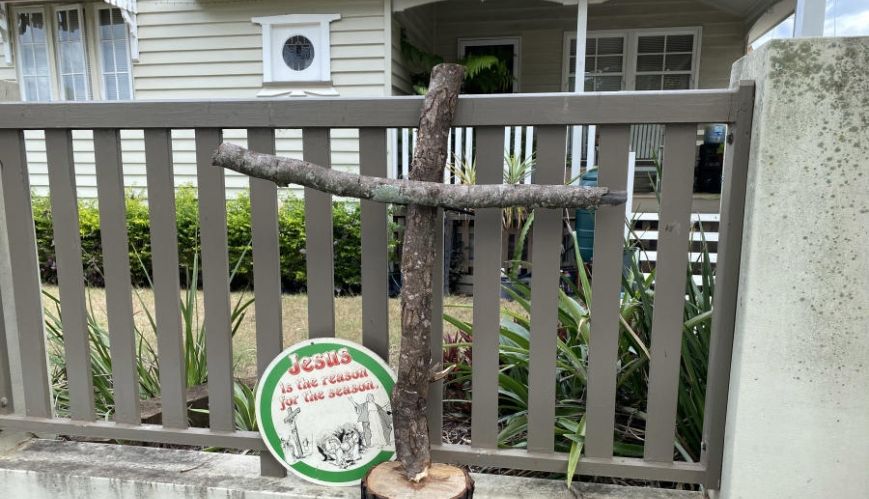 Individual homes across Australia are telling a collective message: Jesus is the reason for the season.

Easter is one of the two most significant commemorations on the Christian calendar – the other being Christmas.

With strict COVID-19 restrictions in place, Salvation Army corps, centres and missions across the country are finding ways of witnessing to their neighbours to the death and resurrection of Jesus Christ.

From Sydney to Perth, Torres Strait to Hobart, people in Salvation Army faith communities across the country have been scrambling to prepare online services and virtual meetings for some time – all which take far more time to prepare than the traditional activities.

Dawn services in parks and gardens cannot take place and indoor meetings are definitely off-limits so the call has gone out for individual Salvationists to turn their homes into testimonies that Christ has risen.

Salvationists have been quick to get behind wider community ideas such as the bear hunt campaign and Anzac Day but need to put as much energy into how they can reach the community with the Easter message, which is considered just as important.

On Palm Sunday last weekend, many Salvationists attached palm branches to their homes or in the front yard. Some put signs on their fences reminding people the significance of that day and others put tubs of palm branches out and invited passersby to take one.

For the Easter weekend, some corps folk from Stafford Corps in Brisbane have made large crosses to put in their front yards or attached crosses to their fence as a witness and to remind people that Jesus is the reason for the season. 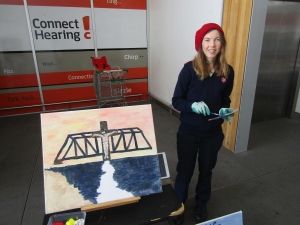 At Murray Bridge, about 80km south-east of Adelaide, unique art is drawing the community's attention to the Easter message.

Murray Bridge Corps Officer Captain Claire Watson is painting the Gospel story in an outdoor area near the entrance of a shopping mall in the city.

“There are a series of three paintings: ‘Broken’ depicting our broken and hurting world, ‘Restored’ depicting the cross and ‘New Life’ depicting resurrection life,” Claire said. “The paintings have a local flavour as they feature the main landmark here – the bridge over the Murray River. People passing in and out of the mall are invited to take (an) Easter reflection card and a Gideons Bible,” she said. Claire said two of the three pieces were painted at home while the third was painted at the shopping centre today: “It has the Cross bridging the gap and blood flowing into the river.”

“I am not an artist. I am just a Salvation Army officer looking for some way to share the Good News of Jesus with the community,” Claire said.

She said it had been a challenge to complete the artwork. “The main challenge I have faced so far is finding decent paint in a country town! Colours are limited,” she said.

The finished works are destined to hang in the window of the corps’ Thrift Shop from Good Friday. 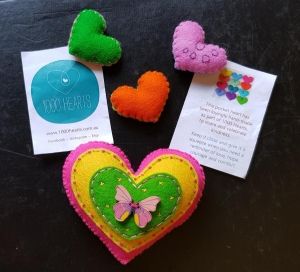 The hearts to go into the Army community care packs this Easter at St Marys Corps.

St Marys Corps on Tasmania’s East Coast is distributing small, handmade, felt hearts as a symbol of love and compassion. The idea is based on the model of 1000 Hearts, which is a secular community project based in Hobart.

Divisional envoy Melanie Norton said she first became aware of the tiny, hand-sewn hearts project in 2017 and had been regularly handing them out to people with whom she came in contact in the course of her chaplaincy work. “Hearts make a difference,” Melanie said.

She said she would be putting some of the hearts into the ‘We Care’ packs the Army had sent.

As with Christmas, she said Easter was a time when The Salvation Army could reach out to the many “tired, sad, unhappy, grieving, lonely, unwell, angry, embittered, frustrated and hurting people” in our neighbourhoods.

Townsville Riverway Recovery Mission Corps Officer Captain Helen Whittle, said corps folk in the Far North Queensland city were doing “a combined thing” where they were decorating their driveways or letterboxes in an Easter theme, including ‘He is risen’ messages and balloons.

As restrictions tighten, some corps have had to cancel planned ‘drive-through’ delivery of Easter packs – where members of the community and the corps drive onto the corps site to be handed packs through open car windows – because that now fell outside the guidelines of what government believes is acceptable social distancing.

At Carlton Corps in suburban Hobart, an Easter colouring-in competition has been included with ‘We Care’ packs being distributed there. The packs have included chocolates, toys and Easter novelties.

Carlton Corps Officer Lieutenant Craig Boyd said that there had been a good response from the community.

“So far, we have had some really positive engagement with families that we haven’t met before,” Craig said.