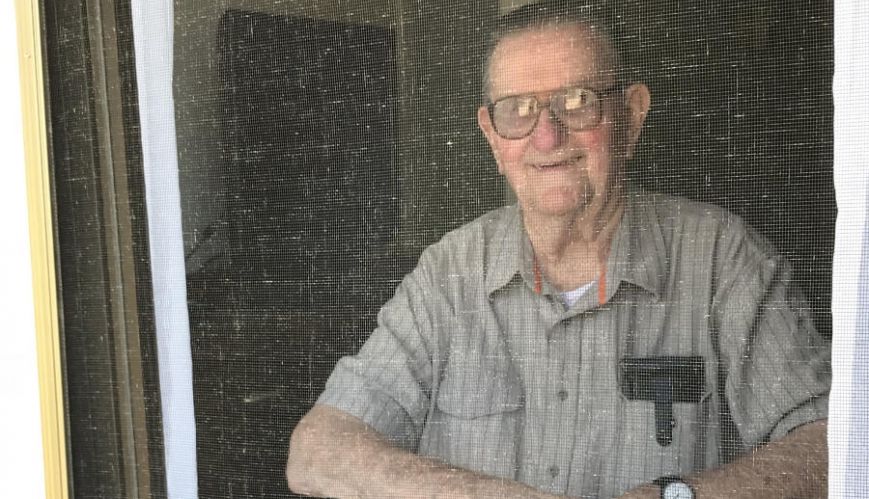 Bellara Retirement Village resident Peter Alkis enjoys the music through the screen from his unit window.

Look! Out in the courtyard! Is it the Karaoke Captain, the COVID-19 Crooner or the Virus Vocalist? No! It’s Captain Aaron Stobie, the Campbelltown Corps Officer in Adelaide, who has adopted all three nicknames!

Aaron loves to sing and has used his dulcet tones to bring toe-tapping enjoyment to a willing audience of senior citizens at Bellara Retirement Village, next door to the corps in the north-eastern suburbs of the city.

When COVID-19 restrictions came into force, Aaron said his heart went out to the residents, believing they would be feeling “feeling pretty down and out” with not being permitted visitors – especially family. So, he contacted the village management and floated the idea of a concert in the courtyard.

“I said: ‘Maybe I could come and do a bit of a concert – a bit of a singalong; a bit of entertainment hour or so – where people could watch from their rooms or open the curtains and blinds and windows or they can come and sit outside',” Aaron said. 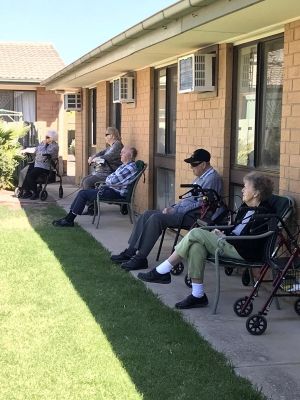 Some of the Bellara Retirement Village residents enjoying the courtyard concert.

“There was actually quite a good crowd, which was lovely for them and lovely for me – so, we sang a couple of tunes and they joined in,” Aaron said.

“It was quite amazing because there were people sitting in their rooms, standing by the window in their rooms participating, or some came outside and were sitting on chairs in the courtyard.

“Where we were is surrounded by the individual units and where the independent living people were sitting in their backyards. One couple brought out their afternoon tea. Another couple were dancing – doing some rock and roll and jive and that sort of thing.

“One of the couples who came out were celebrating their 70th wedding anniversary, which was remarkable. They couldn’t see their family so it was quite a lovely experience really.”

Most of the songs in Aaron’s repertoire are loaded onto his mobile, which he connects to a portable speaker system.

He said Campbelltown Corps had enjoyed a good relationship with the village over many years with residents taking part in many corps activities – both at the corps and inside the village.

That relationship is at its strongest when members of the congregation are residents there.

In fact, Aaron’s wife Captain Lauren Stobie is a good singer too – according to her number one fan!

The couple love to sing together and are regularly booked for singing spots – mostly in retirement centres – as part of their appointments. Neither is a trained singer (“I wish") but enjoy making music for the Lord. Only last year, Stobies were invited to New Zealand as the guest vocalists at the Hamilton Corps band weekend.

Lauren would usually join her husband on this sort of occasion at the retirement village, but they are expecting twins so have been trying to limit the contact she has with people so she is working mostly from home.

The concert ended with David Foster’s ‘The Prayer’– which the couple often sing as a duet.