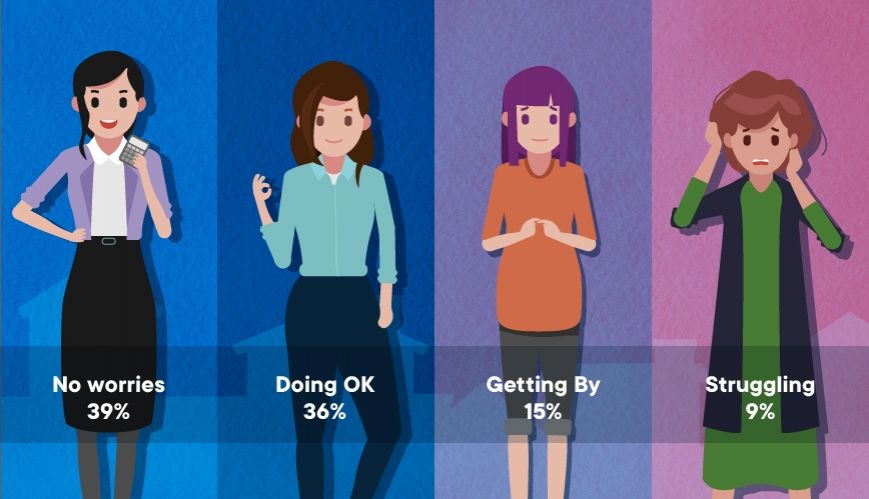 More than 700 women across The Salvation Army responded to the online Survey of Financial Inclusion and Access (SoFIA). Of those women, 39% fell into the ‘No worries’ category, 36% the ‘Doing OK’ category, 15% the ‘Getting by'’ category and 9% were ‘Struggling’.

The Salvation Army is set to introduce a number of measures to improve the financial wellbeing of its people.

The changes are a result of an online Survey of Financial Inclusion and Access (SoFIA) of female Salvation Army staff, officers and volunteers, which was conducted between November and December last year, with more than 700 women responding. SoFIA was ANZ’s Financial Wellbeing Survey, renamed for The Salvation Army. Since 2003, ANZ has conducted surveys exploring financial literacy, attitudes and behaviours to inform programs around financial inclusion in Australia.

Compared to data from the general population, the survey found that the majority of Salvation Army respondents were more likely to have savings and their levels of debt were slightly lower. “We want to thank all women who took part. We are pleased to see that Salvation Army women (based on the SoFIA survey results compared with ANZ’s data) have a higher financial wellbeing score,” said Penny Lovett, The Salvation Army Chief Human Resources Officer.

“While we cannot draw generalisations for all Salvation Army women based on the number of respondents, we are concerned about the number of women categorised as ‘struggling’ and will be working with the FIAP working group to implement several initiatives to support our Salvation Army community in 2020.”

The survey found that nearly 10 per cent of respondents reported ‘doing it tough’, with 86 per cent of this group admitting they:

Compared with other groups, those that were struggling were more marginalised, with single parents, people who had been ill in the past five years and people with an Aboriginal or Torres Strait Islander (ATSI) background represented highly.

Sue Hodges, The Salvation Army Indigenous Engagement Coordinator for NSW/ACT, said she was astounded that there were women working for or volunteering in The Salvation Army who were struggling so much. “It’s heartbreaking,” she admitted.

The fact that 10 per cent of this group identified with an ATSI background is also something she felt needed addressing. “We need to create opportunities where we can identify Aboriginal and Torres Strait Islander people in Salvation Army personnel and create environments that are culturally safe, staff are being retained and supported to close this gap.”

One person who took part in the survey was Jasmine, who works part-time for The Salvation Army. She felt it was important for her to contribute because she knows what it’s like to feel out of control with regards to finances. “I had been independent and working and then overnight everything changed [due to a relationship breakdown],” she said.

“It took a lot for me to drop my pride and say, ‘I need help.’ You always think there are others that are worse off than you. Sometimes that can be a bit of a deterrent, but if you don’t reach out for the help then things can’t get better quickly.”

Jasmine said at that hard time, her Moneycare financial counsellor and other Salvation Army personnel provided the lifeline she needed to get back on her feet. She felt that taking part in SoFIA was one way she could ‘give back’ and help The Salvation Army to better understand how women in the organisation were coping financially.

The Salvation Army has responded to the survey results by developing a range of approaches and targeted learning to improve the financial wellbeing of females within the organisation, which will be available to all Salvation Army workers, not just women. It is expanding its Salvos Central portal information to include more about superannuation, Employee Assistance Program (EAP) benefits, links to Moneycare and its financial capability resources.

It will also expand its ‘onboarding’ process for new employees to include financial capability resources and train managers to be aware of financial hardship.

Seema Sanghi, The Salvation Army Financial Inclusion Project Officer, said one outcome of the survey she is hoping will come about is an increase in conversations about financial wellbeing. “In The Salvation Army we are great at taking care of each other and asking, ‘How’s your family?’ and ‘How are you going?’ but we want it to be more natural for managers and co-workers to ask how people are going financially. We want to take the taboo out of talking about money.”

The FIAP working group is investigating the possibility of providing training to managers within The Salvation Army on how to look for signs of financial stress and so they know the right questions to ask to support staff members who are struggling financially.