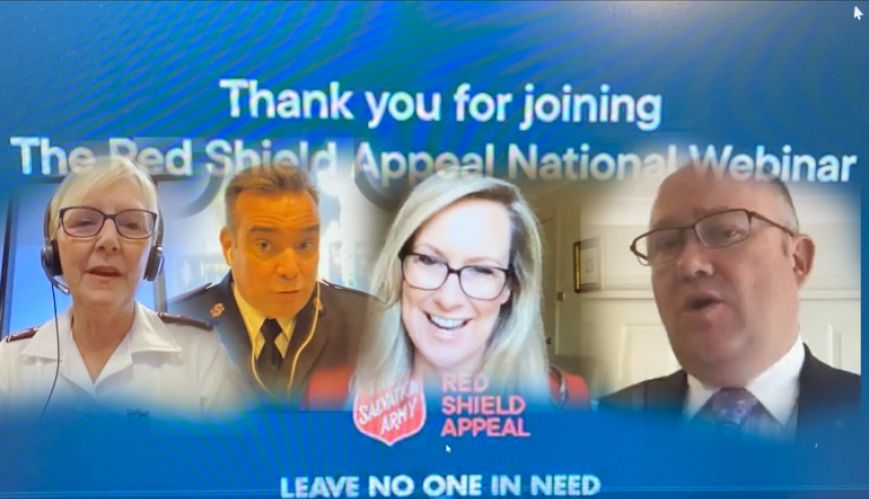 About 360 major supporters of The Salvation Army’s work across the country took part in a 50-minute webinar today and heard that there was a “tsunami of need” coming Australia’s way on the back of a “horror start” to 2020.

The webinar acted as the business launch of the Red Shield Appeal in place of the sit-down functions usually held in major cities and towns around Australia.

Major Brendan Nottle, from the Army’s Project 614 in Melbourne, told the webinar that the church was experiencing a “tripling in demand” for its services as the community struggled to face a number of crises.

In the wake of the ‘Black Summer’ bushfires, floods, drought and the COVID-19 pandemic, a “tsunami of need” was on its way, Brendan said, with crises ranging from unemployment and homelessness to addiction, tragedy and grief.

Brendan gave several examples of where The Salvation Army had supported and continued to support the nation’s most vulnerable through its established programs. He admitted that, during the COVID-19 pandemic, Salvationists and volunteers were at times required to “make it up as we go along”.

The webinar was an opportunity for major supporters to hear from The Salvation Army about its community work over the past 12 months.

Television presenter Melissa Doyle was the MC for the event, and during her introduction mentioned that it seemed like “an eternity ago” that “2020 got off to such a horror start”.

The keynote speaker was Shane Fitzsimmons, recently appointed NSW Commissioner of Resilience. Shane played a pivotal role in the recent Australian bushfire season in his position as Commissioner of the NSW Rural Fire Service.

Melissa described Shane as one of the familiar faces the country came to respect over the critical first few months of 2020, saying that he had been praised for his high level of empathy, his composure in a crisis and his calming voice as he led Australia through one of its worst bushfire seasons.

Shane spoke about how to achieve resilience in leadership during a crisis and how to plan for unexpected times and of the positive impact and importance not-for-profit organisations, such as The Salvation Army, had in crisis and disaster relief efforts.

“What we need to keep in mind is those bushfires came on the back of extraordinary drought situations; storms and floods in some areas and now we have the widespread implications of the COVID-19 pandemic, which is affecting us all,” he said.

Having described the firefighting effort and the damage and destruction the fires caused as unprecedented so, too, he said the journey ahead of large-scale rebuilding and recovery would be unprecedented.

Shane also gave a personal perspective on what he had learnt from the bushfires and COVID-19 pandemic, saying how The Salvation Army had been “pivotal” in assisting his own family to get through different and traumatic times and resolve relationship issues over many years.

Colonel Winsome Merrett, Australia Territory Chief Secretary, said that, for more than 50 years, The Salvation Army had enjoyed the trust and generous support from Australians from all parts of the country and all walks of life to underpin its work in 250 local centres and communities.

She said this year, “more than ever”, The Salvation Army reaffirmed its commitment to serving Australians so as to “leave no one in need”.

“Despite the significant challenges, we are not giving up and we remain committed to meeting the needs both of existing and emerging of those most vulnerable in our communities,” she said.

To end the webinar, registrants could SMS questions, which Melissa passed on to the speakers to answer during a Q&A session.

Lisa O’Sullivan, The Salvation Army fundraising events manager, said the webinar had been quickly organised when it became apparent COVID-19 restrictions would still be in place around the time business functions were usually held.

Lisa said each webinar speaker was in their home city and, using online video technology, dialled in and could be seen by the widespread audience.

She said Shane and Melissa were in Sydney and Winsome and Brendan in Melbourne.

Traditionally, those attending functions would be invited during the event to pledge their financial support to the appeal then but, during the webinar, text messages were being sent to each attendee asking them to register their donation. Lisa said those pledges would be subsequently followed up.