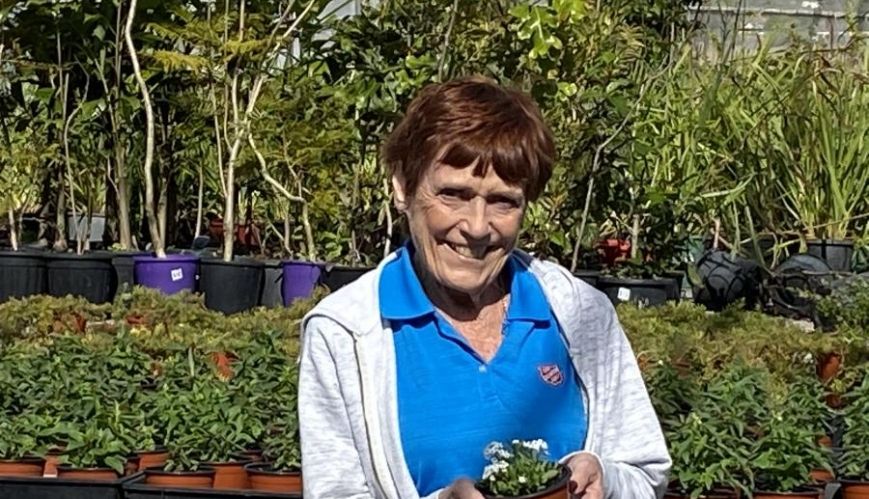 Watch Them Grow manager Larraine Doglione is at home among the thousands of plants at the nursery.

With people confined to their homes at the height of the government restrictions in place to limit the spread of the deadly COVID-19 virus, many are discovering their green thumbs.

To prove the point, a popular national television home and gardening show recently revealed that since COVID-19 reared its ugly head, Australians had bought more than 8.5 million punnets of seedlings – mostly vegetables. Many nursery shelves have been as empty as those in the toilet paper, hand sanitiser, rice, pasta and mince aisles in supermarkets across the country.

The unprecedented rush on plants has been a good thing for The Salvation Army’s Watch Them Grow (WTG) nursery at Riverview, west of Brisbane.

WTG, which put down its roots in 2009 inside The Salvation Army Riverview Farm in Ipswich, Queensland, is a social enterprise wholesale nursery and market garden. It is a ministry of the Bundamba Corps.

Nursery manager Larraine Doglione, a horticulturist with more than 40 years of experience in gardening, said there had been a huge growth in customer numbers since lockdowns and social-distancing strategies were introduced in March. “COVID-19 has had an effect on the nursery industry in general as people have spent more time in the garden,” she said. “Business has skyrocketed here. We are very happy.” The nursery has thousands of potted plants.

Larraine said Bundamba Corps had to shut its Family Store (when COVID hit) where WTG had its retail outlet, so customers were invited to shop at the nursery instead, which was usually reserved for bulk orders and businesses such as landscapers.

“Unusual times call for unusual methods,” Larraine said. The nursery is located inside the 150ha Riverview Farm property “so there’s plenty of room to do social distancing”.

The property where the nursery is located, with its heritage-listed buildings, was “absolutely gorgeous”, Larraine said. Their nursery has literally thousands of potted plants, flowers, succulents and fruit trees for sale.

Larraine said the nursery had branched out into social media with many of her plant and flower photographs posted on Facebook. This had helped draw customers from much further afield than the Bundamba/Riverview area. Other community groups had added links to the nursery page, which boosted interest which translated into more foot traffic.

Larraine has been the manager at the nursery for 12 months after having worked there as a volunteer for more than five years.

She said the nursery had provided a place of work and respite for people from all walks of life. It was run largely by an army of community and corps volunteers, government work scheme participants and staff. Money raised from the nursery goes to support needy people in the Bundamba community and surrounding areas.

Larraine said the many varieties of plants, most of which were grown and propagated onsite, were sold at “very competitive prices”. Other garden needs, such as sugar cane mulch and potting mixes, were bought from outside sources.

She said customers were often impressed with the quality of the plants grown at the nursery and that, coupled with expert advice and assistance, “they are very impressed”.

Another volunteer at the nursery, Chris Wilkins, is also a horticulturist and, “between the two of us, we have 80 years of experience (working with plants),” Larraine said. 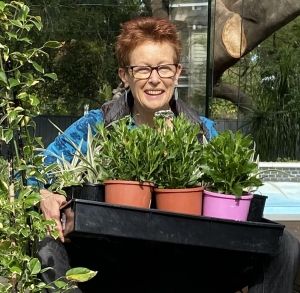 Helen, from Fairfield in suburban Brisbane, and the “loads” of plants she and friend Amanda bought at Watch Them Grow nursery.

“We’ve had very little staff (because of COVID-19 restrictions) but we still manage to keep the place looking good and plenty of stock,” Larraine said.

Helen and Amanda, two happy customers at one of WTG’s recent special plant sales, said they had “a great plant shopping experience” praising Chris for his knowledge and advice.

Helen said they’d shopped there once previously but had only heard about the recent sale “by lucky chance ... a passer-by on our street who was a volunteer at WTG, told me about it as I was watering the front garden.”

She said the two, who had travelled from about 30km from their home in the south-western Brisbane suburb of Fairfield, subsequently bought “loads of stuff” including African daisies, lomandra and desert roses.