Bikes and lives turned around in recycling venture Bikes and lives turned around in recycling venture

By Darryl Whitecross and Simone Worthing

It has been said before: The Salvation Army is an organisation of second chances – the addicted on the road to recovery, the prodigals restored to faith and bric-a-brac given a new lease on life.

Bicycles have now become part of that with the wheels of a new program having been set in motion officially in Brisbane, where bikes are being given a second chance at life on the road.

Just like any life, program coordinator Andy Steele says every machine that passes through the new centre has something worth saving – whether it’s a reflector or a bell. So it is with former aircraft engineer Wes Thompson, 57, and Damien ‘Damo’ Saal, 45.

Wes is finding recycling bikes is helping him in his rehabilitation after having spent several years in jail. He is the principal mechanic at the bike recycling centre and is aiming to be reconciled with his family soon in the twin towns of Albury and Wodonga, which straddle the Murray River on the Victoria/New South Wales border. He’s working through a couple of issues – not the least being the COVID-19 pandemic travel restrictions – but has his eyes firmly set on moving to be closer to his children to reaffirm his position as a father and, in turn, step up to being a hands-on grandfather.

After being released from prison in 2017, Wes said The Salvation Army Streetlevel mission in Brisbane came into his life through a friend who suggested he look up Andy Steele, which he did. But he soon found himself behind bars again.

“While incarcerated the second time, Andy (who does prison ministry) told me about the bike program and said I was welcome to come and have a look when I got out,” Wes said.

At that stage, the Streetlevel bike recycling program was just beginning. It was, as Wes put it, “Just a couple of containers on a slab of concrete. While in jail, I had acquired a welding certificate. I also have a lot of knowledge in the engineering trade and made some suggestions to Andy about putting some windows and doors in the containers for when the bike shop opened,” Wes said.

“We started to manufacture parts to put in the doors, workbenches, air compressors, window frames. We cut sections out of the container, welded window and door frames, put in windows and doors, benches to work on and put air-con in the containers to make it comfortable. My life was changing to the extreme.”

Damien’s path to the bike recycling centre also was from the ‘other side of the tracks’.

He said he had “some court issues” and had completed the rehabilitation program at The Salvation Army Moonyah drug and alcohol rehabilitation centre at Red Hill, Brisbane. He had met Paul Brittenden through God’s Sports Arena – the ministry that runs out of the Brisbane City Temple each Sunday night, which reaches out to the homeless and people on struggle street. Paul is involved in the recycled bikes program too.

“I talked to Paul about what I wanted to do (and) bikes had come up in conversation,” Damien said. He said Paul told Andy I was a “bloke who likes to ride and fix bikes” and the partnership “rolled on from there”.

“It gives me a sense of purpose; some direction. It’s a passion. I would like to get more involved and hopefully turn it into some sort of employment,” Damien said. “I like giving back to The Salvation Army. It has done a lot for me ... they have saved my life. I was heavily involved in drugs (so) without these guys, who knows where I would be.”

Wes said he was “hoping to take this whole venture down to Victoria”. “I have documented everything in pictures and writing. At my age, I’m finding it hard to get employment. This is ideal for me. It gets me out of the house, gives me responsibility and I can speak to the public. I have suffered from mental health issues so this helps me cope; takes my mind away from things.

“This is the first time I’ve seen this happen and I strongly believe this is a good thing for the workers and the community. The life I used to live before I did this was completely different. I’ve got the taste of this new way. I can’t go backwards.” 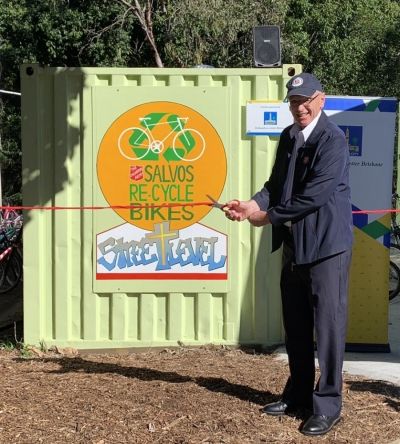 After a slow and considered beginning, the bike-recycling program was officially opened by Queensland Divisional Commander Lieutenant-Colonel David Godkin.

Andy said that, with the help of some Brisbane City Council and Salvation Army grants, the centre was fully operational.

The containers have been painted and signs put up and, as Wes said, air-conditioned and fitted out with shelving, tools, equipment, parts and the two all-important maintenance poles.

Andy said the centre was struggling to keep up with demand – “a nice problem to have”. He said that, as fast as the team could recondition a bike and get it into the shop, they would sell.

The centre is set up in the grounds of the Salvos Stores centre at Red Hill in Brisbane’s inner northside and is part of the Moonyah rehabilitation complex.

Andy said that if it wasn’t for Salvos Stores area manager Stuart Estreich and the help Salvos Stores had given him and his team, “we couldn’t do what we’re doing”. “The partnership with Salvos Stores is important. It’s just amazing how much help they’ve been in getting us up and running and giving us space in their stores,” he said.

He said the centre was receiving second-hand bikes from a number of different sources including donations from a 99Bikes store and from the public and was in negotiation with the Brisbane City Council to take any lost bikes that were not claimed after a designated period of time.

He said there were plans to approach Queensland Rail to engage in a similar arrangement.

Any profits from the sale of the bikes benefit the Streetlevel ministry at the moment, but Andy is looking at the bigger picture: “I hope, eventually, to make enough money to pay a wage and some small profits go back into the business,” he said.