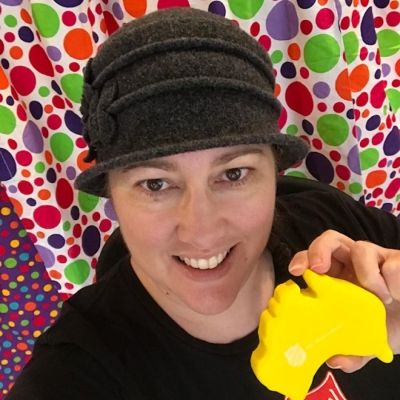 Captain Joanne Smith with the ‘squishy foam map’ of Australia that junior soldiers will be receiving in their Renewal Day pack.

When The Salvation Army children’s mission department met last year to decide on the theme for the 2020 Junior Soldiers program – The Great Adventure – they had no idea of the chaotic year that lay ahead.

The COVID-19 pandemic has taken the world on an adventure like no other, and the Junior Soldiers program is no exception. The kicker to the theme is Staying on Track – something everyone is trying to do in such uncertain times.

Captain Joanne Smith, Children’s Secretary on the Mission Support Team, said that, while the strictest social-distancing measures had been reintroduced in Victoria and remained in place in varying degrees elsewhere across the country, how renewal Sunday would look this year was still unknown.

Joanne said this Sunday, 9 August, was the date settled on for Renewal Sunday 2020, but corps leaders were free to decide on whether that date suited them or whether they would postpone the day to later in the year or into early next year.

A Renewal Sunday pack has been developed, based on the theme. Joanne said all junior soldiers would be asked to consider the answers to questions such as ‘How do we know which path to take?’, ‘What might cause us to lose our way?’ and ‘How can we get back on track?’.

The Scripture passage for the day is from 1 Corinthians 1:8-9: “He will also keep you firm to the end so that you will be blameless on the day of our Lord Jesus Christ. God is faithful, who has called you into fellowship with his Son, Jesus Christ our Lord.”

Along with the Junior Soldiers renewal card, each child will receive a ‘squishy foam map’ of Australia as another reminder of the day. Joanne said that during the COVID-19 restrictions, many junior soldiers across the country had been ‘staying on track’ by completing their passport activities at home. 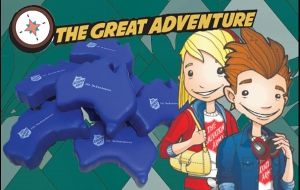 Junior Soldiers around Australia have been taken on a great adventure of a different kind as they try to stay on track during the uncertain times around the COVID-19 pandemic. Darryl Whitecross’s artwork features the squeezable map of Australia each child is to receive on Junior Soldier Renewal Sunday this year.

State of the nation

While many corps around the country have an active Junior Soldier program, some don’t because of the demographic of the corps while others incorporate a similar program targeted at discipling children.

In Darwin, Corps Officer Major Kim Hawke said a number of children would soon be enrolled as junior soldiers. Some of those prospective junior soldiers made cards to bring cheer to elderly members of the corps isolated during COVID-19 restrictions and made craft ‘hugs’ that were included in ‘worship at home’ packs, writing prayers for a corps prayer video and taking part in a corps prayer walk in the community. “While the Northern Territory was experiencing restrictions on gathering, the children connected through a ‘Virtual Funtime’ with the corps officers and their leaders, Hannah and Michellie,” Kim said.

Lieutenant Matt Gluyas, Corps Officer at Ingle Farm in Adelaide, said while not following the Junior Soldiers program closely, the corps had a “massive” discipling program, reaching junior soldier-aged children and families through schools and online. It is called JRev and is coordinated by Sarah Green. Matt said while COVID-19 restrictions were in place, JRev was keeping the children connected through a 30-minute Facebook video show. “We do have a few junior soldiers; however, our JRev is a community of children, parents and their leaders who are journeying alongside each other to become more like Jesus and to serve our community,” he said. 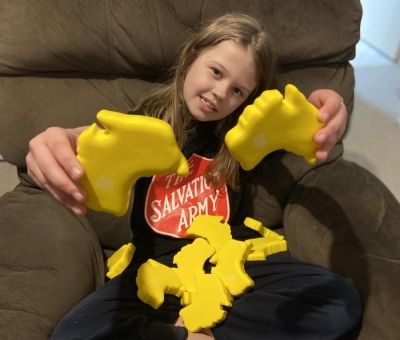 Jenna Fisk, from Ballarat Corps in Central Victoria, said the corps had been working hard to stay connected with its junior soldiers during the pandemic isolation period. “One way that we’ve done this is to involve them in aspects of our online worship,” Jenna said. “They have been part of a Kids’ Church memory verse dance: The kids and Kids’ Church leaders all recorded a dance that was compiled into a video to be part of the service. Another thing they have done is Scripture reading ... compiled into one video for a church service. These activities have played a part in involving them in our church worship and they have also helped them feel connected, as they enjoyed seeing each other on video knowing they were part of something together. It has also enabled them to continue working towards their Junior Soldier awards, as they will earn stickers for participation.” Seven junior soldiers renew their pledge via Zoom.

In Hobart, Corps Officer Captain Nicole Snead coordinates a well-established Junior Soldier program. She said the COVID-19 pandemic restrictions had made running the program “a bit haphazard” this year. Nicole said the program, which is run on a Friday night in conjunction with other young people’s activities, was not only a discipleship program for the children but was a link through activities such as music and camps to the wider workings of The Salvation Army for children from the community. “We love it. We love the kids and we think it’s vital in their development as Christ-followers,” she said. The corps plans to incorporate Renewal Sunday and enrolments into its ‘Kids Celebration Weekend’ later in the year. The wider corps has only just restarted corporate worship, but the Young People’s programs are still suspended. The corps also has used that time to look at “rejigging” its children and youth ministries.

Reno Elms, from Unley Corps in Adelaide, said he began working with the Junior Soldiers program about 40 years ago, but still gets immense joy “seeking to birth the mission of the Salvos in younger hearts and minds”. “It seems to be getting harder working with kids as I get on in years a bit,” he admitted, but said, in the COVID-19 pandemic space, the Zoom video chat platform was “a new dimension of operation” and would incorporate Renewal Sunday in that space.

The Junior Soldiers and Corps Cadets programs are back meeting together at Dubbo.

At Dubbo Corps in NSW Central West, the 14-strong Junior Soldier and Corps Cadet groups have just resumed meeting together after COVID-19 social-distancing regulations eased to allow them corporate gatherings. They meet on Monday afternoons. Corps Officer Captain Lara Sutcliffe said Renewal Sunday there “will be a long time away yet”. “Our kids are active in the corps (with) acts of service, ministry as Sunday school helpers and (with) music and reading during services. We are big on generational ministries and these kids are leading the way, checking in on the older folk of the corps. Three junior soldiers are to be enrolled and one is to be presented a crest award.

At Stafford Corps in Brisbane’s northern suburbs, Junior Soldiers sergeant Tracey Norley said it was “so encouraging” to be the leader of her group as they were “so caring, enjoy coming each week, love doing their project work for each of the award levels and are keen to memorise verses of Scripture”. Tracey said Stafford was one corps that had rescheduled Renewal Sunday – to 16 August. “This will be our monthly family service where the whole corps is involved. We will have a competition for all ages and disabilities.

At Parafield Gardens Corps in Adelaide, Leeanne Kingsman (Children, Youth and Families Ministry Assistant) said that Liz Hale ran the Junior Soldier program and was “doing an incredible job with our awesome kids”. They had received their Renewal Sunday packs and were using them.

At Perth Fortress Corps in Western Australia, Junior Soldiers coordinator Leanne Smith said two children would be enrolled this weekend and about 15 junior soldiers would be renewing their pledges. Their corporate intergenerational worship service on Renewal Sunday would begin with an item using the song ‘Raise a Hallelujah’ and involve children of all ages (including children from the Perth Chinese Corps).