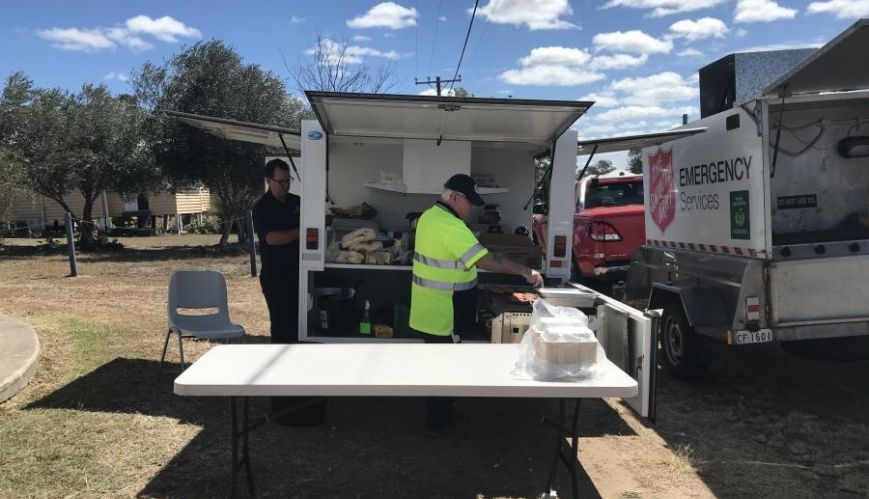 A team from Gladstone Corps in Central Queensland has hitched the wagons and taken its Mobile Recovery Service roadshow to the tiny township of Builyan.

The occasion was the Builyan Bushfire and Drought Services Day, the second time the corps and a group of social services had driven the 70km to the town nestled in the Boyne Valley as part of the Army’s support to drought victims in the southern area of Gladstone Regional Council.

Gladstone Corps Officer Captain Chris Ford said this year’s event was coordinated by the Army and the Department of Communities, whereas the first visit was part of the Mayor’s Drought Relief scheme.

“We are responding this time due to the needs that were seen in the area last time,” Chris said. “We know how hard it’s been for them and we know how difficult it can be to access services. That’s why we’ve brought these services to their doorstep.”

Teams from Moneycare, The Salvation Army Emergency Services and the corps Family Store were also part of the outreach. Along with workwear, Santos and Rio Tinto’s Queensland Alumina donated more than 200 pairs of boots.

Builyan has a population of about 350, and there are no more than 10 streets in the main township. It is one of four towns in the valley along with Nagoorin, Ubobo and Many Peaks. Builyan is the Aboriginal word meaning stone curlew, which is a ground-dwelling bird. Moneycare’s Sonya Wawrzyniak helps a customer with some boots as part of the Builyan Bushfire and Drought Services Day.

Chris said his team were on the road by 5.30am for the one-day event and were back in Gladstone by late afternoon for a debriefing. The Army team worked alongside local officials and service providers in the ‘one-stop-shop’ for residents.

Chris said Gladstone Mayor Matt Burnett spoke on the day and was accompanied by Cr Desley O’Grady. Other groups that were part of the day included the Strategic Disaster and Emergency Services, Lifeline, the Departments of Communities, Agriculture and Health, Red Cross, Ergon Energy and Gladstone Regional Council, as well as independent rural financial counsellors. More than 100 people made up the entire team.

“We have now given out, in total, $36,000 in drought assistance, $6500 of which was from North Brisbane Corps,” Chris said. “The whole event was very warmly received by the community and they are very thankful to the Army for supporting them.”

One drought-affected cattle grazier, Vic Roberts, thanked the Army for its “thoughtfulness, compassion and genuine caring”.

Vic said the assistance he and his wife Beth had received had made “a huge difference to our budget”. “The creek has stopped flowing and we only have a couple of small waterholes left now,” Vic said. The couple is waiting for a drilling rig to help them find another water source for their property.