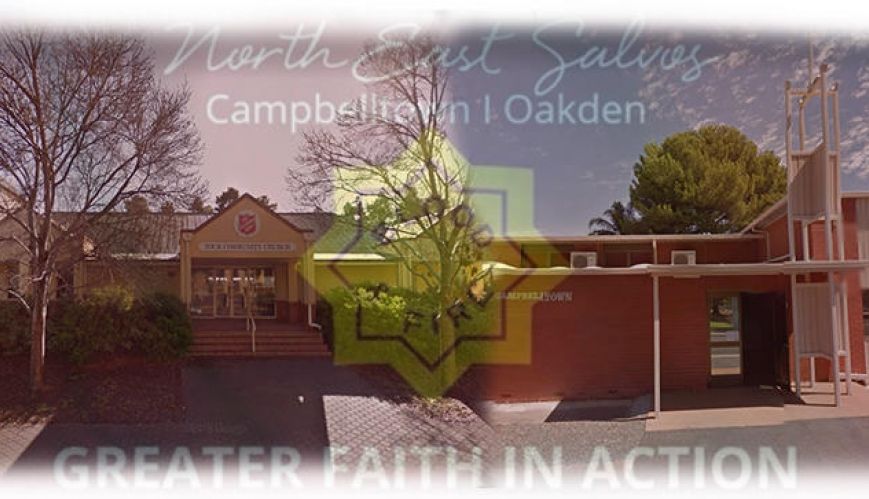 The Salvation Army is reimagining some of its ministry opportunities in the City of Churches.

In recent weeks, the congregations of the Oakden and Campbelltown corps in north-east Adelaide have been holding joint worship services in the Paradise Primary School hall as part of a merger process but continue to run their weekly programs from the individual campuses.

Major Dean Clarke, Central and Southern Area Officer for the SA/NT Division, said when COVID-19 lockdowns were implemented earlier this year the two corps began sharing online Sunday services. However, when it became possible to return to face-to-face worship, it was decided that they would see how that partnership evolved in a physical sense and leave the weekly itinerary unchanged for the time being.

“This coming together has reimagined the ministry in the areas as North East Salvos,” Dean said.

Captain Aaron Stobie, Campbelltown Corps Officer, said in praying through the possibilities and discussion with the area officers and corps leadership, there was “a strong sense that God is calling the two corps to be working together for greater community impact leading to greater Kingdom growth”.

In another display of togetherness, the young people from Parafield Gardens Corps are joining with young people from North East Salvos for combined youth group gatherings, which included a recent campfire night at Mt Crawford.

Aaron said the “coming together for youth ministry” had been happening between Parafield Gardens and Oakden for some time, but the campfire night was the first time all three had met together.

The corps’ men’s fellowships had their first combined outing to a Classic Jets Fighter Museum where they saw the restoration that is being undertaken of a Chance Vought F4U-1 Corsair 02270. The two corps Connect groups have begun to hold joint get-togethers.

Aaron said there was “such a buzz in the air” as the two congregations began meeting together. “We are feeling a great sense of anticipation as we step out in faith and into the new thing that God is doing,” Aaron said. “We are committed to being The Salvation Army in our communities,” he said.

Major Quentin Castle, from Oakden Corps, said the merger experience had been “really refreshing” for his ministry as an officer and for the congregation at Oakden. He said the two corps’ congregations had “meshed in” well with many enjoying being part of the larger congregation; for example, the lone timbrellist from Oakden Corps was now enjoying playing alongside the 10 timbrellists from Campbelltown Corps.

Quentin also was able to bring out his tenor horn again and, with his children, are back playing in a band, as there was no brass band at Oakden. His children have invited their friends to church to play, too.

The decision on a permanent home for the merged corps is still in its early stages. Meantime, Aaron and Quentin recently handed out the first instruments in a new Just Brass program run at Paradise Primary School. The program brings together the students from the school and young people from the corps under leader Colin Sweeney. Aaron said by the end of the first lesson all the students were able to make a sound or blow a note.

He said the corps was approached by school principal Karyn Alford to use the school facilities for the program. Karyn said she had come from another school where a Just Brass program had been running and was so impressed by the “positive impact” it had on the school community there that she wanted the program run at her new school.

Along with Just Brass, Karyn made it compulsory for all students at the school to be involved in either the junior or senior choir. She asked Aaron and Quentin to form these choirs and they jumped at the opportunity.

“What a huge privilege to connect with every student at Paradise Primary School each week,” Aaron said. “The school is so keen to have us on board.” He said the junior choir was learning the song ‘I Will Get Back Up Again’ from the children’s movie Trolls and the seniors were learning ‘This is Me’ from the movie The Greatest Showman.

It is hoped the choirs would have the pieces performance-ready so that they can be presented at the end-of-term assembly. Then, Aaron said, rehearsals would begin for Christmas performances.

Each year, the Army has run an outdoor Christmas Carols Carnival in the Paradise school grounds on the Friday before Christmas. This year, Aaron said he hoped the school choirs would be able to perform at that event.

“We would greatly value your prayers as we navigate through this space. We know that God has gone before us and he is commanding us to be strong and courageous as we respond to him,” Aaron said.