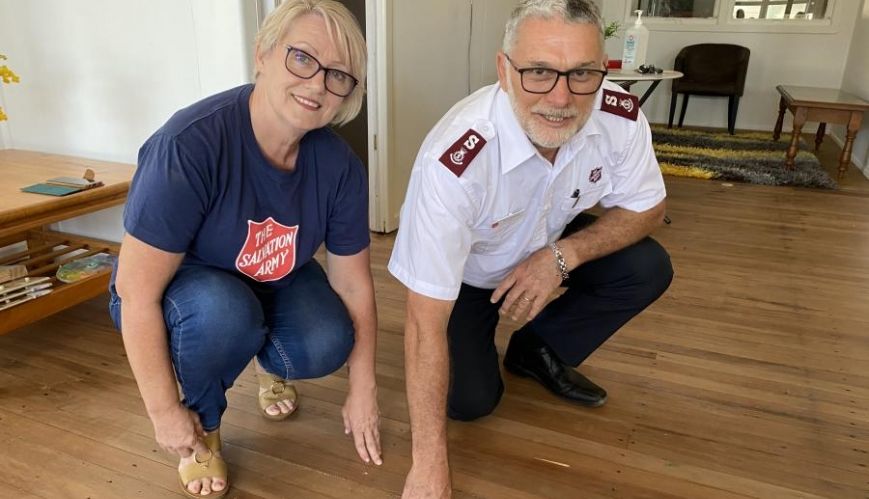 From the experiences of COVID-19’s social distancing, social isolation and other regulations, The Salvation Army is being called on to embrace what is being termed “the new norm”.

What that looks like differs from corps to corps and ministry to ministry. At Caboolture Corps, about a 45-minute drive up the Bruce Highway from Brisbane, Area Officer Major Neil Clanfield said COVID-19 had brought about “a radical new way of doing church”.

Neil said Corps Officers Majors Helen and Bruce Ellicott, the congregation and the staff of its family store have embraced the new vision and “turned on its head how church is done”.

The corps held a small ceremony on 9 October to officially start this new faith journey. Helen said it all began because of the COVID-19 restrictions. She said the church was empty day after day because the corps had been unable to worship corporately. The citadel was too small to hold worship services and comply with social-distancing requirements.

As with many other corps across Australia, Caboolture tried ‘church in a bag’ in the early days of restrictions in an effort to keep corps folk connected, but that was not a long-term solution.

“We could only seat 35 people in our building so, if you link that to delivering 100 bags to family homes, there were a lot of people that weren’t getting to church. So, we began to pray about what we could do,” Helen said.

That was when Helen said she had the vision to move the family store into the empty citadel in Grout Street and move corps church programs and community outreaches back to the original site in Lower King Street – where several other Army welfare programs such as Doorways and Moneycare operate.

In a bold move, the corps decided to move the family store from the hot, tin, toilet-less house and shed into the air-conditioned church hall – with bathroom facilities.

Neil congratulated the corps for having embraced the change and having seen “the bigger vision”. 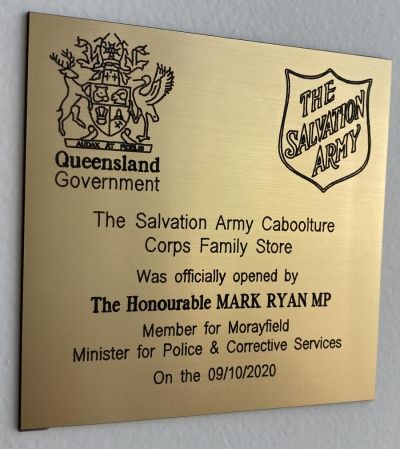 A plaque commemorating the new faith journey at Caboolture Corps.

Helen said God had said to her that “the way forward is to look back: Look back at the Early Church and how they did church”. She said the Early Church met in homes and broke bread together. “They cared for each other and took care of each others’ needs; they studied the Scriptures and prayed together and God answered their prayers.”

With the Early Church as an example, the congregation meets in homes in smaller groups and runs group-specific ministries for all ages out of the old family store site: It has a men’s shed attached, complete with ‘big boys toys’, a couple of pinball machines, a couple of billiard/snooker tables and a series of big-screen computer stations.

Ironically, where the family store had been operating is a house that is about 90 years old. It is being transformed into a new centre for community ministry called Hope House. The plan is to serve breakfasts on Sunday mornings for people experiencing homelessness.

Member for Morayfield, Mark Ryan, who officially opened the ‘new’ operation, described as “a game-changer” the decision to move the family store into the citadel. Mark said he was proud of the way the corps had freed up capacity in both locations to continue the “type of good work” for which The Salvation Army was traditionally known.

He said Caboolture was “better off” because of the compassion, generosity and charity the Army did in its continued service in the community. Although the family store was a place where people went to shop, Mark said it was also “a place where good conversations occur; where we link, where we connect; where we help”.

After the ribbon was cut to officially open the building, a cake to commemorate the occasion was cut and shoppers took to the aisles in a brisk morning of trade.

Helen said the transformation of Hope House was close to completion. She said one of the “discoveries” the corps had made during the changes was the “beautiful floorboards” under the old floor coverings. After having spent hours punching in the nails and sanding the boards, the floors have become a feature of the space.

Jean Fox, who is an active ministry team member at Caboolture, said the house would continue to turn lives around as it had done hers about 30 years ago.

“I owe my life now to this old building and The Salvation Army who showed me such compassion in one of my worst days,” Jean said. “It has done exactly the same for many folks over the years, as well as being a part of our family store.”

It took about four weeks from when Helen first discussed her vision with Bruce to the cutting of the ribbon to open the repurposed citadel. In that time, an army of corps folk, volunteers, family store staff and professional tradesmen switched the focus of the two properties and gave them a “new norm” lease on life.

Jean said it was a dream, vision and transformation that “comes along in a church rarely”.