The Salvation Army Guards And Legion Association – more fondly referred to as SAGALA – is a program that still has its relevance in a modern world.

Rebecca Lithgow, from Townsville, has become Australia’s newest General’s Guard – the 179th young woman to have achieved that award in Australia since 2002, and 920th in the world*.

Rebecca said the award-based SAGALA program, for young people aged 5-16, was a good ministry for churches as it had broad appeal and covered a wide range of life skills that young people might not otherwise get – “and learn about Jesus as well”.

“We have Sunday school, which is for the young kids, and you have Junior Soldiers, which is more faith-oriented and more for us [people within The Salvation Army] but SAGALA is more broad. It’s not just for young kids of the church. It extends beyond the church. It is for all kids of all ages. 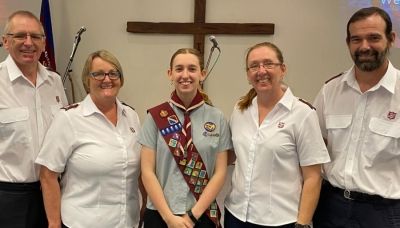 “I find that is really good because it’s a really good way of reaching out to the community and ministering and simultaneously helping kids learn things that they probably wouldn’t learn otherwise and be able to learn about Jesus as well.

“I learnt to change a tyre and I would never have been able to figure that out by myself so there’s really handy and cool practical stuff like that.”

The SAGALA journey started out slowly for Rebecca. She began attending in 2014 at the age of 11 when her parents were at Officer Training College in Sydney.

“I joined because a whole bunch of other girls had been going to the local SAGALA at one of the local Salvation Army churches. They took a bus every week and they said if any of the girls at the college wanted to come they were welcome, so I went along. I had a lot of friends going so that kind of motivated me.”

On commissioning, Rebecca’s parents were appointed to Townsville Faithworks Corps and she has continued her SAGALA involvement.

Bronwyn said she and Perry were “big fans” of SAGALA. “We’ve come to see how valuable it is,” Bronwyn said. “What SAGALA does is teach very practical life skills in a fun, Christian context, eliminating the secular/sacred divide.

“It’s been amazing to see how our SAGALA leaders come alongside the kids in what is really a positive, mentoring-type relationship – much-needed in our community. Becca has learnt about everything from pitching a tent to looking at relationships and dating from a Biblical perspective and much more in between.”

Bronwyn paid tribute to the corps’ “faithful SAGALA leaders”, Allan and Heather Collins, who have been leading the program for many years and have “taught, mentored and pastored thousands of children and their families”.

Rebecca said that she spent about 12 months as a Sunbeam in Sydney before becoming a Guard and had achieved about 10 badges in that time before the move to Townsville where her SAGALA involvement gained momentum.

To qualify for the top award a Guard needs to accumulate five stars. To get a star, Rebecca says a Guard needs to pass seven badges, “so that’s probably around 35 badges minimum in seven different genres”, which focus on life skills and being a Christian.

“My favourite badge was the gourmet chef one,” she said. “We had to make a three-course meal for our family, so my friend and I worked together and made this massive three-course meal for both of our families. It was heaps of fun. The entree was homemade sushi; the main was pumpkin soup and the dessert was a chocolate fountain with strawberries and bananas and marshmallows.”

She said she had not heard of the General’s Guard award before moving to Townsville and credited her SAGALA leaders and the encouragement of “adult mentors” at the corps for achieving the milestone.

“They encouraged me to continue because, obviously, as I got older school started becoming more of a priority. I had a job at one point that overlapped but I think it was the constant encouragement that was helpful. To be honest, for a long time, I didn’t even know it existed. “When I found out, I said: ‘Yep. I was going to get it’ because I’m very goal-oriented so that was like something to aim for.”

Rebecca said the SAGALA program had helped her faith journey, too. “It helped me to be able to interact with the kids and gave me an opportunity to kind of explain my faith to them. It gave me an opportunity to practise how to talk about my faith to other people, to do that with some of the younger kids and be a mentor to them. It inspired me to be able to make sure that my faith was strong and so that I can inspire others to follow along.”

Guard leader Heather Collins said Rebecca had shown great commitment to the program. She said Rebecca took on a leadership role within the group by organising games and leading parades and was a great encouragement to others.

Rebecca said she didn’t receive a phone call from the General when she received the award but did need to sit before a three-person interview panel as the final step to achieving the award and answer several questions about how the program had helped her broadly in life, her faith journey and her plans after having completed the program.

Rebecca plans to move to Brisbane next year to begin a double degree in mechanical engineering and architectural design. She said she hoped the general life skills and leadership skills learnt through SAGALA would keep her in good stead as she began that new phase in her life.

Rebecca said her little brother, Zac, who is a Legionnaire in Townsville, was following in her footsteps. She said he was not as competitive as she but hopes he will show a similar determined and finish the program.

* Figures obtained by Others from International Headquarters. IHQ said that the Army began combining Guard and Scout (Legion) rolls in 2002 – the first person on the new list was from Australia – and since then, and until Rebecca's achievement, 178 General’s Guard awards had been presented in Australia and 919 globally. Others was unable to uncover numbers from when the award was first introduced.