Worship Arts coordinator Shushannah Anderson says playing the role of Mary, as the teenage mother of Jesus in a new Advent video series for Salvation Army corps, was a powerful experience. 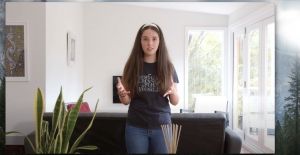 In the first ‘The Incredible Christmas’ film, Mary (played by Shushannah Anderson) makes a video diary after the visit of the angels.

The Salvation Army Mission Resources Department partnered with the Worship Arts team to create ‘The Incredible Christmas’, a three-part resource series for corps use throughout December. (Downloaded HERE.)

The modern-day adaptation features Mary creating an online video diary and making Zoom calls to Elizabeth, played by Alison Chambers. Shushannah says several young adults were interviewed in the creation of the films, in order to gain a modern-day perspective of the Christmas miracle.

“We interviewed a couple of young women between the ages of 12 and 20 from around Australia, to see what they think Mary might have said, how she may have reacted or what she might have done in a modern world,” she said. “That really informed how we wrote the script.”

A key focus of the series is the humanness of Mary, with the script speculating on what she may have been thinking and feeling from the time of conception, through to after the birth of Jesus.

“I just admire her faith,” Shushannah said. “Her obedience and her willingness to just jump in and say, ‘OK God, I’m in, no matter the ridicule, no matter what’s coming, I’m in on your plan.’” 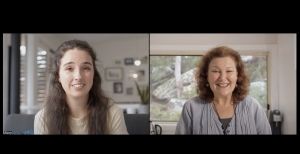 The second film in ‘The Incredible Christmas’ series focuses on a video-call between Mary (left) and her relative, Elizabeth (right).

While Mary’s calling was unique, Shushannah said every Christian is called to follow Jesus, and she encouraged Salvationists to obedience to their own callings. “If God’s calling you to do something, ultimately – as Mary does – turn back to him, have those conversations with him,” she said. “The thing I love about this script is Mary’s openness and honesty with God and her humanness of [asking], ‘Why is this happening?’ [and] ‘I don’t understand.’ Ask him those honest questions but it still results in obedience.”

Shushannah, who is passionate about using drama and acting for the Lord as a form of worship, said she hoped the video series would bring a fresh perspective for Salvationists to the well-known story of Advent.

“I pray that maybe someone who doesn’t know Jesus would think about the story in a different way and take a step closer to Jesus. Or somebody who’s been on the journey for a really long time, sees the videos, and God uses them to speak to them and take them deeper in their relationship.”

The Mary video series can be downloaded from mySalvos toolkit here: my.salvos.org.au/toolkit/resource/the-incredible-christmas---corps-resources-for-christmas-2020/2047