Emergency services personnel working to contain a large bushfire north of Perth have been supported by The Salvation Army's Emergency Services. Here, Marry Hatton (left) and Rick Darlow (right) pick up a meal and a snack-pack.

The Salvation Army’s Emergency Services (SAES) is continuing to serve thousands of meals to fire-fighters and other emergency services personnel battling blazes north of Perth in Western Australia.

It was ‘all-hands-on-deck’ as soon as 2021 began, with Western Australia’s SAES teams called out on 1 January to support emergency services personnel involved in a search operation for a missing person. The next day, a bushfire at Baker’s Hill, west of Perth, saw volunteers serve 1000 meals. That same day, teams were called to support efforts to contain a large fire burning in remote bushland and national park north of Perth. 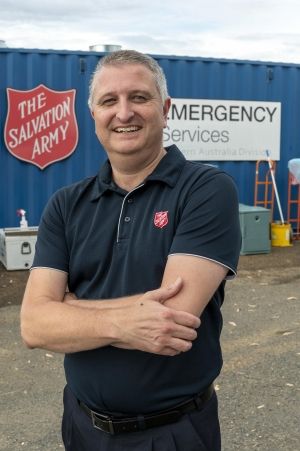 “We are going into our third week now of temperatures over 33 degrees,” said Western Australia Public Relations Secretary Warren Palmer, speaking from the SAES catering site near the Moore River National Park. “We get the hot easterly [wind] off the desert and effectively we have had that for the last week and a half. These are the very difficult circumstances that our volunteers are up against at this point, not to mention the fire-fighters who have to deal with the fire.”

More than 10,000 meals have been served in the first 10 days in January at the various incidents, with hundreds of hours of volunteer service. Warren said new equipment purchased and built in 2020 through the support of a generous bequest and The Salvation Army’s partnership with Woolworths, had been invaluable in providing such a high level of support for emergency services crews.

“At one stage we had three major incidents we were called out to: One here, north of Gin Gin, one out at Wundowie which is around about 70km east of Perth, and one south of Perth at Kwinana. So, having that ability to be able to respond to multiple incidents is extremely valuable.”

Warren said a shipping container that was converted into a mobile catering facility in 2020 allowed the SAES to cater for the large numbers of emergency services personnel over the long-term incident, providing quality meals: “The facilities in the kitchen provide us the ability to cook and do a broad range of meals. It’s just not a ‘sausage in a bun’ type of thing, the quality of the food - salads and nutrition - because we want to keep our fire-fighters in the best place possible nutrition-wise and physically.”

The Salvation Army’s Beacon homelessness service in Perth has also partnered with the SAES to provide a number of pre-cooked meals. A number of local businesses, like Nando’s, were also supportive.

Warren paid tribute to the dozens of volunteers who have served in the remote locations, some travelling up to two hours just to show their love and support to those tackling the blazes: “They have hearts of gold, they are so committed. Many volunteers have done multiple shifts during the week. These people are extremely committed to providing the best service we can for our first responders. “They are the heart and soul of our organisation, a great heartbeat to who we are.”

One of those volunteers has been Ann van Gaalen-Prentice, a soldier at Perth Fortress Corps. When she heard a call-out for more volunteers, she didn’t hesitate to sign up for a shift, having been trained with The Salvation Army's Strategic Emergency and Disaster Management team in Melbourne, Victoria, before moving to Western Australia a year ago.

“I felt really embraced by the emergency services team which I think is incredible ... that’s exactly how it should be as part of The Salvation Army,” she said. Despite a chronic pain condition, Ann served in soaring temperatures alongside other volunteers, whom she said were beautifully inclusive. “It’s difficult when you have physical differences, because I walk with a walking stick normally. The fact is that they [the SAES team] completely saw past that, but at the same time they were considerate enough to say, ‘Look, do you need this while you are in the kitchen?’ and things like that.

“They were willing to accept me as I was, and that to me, spoke volumes.”

She said serving people at their point of need is a way that she can show God’s love in a practical way. “I’ve always had a passion for emergency services and being there when someone needs you. It’s a more tangible way of showing God’s love to someone, to be able to give them some food or clothing if they need it.

“A lot of the time people only know us through emergency services or when they’re having the worst possible time, and that’s when we need to be able to come alongside people and be there for them in a practical way.”