Strengthening support for the disabled 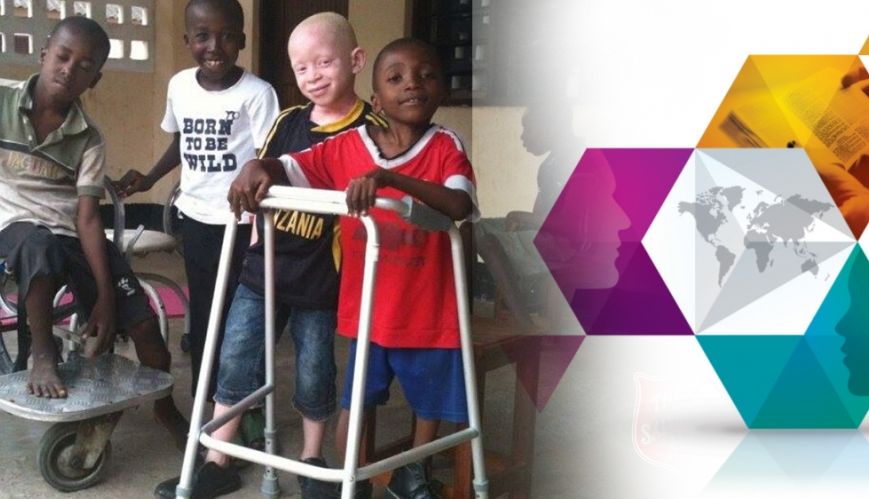 Strengthening support for the disabled

Children from The Salvation Amy’s Matumaini primary boarding school for disabled and albino students in Tanzania.

The Salvation Army’s International Headquarters released a new positional statement to coincide with the 2020 United Nations International Day of Persons with Disabilities in December.

The statement, put together by the International Moral and Social Issues Council and approved by General Brian Peddle, supported the Army’s international mission statement which asserts that it would “meet human needs ... without discrimination”. The United Nations International Day of Persons with Disabilities logo.
The MSIC is comprised of Army officers and soldiers from around the world.

The statement on people living with disabilities said: “All people are made in the image of God and are of equal intrinsic value. Thus, The Salvation Army celebrates difference and seeks to treat all people with dignity and respect”.

In recognising that many people around the world experience discrimination due to their disability, from stigma or negative attitudes to deeply engrained and systemic exclusion, the statement also said: “We know less of who God is and how God appears in the world when people with disabilities are excluded. Inclusion is beneficial for everyone. Diversity within our communities and congregations strengthens us and shapes our mission and ministry. The aim of all Salvationist practice is to ensure that we are a church that makes the embodied gospel accessible for all.

It also said: “The goal of any response should be to eliminate a dividing line between ‘us’ and ‘them’ … The Salvation Army embraces, promotes and models an understanding of persons with disabilities as people created in the image of God, with a unique and invaluable contribution to make in all aspects of life in community.”

The theme of the UN International Day of Persons with Disabilities on 3 December aimed to increase awareness and understanding of disabilities that were not immediately apparent, such as mental illness, chronic pain or fatigue, sight or hearing impairments, diabetes, brain injuries, neurological disorders, learning differences and cognitive dysfunctions, among others.

A World Health Organisation World Report on Disability indicated that 15 per cent of the world’s population – more than one billion people – live with a disability, with many choosing not seek professional medical help, largely due to stigma, discrimination and neglect.

For many people living with disabilities, the potential for isolation was increased by the measures that have been put in place to combat the spread of COVID-19 but the Army is trying to address these extra difficulties in practical ways such as in Kalimpong, India, in the foothills of the Himalayas.

Staff at the Army’s Mary Scott School for blind and partially sighted children have worked to ensure continuity of education since lockdown began in March. Most students returned to their families, which presented a considerable challenge to the team due to the rugged, remote location and limited access to technology and the internet, which restricted online learning so the teachers prepared class notes and other study material ‘printed’ it in Braille and distributed it to all the families, including those who remained.

In Tanzania, the Army has been running for more than 20 years the Matumaini primary boarding school for disabled and albino children – the largest school of its kind in the east African country. As well as education and support for the children, it provides physical therapy and operates a workshop for the manufacturing and repair of walking appliances and chairs. For many of the children at Matumaini, the school provides the opportunity to have a full and active life, with skills that enable them to take a full part in society. A number of children also benefit from simple corrective surgery that enables them to walk unaided.

In the United Kingdom, the Steps to Work program at the Strawberry Field facility in Liverpool, reaches out to young adults with learning difficulties or other barriers to employment through a training hub. It offers a 12-18 month program for 18-25-year-olds that combines education and work placements to ensure trainees are truly work-ready.

Steps to Work consists of an eight-week work readiness course, followed by three different three-month work placements. These placements include two days per week of vocational training and two days per week in a work environment to move young people into employment or meaningful volunteering.