Lyn's courageous act of kindness reunites a father and son 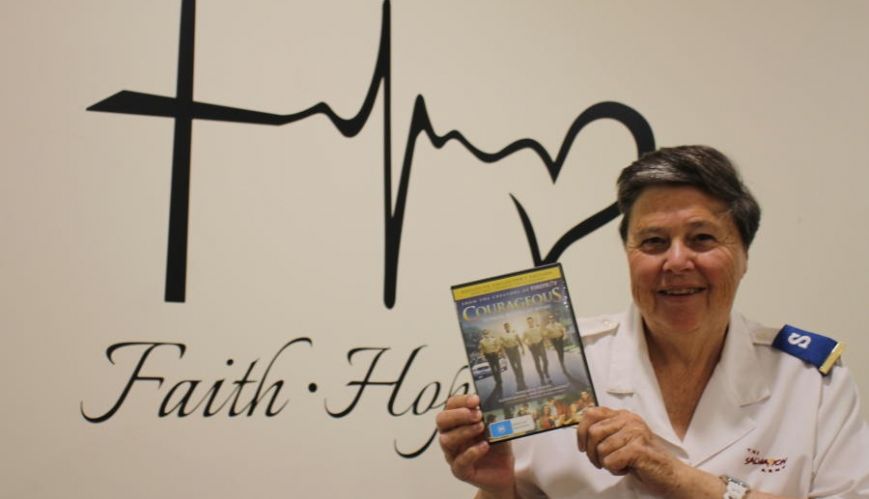 Lyn's courageous act of kindness reunites a father and son

When Lismore Salvationist Lyn Scotney reached out to a stranger on Father’s Day, a beautiful friendship was born and lives transformed through the love of Jesus.

When Captains Philip and Donna Sutcliffe handed their congregation copies of a ‘fatherhood’ DVD on Father’s Day 2020, little did they know the impact it would make.

The Sutcliffes, Corps Officers at Lismore in northern NSW, marked the 6 September occasion by distributing DVD copies of Courageous, a moving film based on domestic issues confronting four law enforcement officers. Recipients were invited to forward the DVD to a friend or family member who could benefit from its challenge relating to fatherhood.

And that’s what Salvationist Lyn Scotney did when visiting a nearby supermarket as soon as the service concluded, never envisaging the life-changing story that would evolve from a simple act of kindness.

Lyn encountered an elderly man sitting outside the supermarket and looking to her as though he needed a friend. So, she introduced herself and asked if she could sit and chat. The man, named Graham, then revealed his life story. It was a sad story about alcoholism, domestic violence and not having spoken to his son Brian for 18 years.

At this point, Lyn believes God intervened. “I asked Graham would he do me a favour by accepting my DVD then give me a call for his thoughts after watching it,” she said. “I didn't hear anything for over a week, then Graham rang. He was excited. He said the DVD tugged at his heartstrings and he was compelled to ring his son Brian, which he did. Brian was in shock after all these years. They reunited for a coffee and a meal out.”

Lyn said everything was going really well until Brian told his father he was dying of brain cancer.

“Graham kept in touch with me,” said Lyn. “Amongst other things, he asked if I could teach him how to pray to help his son. He said he couldn’t use all the fancy words, so I said to him, ‘Talk to God like you are talking to me because God understands when it is coming from the heart.’”

At church the following week, Captain Philip Sutcliffe announced that he had received a thank-you letter directed to Lyn from Brian, mentioning that “the world would be a better place if there were more caring Lyn Scotneys”.

A few weeks later, Graham told Lyn that his son had been admitted to a Gold Coast hospital. Aged 88, and not holding a driver’s licence, Graham was offered a lift to the Gold Coast by a friend, but once there was told there was little that could be done for Brian as the tumour had moved to an awkward position.

COVID-19 border restrictions prevented Lyn from visiting the hospital; however, God again intervened and after some negotiation, a phone hook-up was arranged between herself, Graham and Brian. They prayed for strength, calmness and healing.

Sadly, six days later, Graham who was also suffering from serious health issues, collapsed in a lift and despite treatment, passed away.

“When Brian received the news, he said there was nothing more to live for. He refused further treatment and a few days after his father’s death, he, too, left this life,” Lyn said.

Lyn’s boldness in reaching out to Graham outside that shopping centre encapsulated The Salvation Army’s vision statement: “Wherever there is hardship or injustice, Salvos will live, love and fight, alongside others, to transform Australia one life at a time, with the love of Jesus.”

Lyn’s love for Jesus resulted in a father and son reuniting after many years and even praying together, transforming two lives at once.

Kevin Elsley is a soldier of Lismore Corps in northern NSW