Salvation Army Emergency Services vehicles and volunteers were called to the Adelaide Hills at the weekend as a bushfire broke out.

The Salvation Army Emergency Services (SAES) in South Australia was called out to assist frontline firefighters and support crews at a bushfire in the Cherry Gardens area of the Mount Lofty Ranges on the outskirts of Adelaide at the weekend.

The fire threatened to burn into the Australia Day holiday but Mark Foyle, Public Relations Secretary for the South Australia/Northern Territory Division, said that with cooler temperatures on Monday and rain during the day, the Country Fire Service (CFS) was able to bring the fire under control quicker than expected.

Mark said that by Monday afternoon the Army’s involvement in providing food and drink and other support to the firefighters was “winding down”. Despite the rain and reduced SAES involvement, Mark said on Monday “the emergency was not over”.

Major David Boughton, South Australia’s Strategic Emergency and Disaster Management coordinator, said his crews had little sleep on the night the fire broke out but as it was brought under control, the need was less great.

David said he expected tomorrow would be the last day his crews would be required.

The Army's teams had prepared up to 300 meals “per sitting” at the height of the crisis but that had been reduced to 75 by Monday evening. 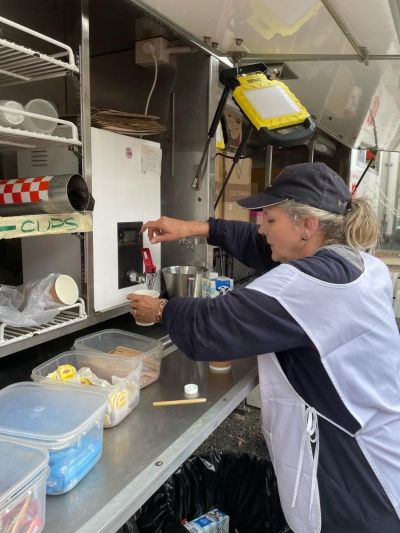 Another hot drink is prepared by a SAES team member for the Adelaide Hills bushfire crew.

He said the teams were not required to serve breakfast on Tuesday (Australia Day) and did a “reduced lunch”.

David said more than 2000 meals had been served since the fire broke.

By late Monday night, the CFS had announced that the fire, which had been fought from the air and on the ground, had been contained and only skeleton crews would remain in the area for several days to monitor the remnants of the blaze and to respond to “any flare-ups”.

Backburning, which normally would be done at that point was not possible because heavy rain had dampened the trees and scrub.

CFS Deputy Chief Officer Andrew Stark said more than 400 firefighters and 50 vehicles battled the blaze, which destroyed more than 2700 hectares of scrub and grasslands. The crews worked on Australia Day to “mop up and black out the fireground”.

Two homes and 17 outbuildings were destroyed but another 60 homes were saved.

Residents in the towns of Longwood, Mylor, Biggs Flat, Scott Creek, Chapel Hill, Cherry Gardens and Mount Bold were in the path of the fire early Monday with residents being told to leave if safe to do so. People living in other areas were asked to keep a close eye on the fire with “watch and act” advice in place.

Andrew said conditions were “very hot” for firefighters with some having suffered stress and dehydration.

David said the fire had the potential to have been far worse than it was: “If they (the firefighters) didn’t contain it, it would have been very bad,” he said.

He said the Army’s Mt Barker crew, which covered the area where the fire burned, was assisted by crews from corps including Ingle Farm, Gawler, Adelaide Congress Hall, Noarlunga, Marion and Golden Grove.

The weekend fire came on the back of a large blaze at Blackford about 345km south-east of Adelaide on 11-12 January, which saw about 15,000ha and three houses destroyed. The SAES team from Mount Gambier was involved in supporting the firefighters. About 500 firefighters, 40 fire trucks and airborne waterbombers brought that blaze under control.