Army stands by National Guard in the US Army stands by National Guard in the US

National leaders Commissioners Kenneth and Jolene Hodder (centre) and Majors Mark and Rhea Woodcock, Commanders for the National Capital Area Command (far left), stand with a National Guardsman and two NCAC volunteers during the operation in Washington DC in the lead-up to the inauguration of the new United States president.

The Salvation Army had a unique role during the lead-up to and inauguration of United States president Joe Biden last month. Volunteers from The Salvation Army’s National Capitol Area Command in Washington DC stood alongside the National Guard at the Capitol Building and White House.

National Guard troops were posted around the landmarks and other locations in an effort to maintain calm after public unrest and demonstrations in reaction to the US presidential election result.

Ken Forsythe, the command’s communications director, said the Salvationist volunteers, including US National Commanders Commissioners Kenneth and Jolene Hodder, handed out snacks and hot drinks on the eve of inauguration day as soldiers stood at their posts. They were also to maintain their positions for the first few days of the new presidency. Kenneth said it was a privilege to be part of the ministry initiative. 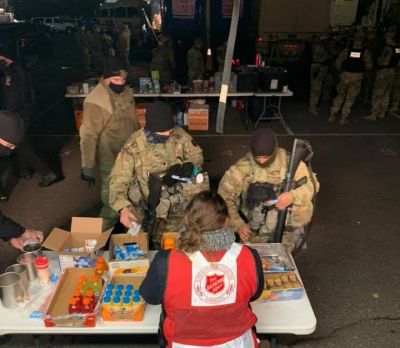 Fully kitted-out US National Guard troops line up on the eve of the presidential inauguration for some supplies from an Army volunteer.

Joe Biden took office on Wednesday 20 January [US time] as the 46th US president.

The inauguration was carried out differently this year after outgoing president Donald Trump refused to attend and carry out traditional ceremonial and courtesy duties. Also, due to the unrest and COVID-19 restrictions, much of the process was done virtually or by adhering to social-distancing guidelines.

Ken said that an important component of The Salvation Army’s presence was to provide emotional and spiritual counselling. Around 240 of the more than 3880 National Guard contingent requested that assistance. He added that more than 2700 drinks and 4500 snacks were given out.

Ken said the Army had made an appeal online for donations to assist with that ministry effort but the response was “modest”, although 4000 hand warmers were donated.