Yurlku - connecting with God and each other in Port Augusta Yurlku - connecting with God and each other in Port Augusta

Some of the women from the Create Craft component of Port Augusta’s Yurlku weekend proudly show their boro quilting squares.

An intergenerational Salvation Army event held in the South Australian town of Port Augusta at the weekend saw an Area Leadership Team (ALT) unite in ministry.

Port Augusta Corps Officer Major Gaye Day said ‘Yurlku’ was the special name given to the weekend of activities for all ages, which saw people attend from all over the South Australia North area, which stretches from Riverland Corps in the east to Port Lincoln Corps in the south.

Gaye said staff from South Australia/Northern Territory Divisional Headquarters, some of whom had not been to Port Augusta, took a leadership role in the weekend – from giving craft demonstrations, serving and speaking at a men’s breakfast to talking technology. 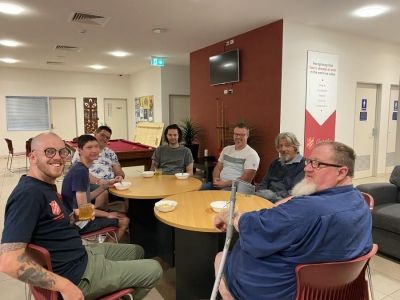 Chow time: Some of the men who attended the Yurlku men’s breakfast.

She said the weekend was “all set to go” late last year but a COVID-19 lockdown in Adelaide meant the divisional staff were unable to travel, so the event was postponed.

It was decided that the event would be a good way to begin 2021 and all corps within the South Australia North ALT be invited.

Gaye said she had asked a traditional Aboriginal elder in the community for a word she could use to describe the weekend, having explained the text and schedule for the two days.

She said she was given ‘yurlku’, which means ‘heart’ – a word that would be recognised by most of the Indigenous nations around Port Augusta. “The majority of them would have some sort of that word [in their language] that they would see it and recognised it as ‘heart’,” Gaye said.

Major Susan Wallace, Area Officer, used Proverbs 4:23 as the text for her message on the Sunday: “Above all else, guard your heart; for everything you do flows from it.” Her message concentrated on how the spiritual ‘heart’ connected a person to God and each other: “Therefore it is valuable and we must do everything we can to protect it from the influences of the world and keep it healthy, as who we are flows from it.”

For the men, there was to be a breakfast at which Divisional Worship Arts Coordinator Dan Casey spoke, and this to have been followed by a fishing trip, but that did not eventually happen. Instead, the men joined the technology and video workshop, which originally had been a youth activity.

For the children, Divisional Youth and Children’s Ministries Coordinator Deb Elliott ran a number of events for the KidZone children.

The major event for the weekend was a ‘Create Craft Day’ for women, which ran from 10am-3pm on the Saturday.

Major Christine Waller, Divisional Adults and Seniors Secretary, shared with the women her expertise in boro quilting, while Gaye shared her skills in glass etching.

Gaye said she had not used her etching skills for more than five years – after she was transferred from Emerald Corps where she was taught the art by one of the women in the corps there, Anna Wyper. She said it was an easy skill to pick up and was popular on the day.

Port Augusta Corps hopes to either host the event annually or run similar activities during the year.