Salvos open door to recovery phase in the west 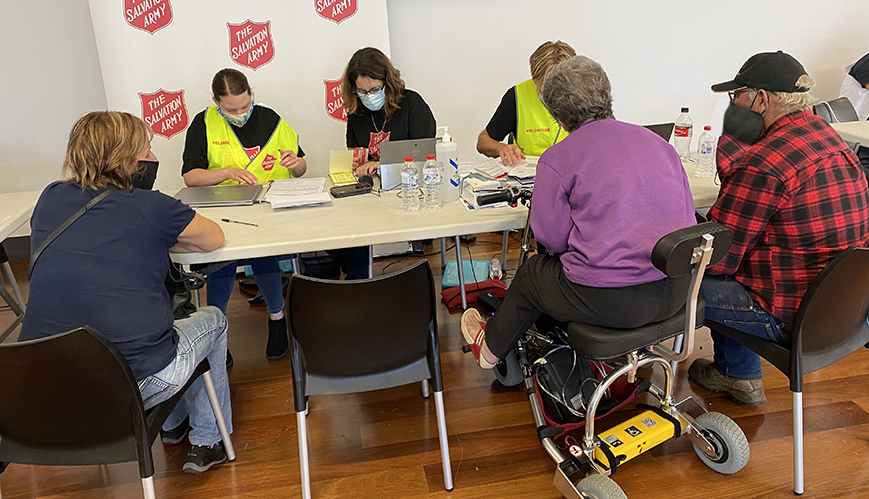 Salvos open door to recovery phase in the west

Members of The Salvation Army Doorways team in Western Australia support locals affected by the fires at Gidgegannup Recovery Centre earlier this week.

After weeks of fires, floods and a COVID lockdown in Western Australia, The Salvation Army has entered the recovery phase of support now that conditions have eased.

The Salvation Army Doorways team is now based at the Gidgegannup Recovery Centre, 40km north-west of Perth. Three team members are offering financial counselling, vouchers and emotional support to about 20 people a day, dispersing up to $20,000 daily in cash grants.

During the bushfire crisis, The Salvation Army was represented at two evacuation centres in Gidgegannup and Swan View, which have since closed. The latter sheltered more than 400 people at the height of the fires, which raged out of control east of Perth.

Lindsay expects the Doorways team to be active in the region’s bushfire recovery for at least 18 months and knows more than financial aid is required as many people literally rebuild their homes.

“There will be ongoing support in financial counselling. And [we will be there] if people want to talk about the emotional, relational side of things. And the spiritual side of things – lots of people will find that there is a God when they need one,” he said.

“Bushfires, floods, COVID ... it’s a patchwork, it’s been chaotic,” said Warren. “We now move into a recovery phase so we can stabilise people and they can start to look farther [ahead]. Then they can be clearer about a longer-term recovery plan.”

SAES personnel wrapped up catering east of Perth on Tuesday, after providing more than 18,000 meals during the Wooroloo fires. The move came after the fires were downgraded to ‘advice,’ making way for other Salvation Army personnel to step into the recovery phase of the disaster.

More than 80 homes were lost in the fires, which have been extinguished thanks to the efforts of firefighters and some welcome rain. The wet weather system, however, caused some flooding in the area as well as vast tracts of land in the Carnarvon region in the state’s north.

With the fires, floods and lockdown now eased, things are looking more hopeful.

In a show of solidarity, staff and volunteers have stepped up during the crisis including the teams at Beacon housing services, and the corps at Swan View and Morley. In addition, multiple businesses have donated goods, including Nandos, which donated more than 800 roast chickens over several weeks to help the SAES feed firefighters.

As the Salvos commit to the long journey of recovery with the community, Lindsay says his team are more than up to the task. “I’ve got a couple of team leaders who are fabulous,” he said.