Team members from The Salvation Army’s COVID-19 Compliance and Awareness Campaign in South Africa hand relief packs to some of the truck drivers waiting for virus test results at the country’s border.

The Salvation Army in southern Africa has been gallantly attending to, as best it can, the needs of the long line of hungry, thirsty and frustrated people stranded at borders in the north and east of South Africa and neighbouring countries. 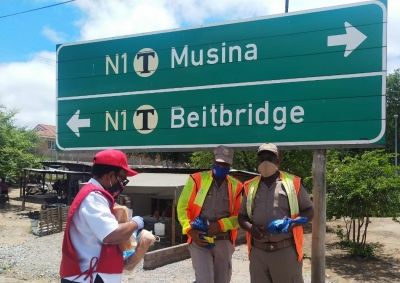 Not only has The Salvation Army brought relief for those seeking to cross borders but also to the authorities controlling the checkpoints.

Captain Velani Buthelezi, the South Africa Territory Public Relations Secretary, said the effort, being called the COVID-19 Compliance and Awareness Campaign, was launched at specific border posts within hours of the borders being ordered closed by South African President Cyril Ramaphosa to stem the spread of the disease.

Major Heather Rossouw said the Army teams gave out COVID-19 awareness packs to 800 people on the first day – and continue to give out that number each day. The borders are to remain closed until at least mid-February.

She said the packs consisted of bottled water, long-life milk, bread, energy bars, fruit and sweet treats, a bar of soap, a washcloth and hand sanitiser, a COVID-19 awareness bookmark and an anti-human trafficking brochure.

On the Mozambique side of the border, the Assistant Territorial Project Officer, Lieutenant Delfina Zualo, said a similar effort had been put in place by the Army there giving out rice, beans and cooking oil at the Ponta d’ouro border post.

Velani said the Army hoped to help alleviate suffering and give hope and comfort as border staff rushed to process the many hundreds of COVID-19 tests and clear the subsequent queues.

“With enhanced border control measures introduced to help minimise the spread of a new, more transmissible, strain of COVID-19, travellers have been stranded for several days while borders have been temporarily closed only open for business,” Velani said.

The Army teams, each consisting of 11 people, wear personal protective equipment. Velani said that, at each location, people trying to cross the border had been delayed by up to six days in extreme heat, resulting in dehydration, heat exhaustion, malnutrition and significant stress. On the Mozambique side of the South African border, relief packs of rice, beans and cooking oil are prepared for handing out at the Ponta d’ouro border post.

In some instances, queues of trucks waiting to convey goods across the border have stretched back for more than 15km.

The Army has also been able to bring relief to some border post staff working in the same trying conditions.

The Salvation Army’s Territorial Leaders for Southern Africa, Colonels Daniel and Tracey Kasuso, formed part of the team at the Beitbridge border post, while Chief Secretary and Territorial Secretary for Women’s Ministries Lieut-Colonel Jabulani and Fikile Khoza were part of Lebombo border team.

Velani said that along with the snacks and hygiene items, the packs contained a new public health poster campaign, developed by International Headquarters which had been translated into Afrikaans, Xhosa, Zulu and other southern African languages.

The Army has also handed leaflets with information on being alert to the risks of being drawn into human trafficking across the borders.