On Saturday 27 February, the Box Hill community gathered at 1010 Whitehorse Road to celebrate the official opening and dedication of the new Box Hill Corps facility. 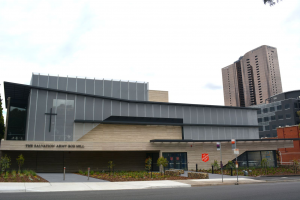 The new Salvation Army building at 1010 Whitehorse Road is a development that benefits the entire community.

The new building is a 3238 square-metre complex and includes an undercover and open-air car park with spaces for almost 130 cars.

The multi-million-dollar development is the result of a community partnership between The Salvation Army, Epworth Eastern Hospital and Box Hill Institute that was formed in 2017.

The agreement set out development plans for each organisation to deliver on individual strategic goals.

Epworth Eastern was fast reaching capacity and needed to grow in order to deliver new beds, theatres, consulting suites and emergency care if it was to keep pace with the growing healthcare needs of the community we serve in Melbourne’s east.

At the same time, Box Hill Institute's nursing school was too small and unable to cope with its waiting list – requiring a new facility to keep pace with the growing education and training demands.

The Salvation Army in turn were looking to refurbish and develop facilities that would bring together their religious, social and community programs, while providing more space for an expanding congregation into the future.

As an agreement of this partnership, the corps agreed to hand over its Nelson Road premises to Epworth Eastern in return for the hospital to manage and construct a brand new church building located a short distance away, next to Box Hill Town Hall.

Indeed, in a serendipitous twist of fate, the new building acknowledges the corps' ‘coming home journey’. It was in 1891 when The Salvation Army first came to Box Hill, located almost exactly at the new 1010 Whitehorse Road location.

The corps brass band was on hand to celebrate, along with Corps Officers Major Brian Saunders and Lieut-Colonel Debra Stevens, who thanked Epworth Eastern, Box Hill Institute, as well as JMA Architects, and Lloyd Builders Group who were responsible for the building's incredible presence.

Territorial leaders, Commissioners Janine and Robert Donaldson dedicated the new building, wishing the Box Hill Salvationists and their partners every success. “You represent all that Box Hill is, and can be,” said Commissioner Robert.

Commissioner Janine went on to pray that “the love of Christ [would] be at the centre of all that takes place here”.

In one of his first public acts as the new Victorian Divisional Commander, Lieut-Colonel David Godkin invited people to join him in prayer, thanking God that, “this is not about a building, but about the people in this community. May it be a place of hope, where they will find peace and comfort, inspired and refreshed by your Spirit.”

Executive General Manager, Kerry May said Epworth Eastern and The Salvation Army Box Hill had a wonderful history of working closely together.

"Our staff have always viewed our partnership with a sense of pride." she said.

"Initially forged through our proximity as neighbours, but very quickly as time passed, because of our shared organisational values and ambitions. 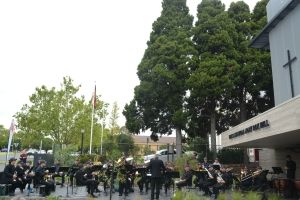 The Melbourne Staff Band, the Salvos Big Band and the Box Hill Town Band played throughout the day, celebrating the opening of the new building which has been several years in the making.

"And while the Salvos may have moved just down the road, we will continue to support The Salvation Army in their many important community initiatives - such as the annual Christmas Appeal."

Gladys Liu, Federal Member for Chisholm, shared a personal memory of appreciation of the Salvos, having attended a bilingual playgroup in earlier years where she was supported and befriended by Major Donni Pho.

“I remember wearing the Red Shield vest and shaking the tin at intersections,” Ms Liu said, “and I felt really good. That’s the Salvation Army spirit, looking after other people.

“I hope many people come here and enjoy church services in English, Korean and Chinese languages, she added. “Also, while governments can and should do their best to meet needs, in the end we need community groups like The Salvation Army. I thank the Army for the love, care and food parcels given to those who needed them to survive during COVID.”

Paul Hamer MP, State Member for Box Hill, congratulated the Army on its 'new digs'. He said the corps was “a place that can be used by the community, for the community, right on the main road,” and thanked the Salvos for their support of Box Hill citizens throughout COVID-19, saying that “the church stood up, and I am grateful”.

It was a day of celebration, and the Melbourne Staff Band, the Salvos Big Band and the Box Hill City Band provided musical support throughout the day, while children played games, people sipped coffees in the café, and Box Hill Corps’ partners shared gifts and information through an expo held undercover in the car park.

The corps’ oldest soldier, Charles Cockram, declared he was 'tickled pink' by the day’s events, saying, “I hope we get many sinners in, and that they leave as saints”.