Family day a hit in the Adelaide Hills Family day a hit in the Adelaide Hills

Thomas (left) and Matiu Summers get together for a game of tether tennis as part of Mt Barker’s inaugural Hills Families Celebration.

The hills are alive with the sound of ... families having fun! The Salvation Army in South Australia is building community connections through a new ministry – in the Adelaide Hills.

Samuel Hateley, director of Family, Youth and Children’s Ministries for Mt Barker Corps, said his team introduced the ministry initiative on 7 February, known as Hills Families Celebration. The launch event was a BYO lunch in Keith Stephenson Park in Mt Barker and about 30 people attended.

“It was a great afternoon, with lots of laughter and fun,” Sam said. “We were even able to connect with a family at the park, who joined in on some of the activities we had around. They are excited to come along to the next Hills Families Celebration.

“Without going out in our community, we wouldn’t have been able to make that connection.”

Sam said the initiative, which developed after conversations he and corps Family Ministries coordinator Liv Carnell had with the corps officers, Lieutenants Daniel and Andrea Wayman, was “all about connection”: “We are wanting to provide somewhere for the families of the Adelaide Hills to come together and do life, build community [and] make long-lasting friendships.

“We are creating a space in which families are comfortable to just be themselves. Our once-a-month celebration is where we come together as a wider family,” Sam said. 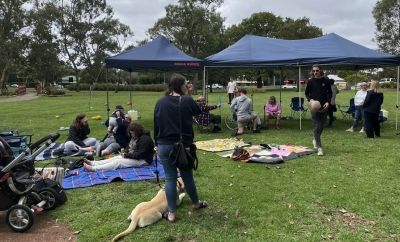 Families gather in Keith Stephenson Park as part of a new ministry of Mt Barker Corps in the Adelaide Hills.

“Liv is the main driver behind this ministry ... and a couple of people who are eager to help out.”

The corps plans to run a similar program in the same park each month – a barbecue lunch in a “super-relaxed environment” to intentionally connect with the families gathered there – and, eventually, generate enough interest to begin a Mums Night Out, a Guys Day and other family activities throughout the year, finishing with a Christmas dinner.

Daniel and Andrea said the new ministry was an extension of its children’s and families program and was part of a deliberate approach by the corps to reach out to the community; the demographic of which had changed from being predominantly of retirement age as more younger families had moved into the area.

“Our dream for Hills Families is to see mums, dads [and] grandparents catching up during the week; feeling like they are a part of a community that supports them through the tough times and celebrates the good times,” Sam said.

“Whilst this isn’t your traditional church service, we believe that, as a movement, we are a church that is based on meeting people where they are so that they can have an encounter with Jesus, which may lead to something so much more.”

Sam said loneliness was “quite prominent” in the Adelaide Hills area, which was something the corps aimed “to make disappear”: “We want to see families grow as a unit and experience the love of Jesus as a family unit. We want everyone to know that they have a purpose, that they are loved and that they belong.”