Salvation Army Emergency Services (SAES) personnel and volunteers have leapt into action at evacuation centres along the NSW coast in response to flooding. Pictured above, Colonel Kelvin Merrett (second from right) joins the team of volunteers at Kempsey over the weekend. The evacuation centre at the Kempsey Showground has since increased in capacity after residents in the CBD were ordered to evacuate at midnight Sunday. 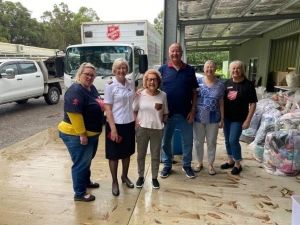 Volunteers at the Kempsey Showground evacuation centre have been working round the clock to support locals and emergency services. Chief Secretary Colonel Winsome Merrett (second from left) came by to give them a hand.

Nineteen evacuation centres have been established between Taree and Nambucca Heads on the Mid-North Coast, with the SAES mobilising at 11 of these as of early this morning. Where flooding is preventing access to affected towns, the SAES has been providing remote support.

The SAES and other Salvation Army personnel have been catering to evacuees, volunteers and staff working at these evacuation centres and have served 1640 meals since mobilising on Friday afternoon.

From standby to activation

At 3pm last Thursday afternoon, The Salvation Army Strategic Emergency and Disaster Management (SE&DM) team received a warning from the state government about the oncoming weather event. Volunteers were put on standby across the state and had activated less than 24 hours later.

Norm Archer, SE&DM coordinator for NSW/ACT, said this event had unfolded quicker than many other recent events, going from normal to an extreme flooding situation in a matter of hours. 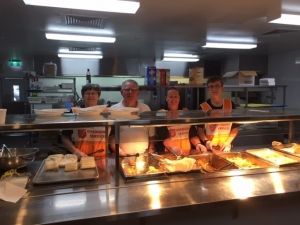 “That changes the rules. And as much as you’re prepared, if you think you’ve got six hours and you’ve only got three, that increases the stress and difficulty of the situation,” Norm said.

“Some of the areas have had record flood peaks in this event – one town recording 300mm in two hours,” Norm said.  “So, as much as you want to prepare and get ready, the speed of this event has definitely been a challenge for people to overcome.

“Nothing happens without the efforts of our volunteers and their willingness to put their lives on hold and get involved. We’re really thankful for the support of our volunteers, yet again, and Woolworths, who are our support partners.”

SAES volunteers are cooking up to 100 meals a day for evacuees and emergency services personnel at evacuation centres across the NSW eastern seaboard.

For those who have evacuated, there is uncertainty around what they will come back to when the floodwaters recede.

“We know there are homes that have got a couple of metres of water through them,” Norm said. “So that means what the people have with them is what they’ve got. I think it’s appropriate to say at this point that this is still a very early phase of this event and the full impact on the communities won’t be known until people and agencies get back in there to assess the damage.”

Norm believes his emergency teams will be operational and at a high level of readiness for the next week.

“So as much as we may wrap up and finish work because they close one evacuation centre, our volunteers across NSW will be activated and helping communities at the next site where the flood event causes grief,” he said.

“While the deluges continue and we wait to see the full extent of the damage, our Salvation Army volunteers and support staff will remain on the frontlines to assist whoever, and wherever is we are needed.

“We urge everyone to take care and will continue to bring you developments as we learn more. If you, or someone you know, is in need of support, please do not hesitate to reach out to our teams, the emergency service men and women on the frontlines, or call 000 in an emergency.”