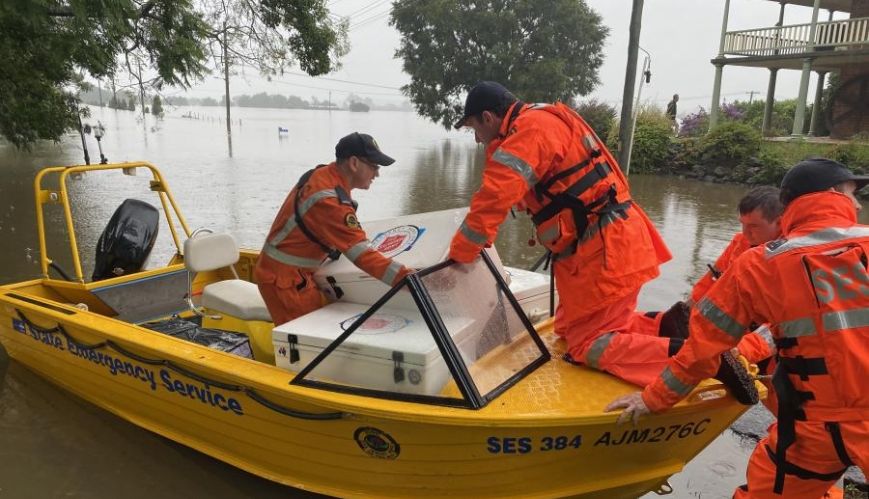 State Emergency Service crews ferry food supplies to The Salvation Army Emergency Services team working at an evacuation centre in North Richmond, west of Sydney, that was cut off by floodwaters.

Just over 12 months ago, the skies over much of New South Wales were filled with smoke as bushfires raged and temperatures soared. Fast forward to March 2021 and the skies have taken on a different look, with a week of torrential rain resulting in devastating floods across much of the state.

It’s been with a sense of sombre familiarity that Salvation Army Emergency Services (SAES) teams have once-again swung into action to serve communities in crisis. Many of the state’s major river systems along the eastern seaboard have burst their banks, with the worst of the flooding hitting the Mid-North Coast and outlying areas of western Sydney.

SAES teams continue to serve at numerous evacuation centres across the state, with more than 3000 meals handed out since 19 March.

When SAES volunteer and Rouse Hill Salvo Terry Capon answered the call to serve in north-west Sydney, he found himself on the opposite side of the Hawkesbury River to his home and family. Despite being cut off by floodwaters, he set his mind to heading up a Salvo emergency catering team with food supplies that were rapidly diminishing.

“We are totally cut off,” he said. “The food in this area is fast running out because everyone is stocking up their homes, the supermarkets look like they did at the height of the COVID clearance, but unlike when they were in COVID, the supermarkets can’t restock.”

Terry has had years of experience serving at the frontline in floods and fires, at evacuation centres, remote fire-staging grounds and, during the 2019-20 bushfire disaster, at the Rural Fire Service base camp where SAES teams served hundreds of meals a day. But this week’s flooding event is a situation he’s never experienced before. “But at the moment I’m still in a good mood!” he quipped. 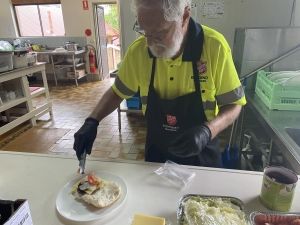 Serving alongside Terry Capon at an evacuation centre in the Hawkesbury is SAES volunteer Bob O’Reilly, here making lunches.

“We have just had a mercy shipment ferried across the river from the Sydney side [from the State Emergency Service] so we can cook meals for the next three days,” he said, speaking from the Meroo Christian Camp, which has been opened to house people in the area that needed to evacuate. The team is also catering to people at another nearby evacuation centre.

Terry is one of the dozens of dedicated SAES personnel and volunteers who have dropped everything to serve because of their heart to show God’s love to people at their point of need.

“For the moment I’m stuck on this side of the river away from home until the river goes down ... and we are not sure how long that is going to be. I like to help where I can,” he added.

In the space of 24 hours at the weekend, the Mid-North Coast town of Taree was cut off by floodwaters, as homes and businesses became inundated. SAES volunteer Gordon Jones pours the gravy as Lyn Jones prepares to serve a hot meal to people stranded due to floodwaters at Club Taree on the NSW Mid-North Coast.

“The floods came up really suddenly overnight on Friday night,” said Taree Corps Officer Major Sandy Hogg. “On Saturday morning we woke up to people being evacuated and having to leave houses that were already flooded.”

It’s been more than 12 months of “one disaster after another” for so many NSW communities impacted by the 2019-20 bushfires, COVID-19 and now devastating floods. “We just stepped straight back into it,” said Sandy of her dedicated SAES team. “That was one of the advantages of the bushfires – we just knew what to do.”

Her team was one of dozens from across the state who turned up at evacuation centres to serve the thousands of people forced to leave their homes as the major wet-weather system pummelled the state. “We have an absolutely wonderful bunch of volunteers and everyone has pulled together so well,” Sandy said.

And while floodwaters peaked over the weekend in Taree, and those who can have now returned home, Sandy knows that the recovery – like that of the bushfires – will be ongoing for a long time. She’s worried about how people are going to cope when resilience levels were already so low.

“Everybody’s just had enough of it,” she said. “We all just kind of think: ‘What’s next?’ I sense a lot of frustration and a lot of fear. It’s very sad and a very disheartening time.”

NSW/ACT Divisional Commander Lieutenant-Colonel Miriam Gluyas was herself stranded in Port Macquarie after travelling there to conduct the retirement service of Majors David and Lea Palmer, which was cancelled. She said personnel and volunteers have again been “amazing” in trying circumstances.

She spoke about the need for people to have “adaptive resilience” during times such as these. “We don’t just go back to ‘same-old, same-old’ – we find better ways to be resilient and adapt to whatever’s happening next. We are becoming very good at adaptive resilience and finding the best ways to serve.”