Victor Harbor 'dusts off' the past and moves to 'new nest' 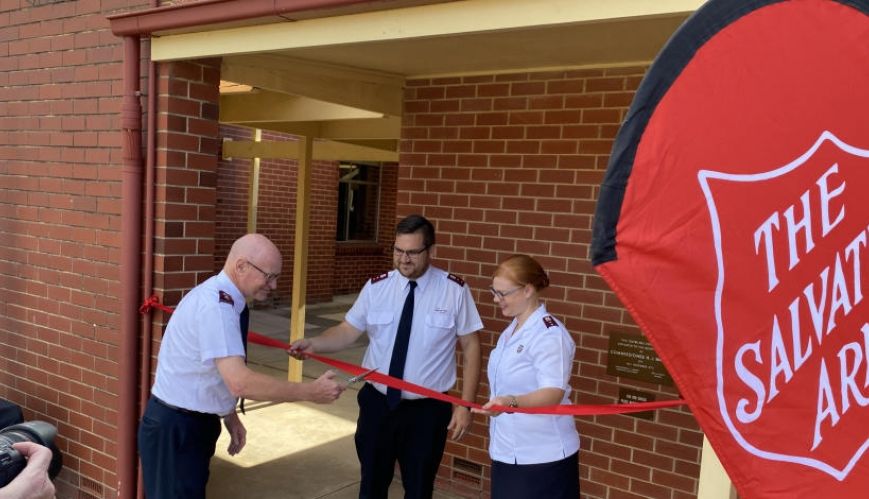 Victor Harbor 'dusts off' the past and moves to 'new nest'

“A big turning point”, “a new nest” and a “dusting off” of old approaches to local mission delivery were some of the descriptions used to announce the “homecoming” of Victor Harbor Corps in South Australia.

The corps closed its old barracks in Crozier Road late last year to move into a redeveloped site on Bartel Boulevard, Encounter Bay – about 2.5km away. 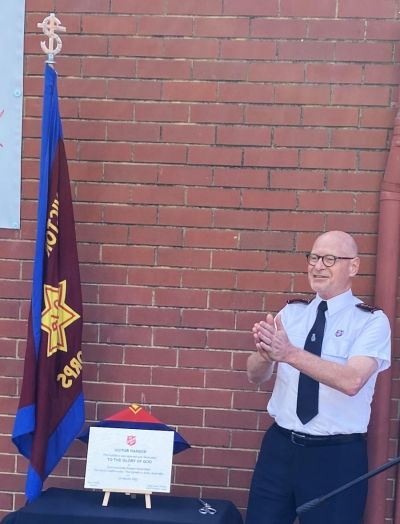 The final service in the old building, where the corps had worshipped for more than 35 years, was held in November. The following weekend, the congregation met in the new facility but had put off having an official opening until the Australian Territory leaders, Commissioners Janine and Robert Donaldson, were available to attend and unveil the plaque commemorating the move on 28 March.

The final service at Crozier Road included the marching out and marching in of the colours [flags].

The official opening of the new facility was expected to have coincided with the installation of the new corps officers, Captains Kylie and Nathan Hodges, but was delayed until the Palm Sunday weekend. The Hodges follow Majors Howard and Elaine Trendell who have retired.

Robert cut the ribbon to officially open the new complex. “You call this home now ‘for the glory of God’,” he said. “It is a place to welcome people so they can begin a beautiful pathway of faith.”

Robert said the complex was reopened “for the same [original] purpose [for the glory of God] but in a different way – a new thing in an old thing, done in a contemporary way to serve a modern world.”

In her address during the opening ceremony, the seaside city’s mayor, Dr Moira Jenkins, described the site as “a new home”.

Moira said the Army held “a special place” for her, having worked as a psychologist as part of the SalvoPsych initiative, which was aligned with the Australian Psychologist Society of Australia (South Australia branch) that aims to help marginalised and disadvantaged people receive psychological assessment and intervention, as well as counselling and other support, in addition to that already offered by the Army. A cake was made to commemorate the opening of the relocated Victor Harbor Corps, which was cut by Commissioner Robert Donaldson and the Hodges.

“The Salvation Army has a new home; a new nest; a new sacred place where you can do your work,” Moira said. “From this place, God’s love and your work can spread throughout Victor Harbor. Welcome home,” she said.

The corps also unveiled a drop-in games, ministry, mission and administration space, which would also serve as a hub for allied community services. The Army’s Doorways program, which helps in the delivery of emergency relief services across the country, would also operate from that facility.

Area Officer for the South Australia/Northern Territory Division, Major Dean Clarke, said the redevelopment was made possible through the sale of the Army’s Encounters Conference Centre, which was a dormitory-style, group-accommodation facility.

Dean said with the Army “divesting its campsites”, the decision was made to sell Encounters and the Victor Harbour Corps bought it. He said the larger site provided increased space and opportunities for ministry and mission.

SA/NT divisional leader Major Anne Jeffrey said the redeveloped complex provided an opportunity for the congregation to allow Jesus to help “dust ourselves off and set us on our way again”.

The worship service that followed included the swearing-in of a junior soldier, seven-year-old Caleb Hodges.

The service concluded with the singing of the song, ‘I’ll Go in the Strength of the Lord’, and a traditional ‘hallelujah wind-up’ including a procession of the young and the old – acting colour sergeant James Leigh taking the flag and leading around the hall a ‘procession’ of corps folk, which included 89-year-old Isabel Curtis.

Nathan said the new site would provide “great and exciting new missional opportunities” for the corps. “We are excited about what the future holds,” he said.