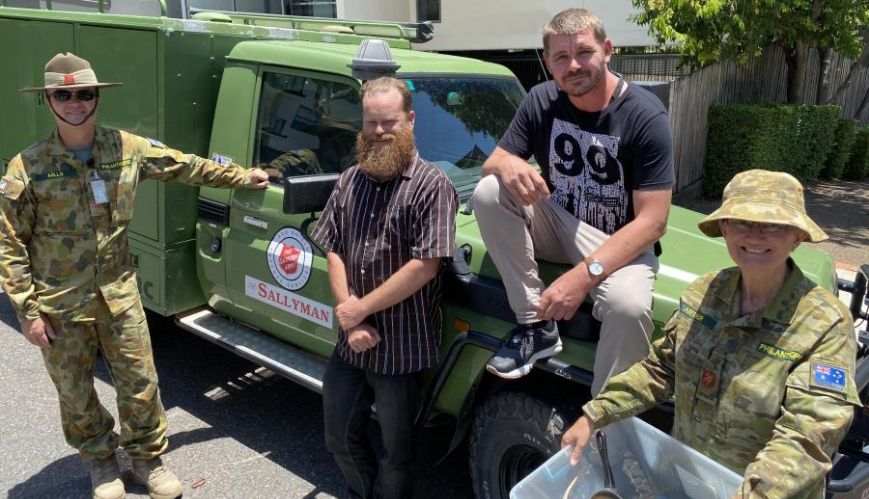 The cycle of homelessness has been broken for a veteran gunner, thanks to The Salvation Army Red Shield Defence Services (RSDS) in Brisbane and RSL Queensland.

After two relationship breakdowns, a battle with mental illness and nine months without a permanent roof over his head, Gavin Ellis says he now has a “normal house in a normal street” on Brisbane’s northside.

Salvos Housing and RSL Queensland’s Veteran Support Program (homelessness and crisis accommodation) played a major role in assisting Gavin, but it was The Salvation Army Red Shield Defence Services that stepped up to physically get Gavin into his new one-bedroom apartment.

Johnathon Dyer, The Salvation Army Veteran Support Worker in Queensland, said Gavin was one of the program’s many success stories. He said the RSDS at Gallipoli Barracks helped collect household furniture and bedding to furnish Gavin’s apartment.

Major Lauriee Arthur, the Army’s Officer in Charge at Gallipoli Barracks and an RSDS senior representative, and offsider Captain Robert Mills, pulled up in their ‘Sallyman’ four-wheel-drive vehicle and trailer, loaded up with items and then proceeded to walk them up the four flights of stairs to the top-floor address.

Before they left, Lauriee presented Gavin with a camouflage Bible and an RSDS military edition daily devotions book. Gavin, who has an 11-year-old daughter from his marriage and a four-year-old from a second relationship, said his immediate future looked brighter now that he had a roof over his head.

While his service in the Australian Defence Force did not involve any active overseas duty, he has seen the world, having visited 21 countries since he left the service.

He said he was living testament that soldiers were “never the same people” who left the service to those that went in. He enlisted at 17 years of age having “believed the glossy advertising” of a career as a soldier but continued to struggle with the mental health issues even after having been out for almost 30 years. In this time, he has had a stop-start career in computer science.

He said it took a lot of effort to settle back into life in Australia after his semi-nomadic life of seeing the world and “really greatly appreciate the work of The Salvation Army and the RSL in the care that they have provided me over the past nine months.”

“We [RSDS] are always looking for opportunities to link in with other mission expressions and enjoy the collaboration of other [Army] services when we are all working toward the same goal,” Johnathon said.

Between November and Christmas last year, more than 100 people were moved from temporary crisis accommodation into long-term, community-based housing around Brisbane, made possible through donations from the community that the Army was then able to turn “empty houses into homes”.

Salvos Stores was also involved, not only donating furniture but also providing vehicles and labour to move the items.