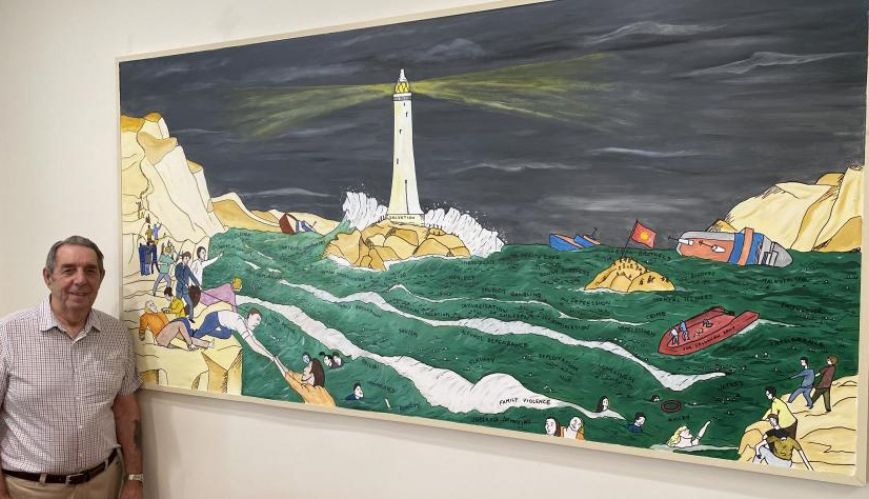 Barry Goodier, from Tea Tree Gully Corps in Adelaide, stands next to his biggest art piece yet – an interpretation of William Booth’s ‘Hope For All’ poster that the Salvation Army Founder designed in the late 19th century. The ‘Work For All’ poster that inspired Barry Goodier’s piece. This copy hangs in the Tea Tree Gully Corps.

For most Salvationists, if they haven’t seen it, they’ve definitely heard about William Booth’s poster that depicts The Salvation Army assisting the vulnerable, the needy and the trapped by their choices in life.

It was with Booth’s vision in mind that Tea Tree Gully Corps stalwart Barry Goodier painted his interpretation, which has just been hung in the foyer of the corps reception area.

His interpretation is more based on the contemporary ‘Hope For All’ image rather than the full original seminal work that appeared in the book In Darkest England And the Way Out, which was co-authored in 1890 by William and Catherine Booth and W. T. Stead. The image visualised the Army’s mantra to rescue people from ‘drowning in sin’.

Eighty-year-old Barry, who has been part of corps in the northern suburbs of Adelaide for about 20 years, was ‘commissioned’ by Corps Officers Captains Adrian and Lydia Hammond to produce the artwork to be hung where a noticeboard was once positioned in the complex foyer.

Little did Barry know that when a couple of ‘special visitors’ dropped by the corps that the painting would be officially unveiled and dedicated on the spot. The contemporary version of the lower half of ‘Work For All’ (renamed ‘Hope For All’) that Barry based his artwork on.

Those special visitors were the Australia Territory leaders, Commissioners Janine and Robert Donaldson, who were on a tour of Army mission expressions across South Australia at the time.

They visited Tea Tree Gully Corps to see the Employment Plus national call centre and the HealthLine program being run out of the facility.

Despite the artwork containing many components, Barry said the piece only took him “a few hours” to complete.

In reality, it took him about 10 hours over several weeks as he usually spent about an hour or so on it once a week on a Tuesday when he went to the corps. Barry took about 10 hours to paint his version of ‘Hope For All’.

Barry, who came to Australia in 1969 from northern England – “just outside Manchester” – with his wife and two children, said he used acrylic paint on the piece because it was not painted on canvas but the old noticeboard and needed undercoat and thicker paint. His usual landscapes were done using oil paints.

“I’ve never done anything of this size before,” he said. “Usually around 90cm by 45cm.”

The foyer piece measures 2.4m by 1.2m. “It’s a little hobby I have. I took it up more after I retired. I do it mostly to relax. I mainly do landscapes – some US; some Australian. I like gum trees. There are a few seascapes.”

Barry said he had sold some of his paintings; some of which were commissioned pieces.

Robert said the original Booth poster had had an impact around the world for all who saw it and prayed that God would bless the ministry of Barry’s depiction of the original work.