Berri Salvos Stores the pick of the crop 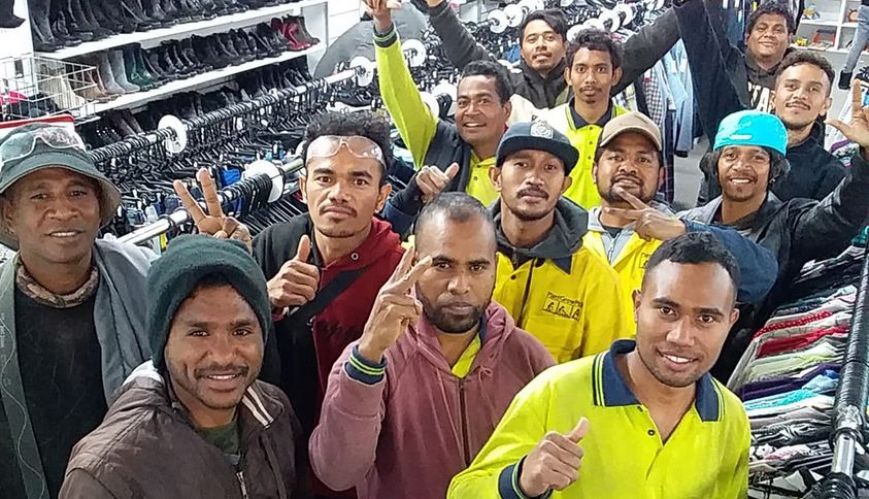 Berri Salvos Stores the pick of the crop

A happy group of seasonal workers on a shopping spree at Salvos Stores in Berri, South Australia.

Salvos Stores in the South Australian Riverland town of Berri is having a clearance sale – but not the type of bargain bonanza that would immediately come to mind and not one of its own making.

Store manager Helen Palena-Adamczyk said about 1000 international workers, part of the Australian Government’s Seasonal Workers Program (SWP), were in the region for the citrus-picking season and regularly descended on the store “in waves” to snap up men’s clothing. “They clean us out,” Helen said. “Demand is outstripping supply.”

Helen said there generally was a shortage of men’s clothing available through the Army’s second-hand clothing stores because men generally held on to their clothes longer than women. However, regular shipments from the main Salvos Stores warehouse in Adelaide kept the men’s section stocked. Helen said the workers mostly were from places like Tonga, Kiribati, Vanuatu and East Timor, with some from Fiji, Papua New Guinea and the Solomon Islands.

It was not uncommon for “eight or nine minibuses” of workers to turn up at the store for a shopping frenzy. “When it’s raining, we get wave after wave of them shopping in our store, [but] we enjoy having them in [the shop],” Helen said.

The men work on orchards in the area that encompasses Renmark, Berri, Waikerie, Loxton and Paringa. Paringa is the town where the workers spend their mandatory COVID-19 quarantine period before being permitted to work.

The Army in March this year won the tender to deliver the SWP as part of a $1 million, two-year Government Community Connections initiative, which was announced earlier this year.

The Army is running the SWP through its Community Engagement Department, coordinated nationally by Gregory Makutu. He said the program would provide specific support to workers, help them connect with the communities where they worked and “advance cultural understanding with the wider population”.

Greg said the Riverland area had the largest number of placement positions of any SWP location in the country.

Helen said she planned to connect with the workers outside the shop by providing regular sausage sizzles and involving churches in the area.