Liz Cruickshank, Australia Territory Secretary to the Property Trusts, with one of the scarves that were donated as part of a Woollens for Moldova initiative.

A project started by a group of women from Warragul Corps in the west of Victoria’s Gippsland two years ago could be woven into the fabric of the Australia Territory’s culture if the pattern of support being shown continues.

Liz Cruickshank, the Army’s Territorial Secretary to the Property Trusts, said the women, including her mother, had been knitting jumpers and sending them to Eastern Europe as part of an initiative called ‘Woollens for Moldova’.

However, the COVID-19 pandemic had created “some real challenges” with Moldova’s mail service, and the parcel they had sent last year was returned. Enter Liz and a team from Territorial Headquarters in Blackburn, Melbourne. 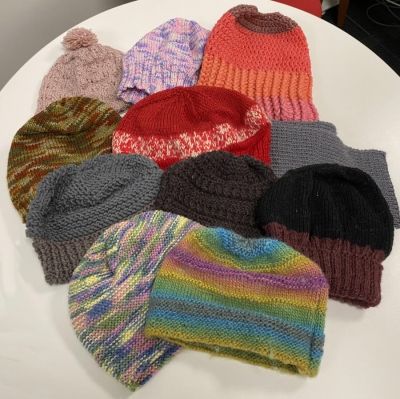 Some of the beanies and scarves being donated to Woollens for Moldova.

Liz reached out to Australian officers Colonels Kelvin and Cheralynne Pethybridge, who are serving as the Eastern Europe Territory leaders, to determine why the parcel was sent back.

“They put me in touch with the divisional commander for that area [Major Andrei Iniutocichin] who explained that, because of COVID-19, the postal service had effectively stopped,” Liz said.

Last year’s jumpers were sent elsewhere, but Woollens for Moldova is back on track and has ‘gone national’ with Liz taking on a coordinating role.

“I’ve been inundated with requests from people across the territory – Sydney, Brisbane Tasmania and parts of Victoria – asking me how they can contribute, which has just been fabulous,” Liz said. “I wrote to Andrei in Moldova and said: ‘Just giving you the heads up: We’re probably going to have a heap of woollens to send to you’.”

It was planned to send jumpers, but people offered to knit beanies, jumpers, socks, scarves and blankets “so I think I’m going to be sending multiple parcels to Moldova,” Liz said.

Liz is a self-confessed non-knitter. “When I was about eight, my grandmother tried to teach me, and I thought it was pretty boring. I had two older brothers and was more interested in playing cricket in the backyard and riding my bike, so I said to my mum: ‘If you knit, I’ll buy the wool’, so I’ve got my mum knitting up a storm.”

With so much support shown nationally, Liz said she was considering making Woollens for Moldova an annual drive. “I’m pretty excited that, as a territory, we can support the Eastern Europe Territory and express the love of Jesus in a very practical way,” she said.

Kelvin described the support coming from Australia as “wonderful”. “There is significant poverty in Moldova, especially in the villages,” he said. “I’m sure the jumpers will be appreciated.”

To find out how to support Woollens for Moldova, email Liz at liz.cruickshank@salvationarmy.org.au