Case worker Norah Kiruja interacts with a couple at the new-look entrance to The Salvation Army in Darwin’s refurbished House 49 accommodation facility for people experiencing homelessness.

The latest refurbishment of what could be described as the traditional epicentre of The Salvation Army’s mission and ministry in Darwin – at 49 Mitchell St – has brought a renewed sense of pride and respect to all involved in the project. 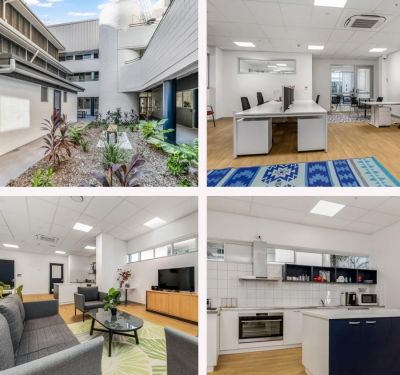 The new-look House 49 Darwin after the recent refurbishment that includes the new garden and reflection area, open-plan workspace, communal area and kitchen facility.

Fred Docking, the Army’s Service Manager and Northern Territory Coordinator in the Social Mission Department, said the ‘Sidney Williams hut’ that once occupied the address in the early days of the church’s presence in the Top End capital had been replaced with a bricks-and-mortar building about 50 years ago (after Cyclone Tracy in 1974) and had been renamed and recast in its now-refurbished state.

Fred said the site had “an incredible history” and was forging a new chapter of that history with the new transformation model at what is to be known as House 49.

Until early this year, the “decades-old” building was known as the Darwin Red Shield Hostel, but, with the completion of the two-stage, ground-floor refurbishment, it is now called House 49 due to its location in the street.

Retired Major Wilga Morris, who, with husband Major Hilton had several appointments in the Northern Territory between 1959 and 1996, including their last role as Regional Officers, said the Army’s work in Darwin was begun by Major Vic Pederson who negotiated a 99-year “peppercorn” lease with the government for the 49 Mitchell St property.

Wilga said the lease was due to run out around 2049. She said Vic had a Sidney Williams hut built on the property. This style of corrugated iron-clad accommodation was “everywhere” in Darwin from the late 1930s when thousands of Australian and Allied servicemen called the Top End home as Australia built its military defence presence in the north of the country and served the forces well during World War Two.

Along with the hut structure, four offices (rented to draw income) and a house were built. The house was “a typical Territorian three-bedroom house on stilts,” Wilga said. Some of those buildings needed to be demolished after being damaged when Cyclone Tracy, regarded as one of the most destructive storms to hit Australia, struck Darwin early on Christmas Day in 1974.

Wilga said a large warehouse was erected in 1975 to replace damaged buildings. It was divided into two: an area behind a blue curtain to store goods used in welfare and outreach work, and the rest was used as the worship centre: “They called it the Tabernacle.”

She said the original house was sold to a Salvationist family and moved – “they took it on a big truck” – to a site at Humpty Doo, about 40km south of Darwin. The house was still in that family today.

The warehouse was torn down in 1976, and the hostel there today was opened in October 1977. Wilga said the building was “so good” it won an award.

House 49 manager Danelle Batchler said using the new naming convention would hold special significance for residents who wanted to call the facility home and shake off the stigma that living in the hostel carried. “We’re building a sense of ‘we are a big share house; of looking after one another’,” Danelle said, where the resident had “some pride in their environment; a little bit of ownership”.

She said that, for some time, residents believed living in the facility sent a message to the community that, “I'm down and out and have to stay at a Salvos hostel”.

The Army also hoped its changes would mean the facility would be looked at as more of a home than a hostel. 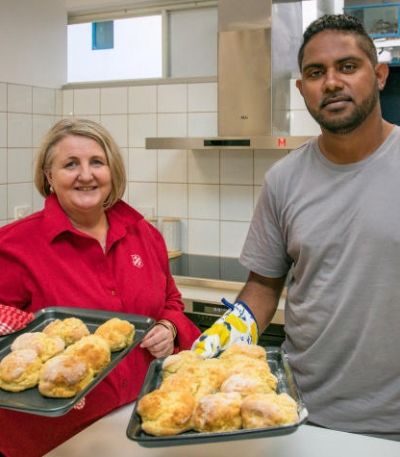 Fresh scones out of the new oven: House 49 manager Danelle Batchler with Damien Narul. Budget cooking classes are run at House 49 as part of a positive lifestyle program.

Danelle said the ground-floor refurbishment brought to completion an upgrade of the entire two-storey facility – which receives no government funding to operate. The upstairs bedrooms and shared bathroom and kitchen facilities had been refurbished more than 12 months ago.

Fred said the planning stage of the House 49 project had allowed the Army to liaise with government and private sector agencies about how it could also include a refurbishment of its service modelling.

He said that, traditionally, the site provided accommodation only to people experiencing some degree of homelessness, but the new model would include transitional housing support with an “assertive outreach” component.

House 49 now has an enclosed garden and reflection area, proving a popular meeting and counselling area. Danelle said other programs and activities were planned to give the residents “the feeling of home” such as a chicken coop and bird aviary.

She said that, previously, residents could stay at the facility for 12 months, but the shortage and affordability of rental accommodation in Darwin and some difficult qualification hurdles had meant stays were not limited.

House 49 accommodates men, women and couples over 25 years of age with no children.

“It is a program, so people agree to participate and engage with case managers on working on their goals,” Danelle said. “We don’t have a curfew. People are adults. They can come and go. We’re manned 24/7.”

She said having staff onsite around the clock meant that the residents could get “consistent responses and support regardless of the time of day”, which was important for the people experiencing such issues as mental illness.

“The Army should be proud of what they’ve done,” Fred said. “It’s really more than just a building. It’s about a whole [life] transformation.”