Young Salvo Ted Page-Walker is shining a light on youth homelessness with his video SOFA. It has been nominated as a Senior Finalist at this year’s national Videos for Change Competition.

Budding filmmaker and Salvationist Ted Page-Walker is a senior finalist in the national Videos for Change Competition. In a one-minute video titled SOFA, he puts a spotlight on youth homelessness and asks, “Next time one of your friends asks about staying over, think about why.” 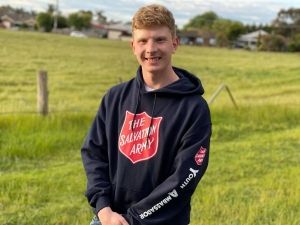 The title SOFA is a clever acronym for Stay Over For Awhile. It is a stand-out entry in the Videos for Change Competition, which invites high school students to create a one-minute video about a social issue they are passionate about.

As The Salvation Army’s first Youth Ambassador for Greater Geelong, creating a video about youth homelessness was an obvious choice for Ted. A volunteer with the Bellarine Salvos Outreach Street Team, he regularly meets people sleeping rough on Geelong’s streets. But, as his video shows, homelessness isn’t always visible. For many teens, it involves couch-surfing as they seek safety from domestic violence, abuse, and addiction.

Ted filmed SOFA with the help of the Bellarine Salvos community – and you can spot familiar faces in the story about teens asking extended family and friends for a place to stay. This is happening increasingly in the Barwon region, where youth crisis services have received 60 per cent more enquiries over the past two years. The video is the start of his SOFA project, which is enacted when people invite their friends to ‘stay over for a while’.

People can vote for Ted’s video until 25 October by following this link: bit.ly/VFCSOFA. Winners will be announced at the Videos for Change Virtual Film Festival in November.