'Money talk' on the cards for families 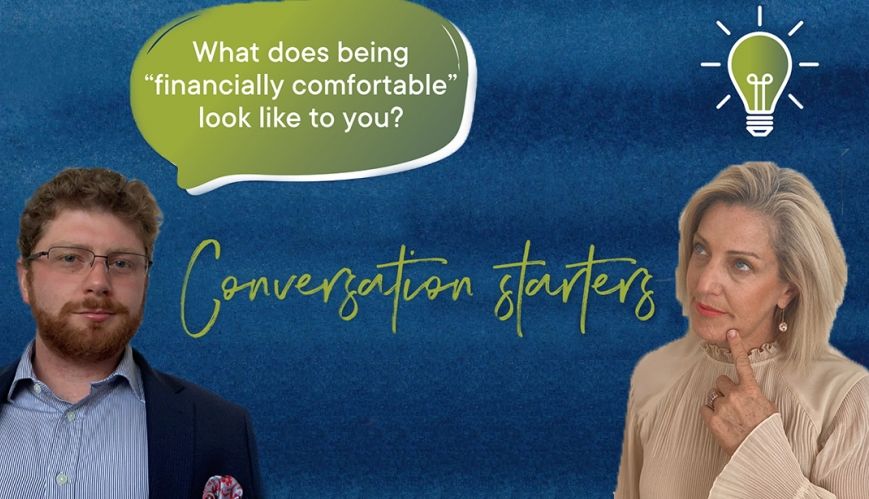 'Money talk' on the cards for families

Josh Gani, a policy and advocacy advisor for the Australia Territory’s Policy Research and Social Justice Department, and Kristen Hartnett, Moneycare manager for regional NSW and ACT – helping to remove the awkwardness of conversations around money. Artwork: Darryl Whitecross

“If you were given $1000, what would you do with it?” It’s a simple question, but when it comes to talking about money – along with religion and politics – it’s a topic Australians find awkward in general conversation.

Talking about the weather, the footy, a new outfit, or what kind of car you’re driving these days is fine, but bring up one of the other three topics, and people usually look for the nearest ‘out’.

As part of a recent national campaign around Anti-Poverty Week, The Salvation Army aimed to give people the tools and confidence to help remove the awkwardness of at least one of those – money – with a card series called ‘Conversation Starters’, aimed at the family.

Josh Gani, a policy and advocacy advisor for the Army’s Policy Research and Social Justice Department, said people needed to be comfortable having ‘money talks’. He said when planning a campaign to support people unable to make sense of their financial situation, he suggested ‘Conversation Starters’. He believed the card exercise would help people “talk about money more”.

Moneycare’s goal is to encourage adults to be more comfortable speaking about money issues and talk about them with their children. There was a question in the series for children around managing pocket money.

“I can imagine there’s a lot of families who are after something to talk about over dinner that isn’t the most recent episode of Bluey,” Josh said.

A different card or tip is shared online each day through various Army internet and social media portals.

Kristen Hartnett, the Army’s Moneycare manager for regional NSW and the ACT, said conversations about money were not necessarily confined to people already facing or at risk of experiencing financial hardship.

Kristen said that conversation was a vital part – the first step – of the support process and pivotal to helping solve poverty.

She said people needed help to recognise the signs of people at risk of financial hardship. The cards could improve that, and by ‘normalising’ conversations around money and cashflow issues, society would ultimately reduce the stigma and shame associated with discussing financial stress.

“We need to have [money conversations] with others within our family, and we need to have them externally; like, ‘Who else can help me with this situation?’,” Kristen said.

She said that speaking with experts in financial counselling and management should be as normal as speaking with a trainer about fitness.

Josh said some of the conversation starter cards focused on managing money, some on helping to identify and help people at risk, and others were more about the need for emergency relief.

Kristen said the COVID-19 pandemic had shown that no one was immune to financial hardship and that many people did not have the skills when life suddenly changed through job loss, reduced hours or lack of work opportunities.

She said the pandemic had caused a “different set of challenges” for many people.