With emergency services around the country preparing for the bushfire season, The Salvation Army in South Australia has called for more volunteer drivers to steer its fleet of heavy vehicles.

Major David Boughton, State Emergency Services and Disaster Management coordinator for the South Australia/Northern Territory Division, said it was essential to have about six or seven trained drivers on standby in the event of an emergency. At present, there were only three on the list.

Drivers wanting to volunteer for The Salvation Army Emergency Services (SAES) would need to have a current and valid ‘medium rigid’ licence or have a regular driver’s licence that could be upgraded. The drivers would also need to be able to get to the SAES depot at Pooraka, north of Adelaide, quickly as the catering trucks were required to be on the road within two hours of an initial callout, and the job could be up to four hours away.

David said the SAES truck-driver training course takes one day, with the morning spent in a truck honing skills and the afternoon being assessed.

The SAES in South Australia has two trucks that are used as central command posts for the preparation and serving of food, drink, and other essential supplies for first responders and victims of emergencies. The trucks are fitted with ovens, fridges, freezers, deep fryers, barbecues, and preparation areas.

In the lead-up to each fire season, David said the SAES liaised with other emergency services to be appraised of any forecasts for hot spots and watch areas. While that was still to happen for this season, the SAES was beginning its planning.

David added that the SAES needed drivers throughout the year as other critical weather events and natural disasters could occur at any time, many without warning. 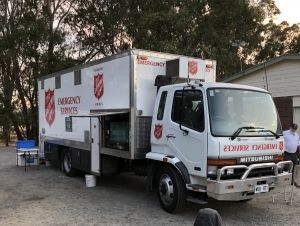 One of the SAES trucks that is taken out during an emergency in South Australia.

Colin Drew, from Gawler Corps in Adelaide, said being a volunteer driver for the SAES was a great community service. “I love driving, so I am happy to be involved,” he said.

One of Colin’s first jobs as a volunteer driver was to take the catering truck four hours overnight from the depot to a major fire so breakfast could be served to fire crews the next morning. He has since driven the truck to attend “all the major fires” across the state that the Army had been asked to attend.

Colin said he enjoyed being involved with the Army’s relief and supporting the network of firefighters, paramedics, and police. “It’s eye-opening ... you get to see how everything fits together to keep people safe,” he said. “What I find with the firefighters is that they are very grateful to be fed [after] they’ve been fighting a fire for 8-12 hours.”

David said without truck drivers such as Colin, the SAES would not get its vehicles to and from critical incident frontlines.

Anyone interested in being a volunteer driver with the SAES in South Australia should email David at david.boughton@salvationarmy.org.au