The Salvos have joined church leaders around the nation to call for global action addressing climate change. Photo by Markus Spiske on Unsplash.

Commissioners Janine and Robert Donaldson have joined church leaders from across Australia and the Pacific region in calling for the Australian Government to step up its part in global action addressing climate change.

“The damage to the environment for future generations and the disproportionately negative effect on the world’s vulnerable should motivate every Christian to action,” the Donaldsons said. “We all have a part to play.”

The leaders co-signed an open letter to the Australian Prime Minister, Scott Morrison, expressing shared concern over climate change and that Australia could be a leader and champion of more ambitious and innovative action before it is too late.

In the lead-up to the United Nations Climate Change Conference (COP26) in Glasgow, the letter urges the Australian Government to scale up Australia’s 2030 emissions reduction target to at least 50 per cent and ambitiously aim for higher to help limit global temperature rise to less than 1.5°C. It also calls for “a just and sustainable transition for communities currently dependent on carbon-intensive industries” and policies that support people, nations, and ecosystems that are most vulnerable to climate change.

As well as advocating for emissions reduction and stopping climate change, the Salvos support investment in community-level resilience and adaptation strategies that will ensure that the costs involved – such as increasing housing and insurance costs, improved building standards, and environmental protections – are spread evenly across the community.

“Governments have a role to play in assisting workers affected by industry transitions and providing information and modelling on the potential impacts for various groups within our society,” said Major Paul Hateley, Head of Government Relations for The Salvation Army Australia. “[So], we must ensure people living in increasingly risky areas who cannot afford to protect their homes or to retreat to a safer area, as well as people living in energy poverty or unsuitable housing who cannot meet increasing costs to maintain a healthy home environment, are provided for.”

General Brian Peddle, world leader of The Salvation Army, will also attend COP26 along with faith leaders from around the world. 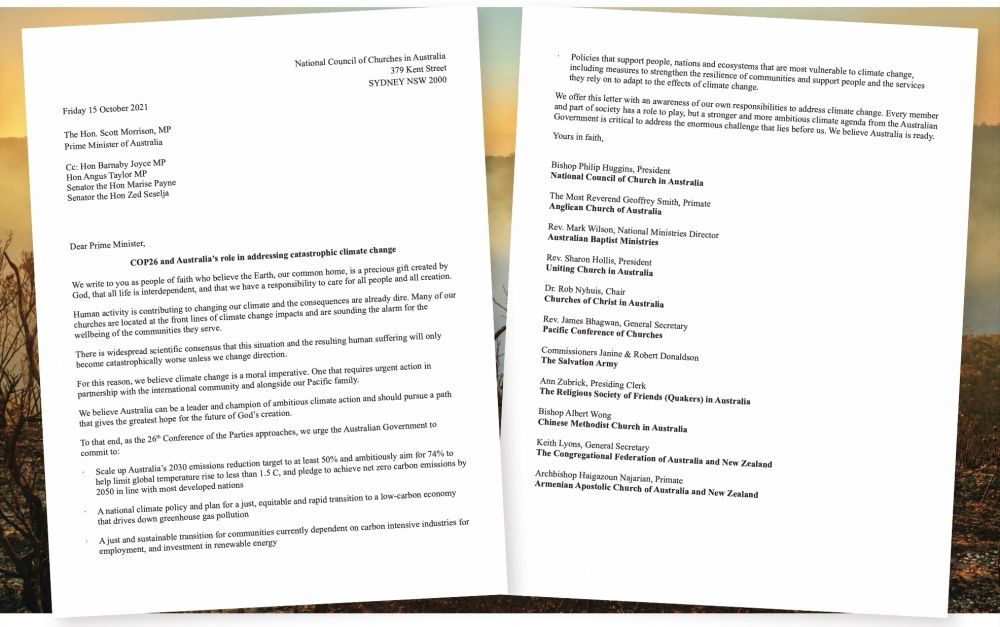 The letter sent to the Prime Minister by the National Council of Churches in Australia.