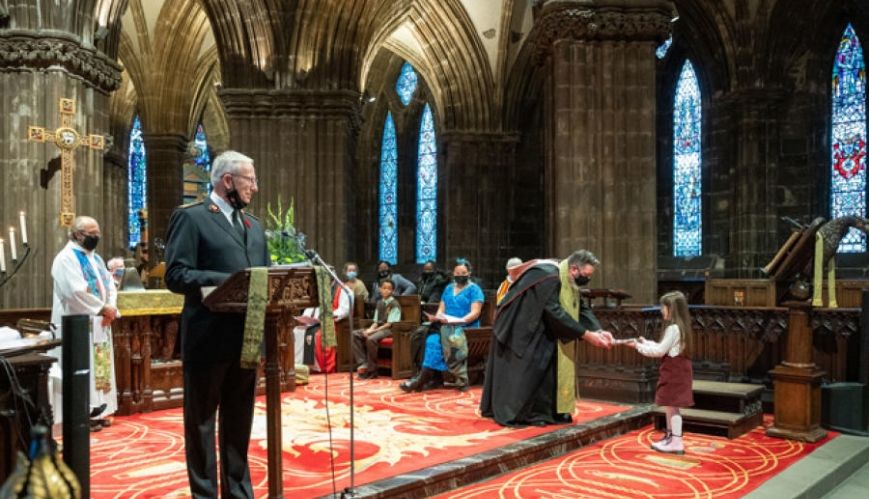 Islay Clark, the daughter of the Glasgow Cathedral master stone mason, presents her gift to Minister of Glasgow Cathedral, Rev Mark Johnstone, as part of a special segment facilitated by world leader of The Salvation Army, General Brian Peddle, at the ecumenical climate change service at the Cathedral on Sunday. Photograph: Church of Scotland official photographer John Young.

The world leader of The Salvation Army, General Brian Peddle, described it as a privilege to be involved in the ecumenical gathering of church and community leaders from across the United Kingdom at the Glasgow Cathedral last Sunday.

The service was held to pray for and support the two-week COP26 United Nations Climate Change Conference which finishes in the Scottish city today.

The General said it was a privilege that the international Salvation Army had been given a voice and a presence in the service.

"Notable and special moments occur when ecumenical colleagues stand together on an issue of mutual concern and do so on behalf of our faith communities," the General said.

"There was a sense of joint concern as we worshipped, prayed and articulated mutual concern for our world."

Along with prominent church leaders and other international guests, church leaders from Scotland were asked to invite young climate activists as guests to attend the service to support the UN conference in prayer.

Along with General Peddle, Commissioner Rosalie Peddle, the Army’s World President of Women’s Ministries, and Commissioners Anthony and Gillian Cotterill, the United Kingdom and Ireland territorial leaders, represented the Army at the service.

As part of the service, General Peddle reminded the congregation of God’s various gifts and facilitated a ‘symbolic act’ where children from the congregation brought gifts – including a Bible and food and drink – to be placed on the altar. The tile to promote the International Social Justice Commission survey. Scan the QR code to complete the survey.

Australian Salvationists are being invited to join others from around the world to take part in an International Social Justice Commission survey.

Adam Raine, an intern with the Research and Resource Development stream, said the survey, titled 'Social Justice Concerns of Salvation Army Members', would give the ISJC a broader understanding of the thoughts of everyone connected with the Army internationally.

Adam said it was hoped as many officers, church members (soldiers, adherents and regular attenders), employees, volunteers and service users would complete the survey by the closing date of 28 November.

"We want to know what people are concerned about; what they see and experience in the world around them," Adam said. "This will help us in what we focus on in our advocacy, our resource development and how we assist and network with Territories/Commands who are facing similar issues 'on the ground'.

"The more participants we have, the more reliable our data and the more we can do with it," he said.

Dr Laurelle Smith, a Senior Research Analyst with the ISJC based in New Zealand, said the survey was one of Adam’s main projects as a Commission intern.

Adam said it was the first time a research project of this nature had been run on an international scale.

“I know of some national projects (Australia only recently in fact), while international surveys have previously been officer-focussed," Adam said. "I believe this is the first time 'grassroots’ Army members have been able to have a direct input on social justice matters at an international level."

The survey was initially launched in late September on ISJC platforms but has since made a more widespread campaign to reaching new audiences in the run up to the closing date.

To complete the survey, click here, scan the QR code in the graphic above or go through the ISJC website here. 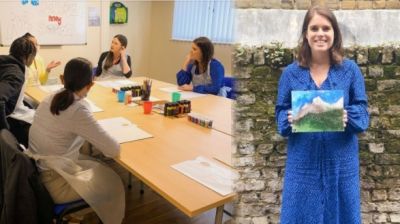 Her Royal Highness Princess Eugenie of York at The Salvation Army's London Outreach Hub and the painting she did during an art therapy session.

Her Royal Highness Princess Eugenie of York visited The Salvation Army's London Outreach Hub recently to mark Anti-Slavery Week in the United Kingdom and joined in an art therapy session.

In her role as co-founder of The Anti Slavery Collective, Princess Eugenie, listened as survivors of modern slavery spoke about their experiences before joining the session which created artwork around how each survivor felt about their new-found freedom. Last year, the group painted pots when she visited.

Jenny Gibson, who heads up the Army’s team of outreach support workers in London, said art was a wonderful way for the survivors to explore their feelings and find their voice.
Jenny said the artwork would form part of a collage to be hung at the entrance to the Hub.
The London Outreach Hub is one of a network of safe houses and outreach support run by the Army where survivors are given access to a range of services to help with their recovery. The services including counselling, medical help, legal advice, educational opportunities and assistance in finding a job and housing. Todd Andrews, the Director of Integrated Communications in the Western Division of the United States Central Territory, said the Tree of Lights was an Army initiative in collaboration with an Omaha bank and holiday-decor company.

A team at Ironworkers Local 21 and Moen Steel Erection spent days putting up the 75ft (23m) tree which is part of the Army's Tree of Lights Christmas appeal in the city. It has 75,000 LED lights and a 183cm star on the top

Todd said the tree lighting was televised this year. Last year, it was a virtual event because of restrictions around crowd numbers because of COVID-19.

"The event is now in its 16th year ... but the tradition of the Army lighting up a large Christmas tree in Omaha to start the season and kick off the associated Tree of Lights fundraising campaign goes back decades," Todd said.

Donations to the Tree of Lights campaign go to programs that provide food, heat, electricity and presents for families in need.

Last year, Omaha’s Christmas assistance programs provided Christmas gifts or food vouchers to more than 13,000 people. This year, the demand is expected to be much higher.