Solomon Islander Salvationists prepare to return home after being stranded for about three weeks in Honiara.

Solomon Islander Salvationists have been able to return to their villages after being stranded in the capital Honiara after celebrations to mark the 10th anniversary of The Salvation Army’s work in the country.

District Officer Major Robert Evans said about 85 people from three villages on the island Province of Malaita had to remain in Honiara for about three weeks. This was due to a combination of riots, subsequent curfews, overcrowding on ferries, bad weather, and king tides that prevented travel.

Robert said the Army was grateful for the prayer and financial support from Australia and New Zealand. These funds were put towards meals and contributed to their fares home. 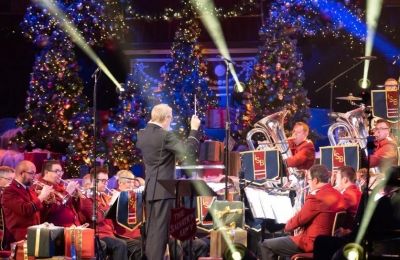 The International Staff Band performs at the United Kingdom and Ireland Territory Christmas Carol Concert at the Royal Albert Hall in London.

A star-studded list of performers took part in the United Kingdom and Ireland Territory Christmas Carol Concert at the Royal Albert Hall in London last week.

Major Karl Gray shared about serving on the frontline with the Army’s Emergency Response Service. The concert was repeated in a virtual carol concert premiere on the UKI Youtube channel on 12 December. 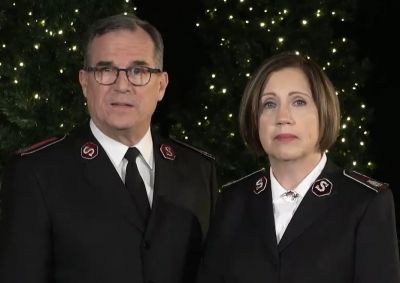 Commissioners Floyd and Tracey Tidd, former leaders of the Australia Territory, have focused on The Salvation Army’s need to support “struggling neighbours” in their Christmas message to the Canada and Bermuda Territory.

The Tidds, who took up leadership of the Canada and Bermuda Territory in July 2019 after six years of service in Australia, said many in their territory had felt the pressures of the COVID-19 pandemic and the effects of inflation over the past 12 months. They said The Salvation Army would continue supporting “struggling neighbours” with the critical resources they needed while working “to get back on their feet”.

Floyd said everyone was “worthy of being housed, fed, lifted and loved”, and Tracey said the Army would continue to work with the vulnerable in the community to show they were not alone in going through critical times in their lives.

Over the past year, the Army assisted 2.1 million vulnerable people in 400 communities across Canada, including 250,000 who received food support and gifts at Christmas.

Floyd said that, in times of uncertainty and confusion, people needed to remember the light that Jesus Christ brought to the world: “He is the only light that will never burn out. No more do we walk in darkness. The light has come.” 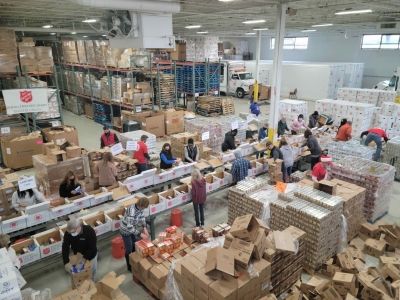 Each year, for one week in December, The Salvation Army Metropolitan Division Emergency Disaster Headquarters in Chicago transforms its warehouse into a giant food-box assembly line, with volunteers packing food boxes for families in need. This year, about 16,000 boxes – 1000 more than last year – were packed to give thousands of vulnerable families a festive holiday meal.

Volunteers work four-hour shifts to fill the boxes with the ingredients to prepare a holiday meal for a family of four – including cranberry sauce, biscuits, gravy, stuffing, and dessert. Each box is paired with a turkey or chicken.

The boxes are then distributed across the Chicago metropolitan area through the Army’s 28 corps and community centres.

Major David Dalberg, the Divisional EDS Director in the US Central Territory, said the Christmas food boxes were a “gift of hope and kindness”.