'Armstrong' figurine moves from office to the citadel 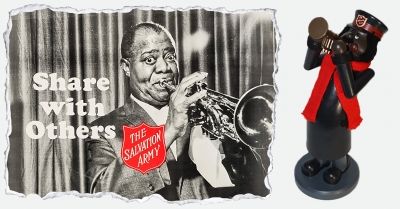 History records that, back in the 1960s, jazz trumpeter Louis Armstrong was the popular “face of The Salvation Army”, with a poster of him playing his trumpet and the words “Share with Others” emblazoned across the image.

Captain Patricia Williams, Corps Officer at Milwaukee Citadel in Upper Wisconsin and Upper Michigan Division of the United States Central Territory, said she believed the renowned jazz musician had also been immortalised as a figurine she usually has sitting on the desk in her office. The rare figurine has an Army cap, a long black tunic, and a red scarf. “The figurine, I believe, is supposed to be of Louis Armstrong,” Patricia said.

The piece usually sits on Patricia’s desk but, for Black History Month, it is sitting on the Holiness Table in the Milwaukee Citadel.

Sylvia Williams, Corps Sergeant Major, also has one of the figurines that sits on her desk. Sylvia, who has been part of the Army for more than 30 years, said she grew up in Wisconsin and never saw any Black art in The Salvation Army. Seeing the figurines made her realise that African Americans were in the Army.

She said she was encouraged to seek more information from books such as Soldiers of Uncommon Valor: The History of Salvationists of African Descent in the United States.

The women say that African Americans do not usually see themselves represented in material goods and rejoiced when they could buy the limited-edition figurines through The Salvation Army’s Trade Central. “We receive many questions inquiring about the figurines,” Patricia said.

She proudly shows the stamp of authenticity for the piece, which indicates the 1998 Zim’s Inc piece was number 0195/7500, burned into the base of the timber figurine. The official name of the piece is the African American Salvation Army Trumpet Horn Player from the Zims Heirloom collection and is listed as rare. One of the properties in Point St used by Larne Corps during its 135 years. This was the building visited by Ireland divisional leader Colonel Chris Webb during her cadet out-training.

Commissioners Anthony and Gillian Cotterill, leaders of the United Kingdom and Republic of Ireland Territory, were the guests for the weekend of celebrations marking 135 years of the Army’s presence in the busy port city of Larne on the east coast of County Antrim, Northern Ireland.

Corps Officer Lieutenant Philip Cole said the celebrations, which were held on 5-6 February, included a ‘Church and Community Centre Open Day’ on the Saturday and a commemorative worship service on the Sunday. The Cotterills led the Sunday worship, which was also attended by Colonels Neil and Chris Webb, leaders of the Ireland Division.

Philip said Chris’s connection to the corps dated back to a visit she made there as part of her cadet training about 40 years ago when it was in Point St. The corps now is in Main St. “Point St was certainly home [for the corps] for a long time, but now the street has very little footfall and activity,” Philip said.

The Mayor of Larne Borough Council, Cr William McCaughey, attended the weekend's events and said he was encouraged by the corps' objective of "putting people first".

The corps made headlines in the Larne Times in May 1909, recording that a fire had gutted a building it operated from in Point St. The newspaper praised the fire brigade for having stopped the spread of the fire to other buildings in the street building but did not indicate the cause.

As part of the celebration events planned for the year, Philip said that cadets from William Booth College would lead events over the Easter weekend: “This will include Good Friday and Easter Sunday services, an inter-church walk of witness through Larne town centre and a community event. This is an integral part of their training,” Philip said.

The corps opened on 2 February 1887 and has operated from several different premises over the past 135 years.

He said the corps history books, photographs, and artefacts were on display during the open day, supported by the Larne Museum and Arts Centre. The centre provided a glass cabinet to display such delicate items as old concert tickets, brochures, and photographs. A buffet lunch was served.

A team of emergency services workers and members of Port Maria Corps in St Mary, Jamaica, worked hard during several days of torrential rain over the Caribbean islands to empty the corps building of water after knee-deep floodwaters inundated the complex. The flooding damaged the corps facility and displaced scores of town residents.

In neighbouring Haiti, rescuers evacuated people in high-risk zones, where thousands of homes were flooded and about 2500 families displaced.

Authorities in Haiti reported that the storm had affected areas still recovering from recent major earthquakes, including 5.1 and 5.3 magnitude quakes on 24 January and a 7.2 magnitude earthquake in August last year. People around the world who collect public donations for The Salvation Army every year use receptacles of all shapes and sizes.

These collection tins or buckets or boxes or jars or bags, known in many countries as ‘kettles’, are an important tool on the streets, at public transport terminals and even hotels. They enable volunteers to connect with the public and raise vital funds to support the Army's work throughout the year.

If you have wondered what happens to those vessels when they’re not being used, the Army’s international Facebook social media site has given a hint. It posted a photograph from Finland showing kettles, which were put to good use over the Christmas period, stacked and stored “having a well-earned rest”.
The Army continues to be grateful to all the people around the world who volunteer to raise money throughout the year – often in extreme weather conditions – and to the people who give money that enables the movement to help the vulnerable in the community.