EVERYDAY SALVO: Les lasts the distance for the Salvos EVERYDAY SALVO: Les lasts the distance for the Salvos

Wyndham City Salvationist Les Porter has cycled 12,000km over 12 years to raise funds for The Salvation Army. Known as the Wyndham 1000, he uses the annual ride to tell people about how Jesus has changed his life.

The sight of Les Porter whizzing around on a tricycle is an everyday occurrence in Werribee. Since 2010, the Salvationist from Wyndham City Corps, south-west of Melbourne, has cycled 1000km every year to raise funds for The Salvation Army.

Les has raised a quarter of a million dollars in the Wyndham 1000, an annual event that takes place over a month. But he couldn’t do it alone. This is a community effort, which makes sense when you hear how his passion for tricycling came about. Les developed a love of tricycling after an accident in 1987, around the same time he became a Christian ... and he’s never looked back.

“I grew up in a Baptist household. I’ve always known about God but didn’t become a Christian until after my accident in 1987 when, as a pedestrian, I was hit by a car,” he shared.

Les was left partially disabled due to a brain injury, and his balance was impaired. The first adult tricycle was provided by the Transport Accident Commission to enable Les to get around. He soon felt at home on three wheels.

“My left side doesn’t work, so a tricycle was able to keep me stable, and with 18 gears specially fitted, my one leg that works was able to go the distance. I started riding it and, after that, I asked what I could do to raise funds for the Salvos!” he said.

Drawn to The Salvation Army because the movement reflected his faith and life values, he became a soldier at Werribee Corps [now Wyndham City] in 2008. But his involvement with the Salvos – and the wider community – bloomed prior. He began speaking at schools and community groups, telling locals how he overcame his struggles. Les cycled solo from Port Augusta in South Australia to Werribee in 1998 and later from Swan Hill to Werribee, raising funds for The Salvation Army.

“My belief is that I can’t do a lot of things I used to, but tricycling is the thing I can do for the community with what I do,” he said.

Les later approached his then corps officers, Captains Lance and Ann Jeffrey, and asked how he could support the local Salvos with his wheels. Soon the Wyndham 1000 was born, and over a month, he raised funds while riding 1000km. And given the circuit through Werribee is approximately 30km, that’s no small feat! 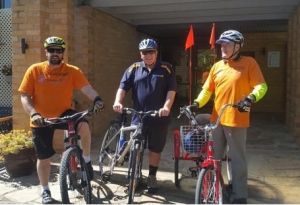 Les (right) has received support for the Wyndham 1000 for Salvos and community members alike. Pictured here, Wyndham City Corps Officer Captain Phil Abram and a member of the local Rotary Club join him for a leg of the journey.

Last year was the 12th year of the Wyndham 1000, so 12,000km had been ridden so far. Other Salvos and members of the community, schools, and the Wyndham Rotary Club also wanted to make a difference, and over the years, they have ridden the fundraiser with him.

Wyndham Rotary Club sponsored the cost of three tricycles worth over $1000 each. Because, while his speciality tricycle is hardy, the sheer distances he rides means it won’t last a lifetime,  and tricycle number three is now approaching its last kilometres. For Les, this generosity is God in action.

God didn’t just save Les in the weeks following his accident, he gave him a mobile way to connect with the community – inviting people of all ages and backgrounds to use what they have for good. And the reason for it all is Jesus.

“Before I came to know God, I loved my work – I was a workaholic, that was just me. Since becoming a Christian, I have found a new joy in the Lord,” he shared. “I remember after speaking at several schools, one of the principals even asked if I could talk with his staff! Every time I make a point that I love what I’m doing and I enjoy life. This is a different sort of happiness – it comes from Jesus.”