Red Shield Appeal kicks off around the nation 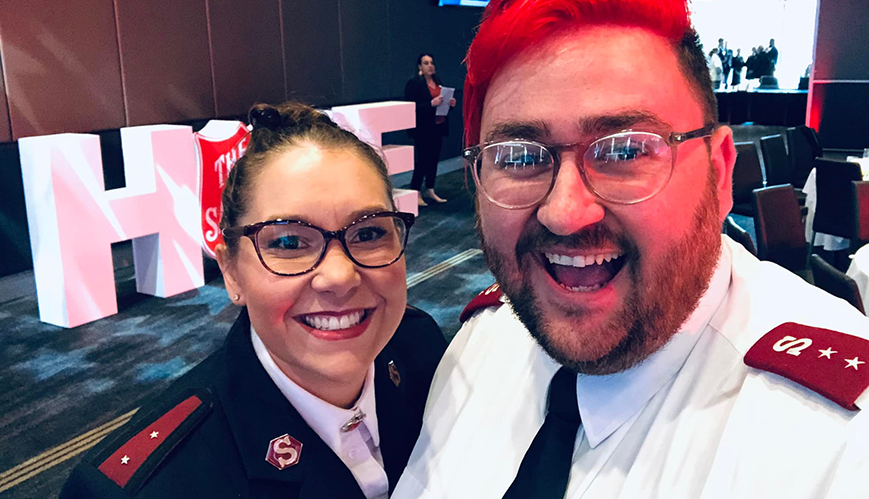 Red Shield Appeal kicks off around the nation

Captains Lauren and Aaron Stobie at the South Australian launch of the Red Shield Appeal. Aaron has promised to shave off his red hair if he raises $6000 for this year’s Appeal.

A hair-raising time for Captain Aaron

His hairdo has been a vibrant red for more than three years, and he has promised to shave it off if he raises $6000 for the local Red Shield Appeal! He calls it the ‘Bye Bye Red Hair’ fundraising campaign and concedes, “I have no idea what I’ll look like bald ... but I guess we will find out if we raise $6000!” His fundraising tally stands at $1500.

But that’s not all he is contributing to the cause. At the state launch of the Red Shield Appeal held at Adelaide Oval earlier this week, Aaron and his wife, Captain Lauren Stobie, led everyone in song. What a treat!

Serving up hope in Tasmania Captain Johnmark Snead collecting on the streets of Hobart during the corps’ ‘Red Day’.

Launceston Salvos got their Red Shield Appeal campaign off and running by promoting a local cause at their launch.

Launch attendees generously supported local intiatives like the corps’ breakfast program that runs six days a week out of their Elizabeth St building. Every Tuesday, Thursday and Sunday, people in need come to the corps and are given a takeaway box filled with fruit, cereal and a cup of coffee, while on Monday, Wednesday and Friday, they are provided. hot breakfast in partnership with WayFM.

Launceston junior soldier Maya Brown was at the launch and received a shout-out from local MP Michael Ferguson for doubling her $200 goal to raise money for The Salvation Army’s emergency relief and street programs. Way to go, Maya!

Earlier in May, Hobart Salvos went all out during their ‘Red Day’ promotion, dressing to impress as they attended the Sunday service and walked the streets of Hobart to fundraise.

Corps officers Captains Nicole and Johnmark Snead led the way, supported by a host of volunteers, staff and even a dog or two! 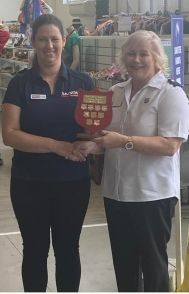 The Red Shield Appeal has kicked off in NSW.

On a musical note, the Wollongong Corps band is serving up a symphony of sound with the BlueScopeYouth Orchestra this weekend at the 2022 Red Shield Appeal Concert.

The annual event has been held at the corps for more than two decades. All ticket sales go towards The Salvation Army First Floor Program (holistic and family-inclusive counselling and support service) and Carinya Women and Children’s service (crisis accommodation).

The Red Shield Appeal has also well and truly kicked off across the rest of the state with an official launch in Sydney West and Newcastle. Staff at Salvos Stores across the Illawarra are also gearing up for this year’s appeal. Last year, the Wollongong store raised more than $40,000.
This year, store manager Joanne fulfilled her word after promising to dye her hair if the store raised more than $10,000 last year. With a tally of $14,000, she dyed her locks all the colours of the rainbow and was joined by assistant manager Deb and volunteer Annette. 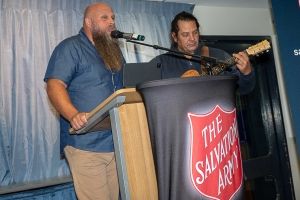 Emcee for the launch was Colin Usher, pictured here with guitarist Kyle Slabb.

Local flood relief, family and domestic violence and recovery from alcohol abuse were the main issues highlighted at the Tweed Heads launch of the Red Shield Appeal. The guest speakers, and Salvation Army videos presented, shared information about Salvation Army services in these areas and how they continue to support those impacted, their families and communities.

Guest speakers included Senior Sergeants Adam Cordner and Jacinta Pannowitz, Officers in Charge at Browns Plains and Loganholme Police stations respectively. They each shared how domestic violence had impacted them professionally and personally and their desire to educate communities about the issues and support victim-survivors. The officers have formed a partnership with The Salvation Army and their fledgling foundation, Dignity Blooms.

Alan ‘Chook’ Rossiter also spoke, sharing his struggle with alcohol, his rehabilitation journey with the Salvos, and how the Salvos “loved him when he was unlovable”. Alan is now a volunteer at the Gold Coast Temple Corps and works with the Extended Care program for rehabilitation graduates. Major David Terracini, Area Officer in South East Queensland, concluded the event in prayer.

A passion for collecting and counting Collecting for the Red Shield Appeal is a labour of love for Mavis Stupple, a Salvationist from the Sutherland Shire of Sydney.

“I love collecting because of the human contact,” she said. “Sometimes people need someone to talk to.”

Mavis and her husband started attending Miranda Corps (now Shire Salvos) in 1970. They were overseas for work for a number of years but always came back to the Shire. “I have worked at Shire Salvos for the last 23 years doing the accounting for the Red Shield Appeal. I’ve also collected for the appeal. It’s my service to the Lord.”

Mavis is a familiar face at her local shopping centre during the Red Shield Appeal campaign. She sits behind her collection desk, greets shoppers with a smile, and is always available for a friendly chat.