All hands (and paws) on deck for the Red Shield Appeal All hands (and paws) on deck for the Red Shield Appeal

Celebrity Chef Gary Mehigan (left) lent a hand at The Salvation Army Melbourne’s Project 614 last week, cooking up meals and chatting to guests with Major Sandra Nottle. And it was all paws on deck for The Salvation Army in Tasmania as they ramped up collecting at the Common Ground Cup golf fundraiser.

Cooking up a storm in Victoria 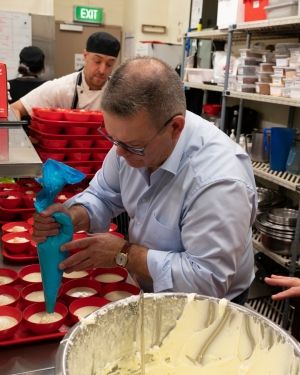 Gary Mehigan on the piping bag in the Project 614 kitchen.
The Salvation Army’s Project 614 is known for cooking up generosity in Melbourne’s city centre, but the quality coming out of its kitchen went to another level when Celebrity Chef Gary Mehigan stopped by to lend a helping hand to raise funds for the Red Shield Appeal.

Accompanied by corps leader Major Sandra Nottle, Gary chatted with staff, volunteers and community members about the vital work being done to support those in need in the heart of Melbourne. And, of course, he also had to get into the kitchen to put the finishing touches on some of the meals going out that day.

The Melbourne launch of the Red Shield Appeal took place down the road, where Divisional Commander Colonel Kelvin Merrett presented the Myer Community Fund with the Others Award. The award recognises businesses or an organisation that exemplifies an extraordinary spirit of service to others through the support of The Salvation Army and the broader community. Last week, we reported that North East Salvos Captain Aaron Stobie would shave his red locks if he raised $6000. We are happy to say he has reached his quota, and the hair is going – but he’s not the only Salvo giving up their curls for the cause!

In Seymour, just south of Victoria’s Goulburn Valley, Captain Heather Stamp and Major Michelle Myles have promised to shave their heads if they collect $2000. Given that the corps is hosting a trivia evening in early June, it looks like they will be purchasing beanies for the winter months as they edge closer to their goal.

Kids across Victoria are also stepping up to help people doing it tough over winter. In Shepparton, St Mel’s Kindergarten is running their second ‘Sock Drive’. Started by Meghan Dodd in 2021, they donated 225 pairs of socks to the local Salvos, giving people’s toes some much-needed warmth as rural Victoria goes into winter.

Kids on the Mornington Peninsula are also using their skills to make a difference in this Red Shield Appeal. Corps Officer Aux-Lieutenant Debra Taylor and the team have asked them to use Lego and build something that represents their community. The creations will be displayed for the public at the corps on 28-29 May. 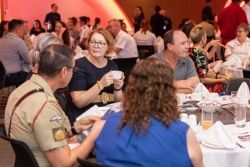 The Salvation Army, the business community and Defence personnel, mixed at the Northern Territory launch of the Red Shield Appeal.

Guest speakers shared information and stories about family and domestic violence, historical partnerships between the Australian Defence Forces and The Salvation Army and the range of services the Salvos provide throughout the Northern Territory. These services are centred in Darwin, Katherine, Alice Springs and surrounding areas.

“It was such a great opportunity for The Salvation Army officers to mix with the business community and vice versa,” said Major Kaye Viney, Area Officer, Northern Territory. 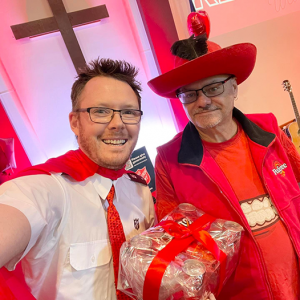 Meanwhile, at Launceston Corps, new soldier Karrolleanne was enrolled by Aux-Lieutenant Roderick Brown and Cadet-in-Appointment David Bruford. And in Huonville, Cygnet Primary School hosted a Red Day. Principal Williams spoke about the Red Shield Appeal and supporting others, while students celebrated by dressing in red and giving a thumbs up.

Parafield Gardens Corps also held a Red Day to coincide with the Red Shield Appeal launch. It was filled with red cupcakes, fellowship and fun galore. Corps Officers Lieutenants Aaron and Keryn Coombes came dressed to the nines, but congregant Lindsay Curtain took home gold in their costume competition. Just take a look at that hat!

A novel approach in NSW and Queensland

Over in the NSW Central West city of Orange, locals raised an estimated $150,000 at their local pre-launch, exceeding expectations by more than $130,000!

MC Tony Rodd, of Westpac, called the effort ‘magnificent’ and said it was the best fundraiser they had seen in two decades. Divisional Commander Lieutenant-Colonel Miriam Gluyas was also present.

The Temora Salvos hosted their launch with the goal of raising $10,000 for local services. Temora Citizen of the Year Jill Dunn and Mayor Rick Firman joined Aux-Lieutenant Caleb Smith to speak at the event and encouraged the community to get behind the Digital Doorknock or donate at a Westpac branch.

Local communities are also backing the Salvos across Queensland. In Noosa, the Rotary Club has received more than 18 pallets of donated books for a book fest. An expected $20,000 will come from the sale of the books, which will go towards The Salvation Army’s homelessness services in the region. 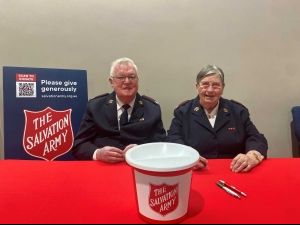 What corps do you attend?
Perth Fortress

How long have you been collecting?
We’ve been collecting for the Red Shield Appeal since its inception in the 60s when stationed at Eaglehawk in Victoria.

Why do you love collecting for the Red Shield Appeal?
We do it because we believe in the mission of the Army and want to advance the ministry of bringing people to know Jesus. We are encouraged by the positive responses we receive from the public.