Today is a day to honour two people who birthed a worldwide movement that has impacted millions of people worldwide with the love of Jesus.

How important is an apostrophe? Is it Founder’s Day, Founders’ Day or simply Founders Day?

And why has this day that celebrates the birth of The Salvation Army been recognised on so many different dates? Over the years, it has been celebrated on 10 April, 20 August, 5 July and the current date, 2 July.

The Salvation Army International Heritage Centre states that “it appears the term Founders’ Day (plural possessive apostrophe) was used from 1924 onwards, however there has [since] been some inconsistency ...” 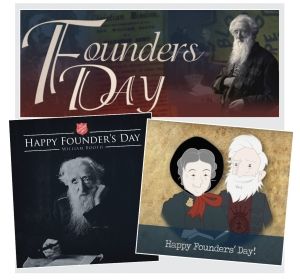 This inconsistency became increasingly consistent in the use of Founder’s Day (singular possessive apostrophe) throughout the 20th century, as it became generally accepted that the day was marked to honour the occasion in 1865 when William Booth held his first Tent Meeting as the leader of The Christian Mission, which changed its name to The Salvation Army in 1878.

Towards the end of the 20th century, there was increasing pressure to acknowledge Catherine Booth’s role in the formation of The Salvation Army and the fact that the success of the movement lay with the passion and vision of both Catherine and William.

Today, the stance by International Headquarters is that it be known as Founders’ Day.

However, Australian Salvation Army historian, Major Ken Sanz, believes the issue of the apostrophe is a “red herring”, and there should never be any apostrophe, preferring Founders Day.

It seems that, like much of Salvation Army history, there are differing opinions and accounts, but the reason for the day itself has never changed. “It was never meant to be a ‘worship Saint William’ day,” says Ken, “but an occasion for looking at where we have come from, where we are now and encouragement for the future.”

His view has been supported over the years by various Army territories, which have dropped the apostrophe altogether in their publications and promotional material.

Despite the confusion and ongoing conjecture, The Salvation Army around the world pauses to officially celebrate Founders’ Day on 2 July each year.

But there are still several unanswered questions about the actual date The Salvation Army sets aside to celebrate its birth.

But what’s the right date? A War Cry edition from 1924, showing the use of Founders’ Day with a possessive apostrophe, but celebrated on “Saturday, July 5th, the Anniversary of The Army’s birth”.

One of the uncertainties is exactly when Founders’ Day began and what date we should celebrate the birth of The Salvation Army. Lindsay Cox, The Salvation Army Australia Museums Manager, says there are “disparate sources” but supplied information that he had at hand.

We can assume that informal celebrations of William Booth’s life and his role in the formation of the Army probably began the year after his death, in August 1913, with Salvationists naturally coming together to share memories.

In her book, Bramwell Booth, author Catherine Bramwell-Booth states that Founders’ Day was instituted by General Bramwell Booth, the son of William Booth, in 1923, “and at the Mile End in July 1924 he led the first celebration” ... on 5 July.

Sixteen years later, that date was changed to 2 July, which, according to Salvation Army historian Colonel Robert Sandall, was the anniversary of the first Tent Meeting.

“Records of unimpeachable authenticity establish beyond all question that the date of the founding of The Salvation Army was Sunday, July 2nd, 1865,” Colonel Sandall wrote in The War Cry edition of 6 July 1940.

It took 75 years to settle on this date, but Founders’ Day has remained on 2 July ever since ... well, mostly.