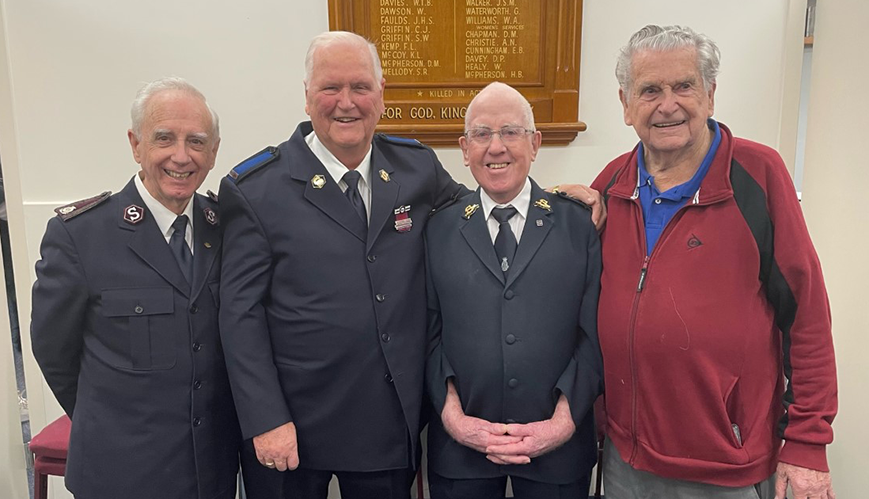 Lifelong friends back together at Moreland City Corps as they celebrate Ian’s service as a bandsman. From left: Commissioner Doug Davis, Ian Wright, Robin Waterworth and Ray Belt.

The name Ian Wright is synonymous with dedication – and after 70 years of continuous service playing with the Moreland City Corps band, it’s little wonder a crowd came to celebrate his achievement.

Presented with an award by Divisional Commander Colonel Kelvin Merrett, more than 50 friends, past and present, from Moreland City Corps came to honour the Salvationist in June. And naturally, Ian wanted nothing to do with it.

“When I realised where we were at in terms of [Ian’s] length of service, I said to our corps officer, Captain Lilian Platts, that we have to do something – he’s eligible for a 70 years long service badge!” laughed Band Sergeant Commissioner Doug Davis.

“There was one obstacle to get over – we knew Ian wouldn’t want us to do anything. So, I had to say to him, ‘You may not want this, but we want this.’ We wanted Ian to know and believe our utter admiration and respect for him.”

Ian’s history with the Salvos is intrinsically linked with Moreland City Corps in Melbourne’s inner north. The junior band was formed in 1946, and then a young teenager, Ian was invited to take a seat playing the B-flat bass. Five years later, he was invited to join the senior band along with Ray Belt. And even while enlisting as a National Serviceman at Puckapunyal during the 1950s, Ian continued to serve in the corps band.

He still plays the same instrument today and is also the oldest serving member of the Red Shield Band – a specialist at playing deep pedal notes that resonate tone-fully as a foundation to long music chords. But it’s not the deep bass tones of his instrument that he’s recognised for – it’s his enormous friendliness and ability to keep on keeping on.

Doug knows this better than most. He joined the Moreland City Corps band the same year as Ian and Ray and Robin Waterworth. Along with time spent together at school, the friendship they forged was deep and continued even as Doug was commissioned and appointed across the world. It’s worth noting that Ian was Doug’s best man at his wedding – so it seemed fitting that this 70-year celebration of service took place where their friendship started.

“I was the little kid [when I joined the band], and I remember the strong Christian presence of the older men in the band. Their example, their witness and their good influence,” said Doug.

“When I think of Ian, he set a very strong example of a Christian marriage in the way he cared for his wife [before Dell’s promotion to glory] and maintained his commitment as a bandsman against all of that disheartening personal experience.”

While Ian never sought acclaim for his service, it seems fitting that people flocked to honour their friend, fellow bandsman and Everyday Salvo in a humble ceremony. He truly is the heartbeat of Moreland City Corps.